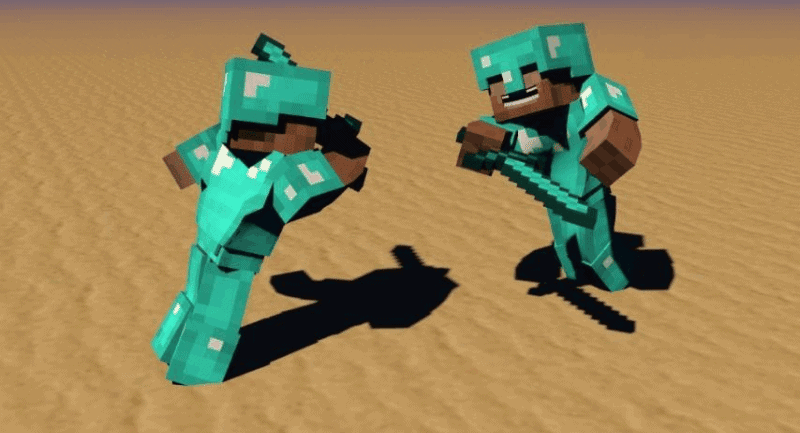 Are you finding it hard to win PvP battles in Minecraft? Don’t worry we got your back! we are here to make you a master of PvP Battles. We are listing our 10 best PvP tips and tricks which you can consider next time entering a PvP battle.

It is very hard to win a PvP battle without having better Enchantments than the opposite player. You should wear the gear which helps you protect from thorns, fire, and should be unbreakable. In this way, the player will take less damage while battling. For swords, you can try some god enchantments such as Sharpness, Smites, and Knockback.

When it comes to PvP battles the most basic thing which is needed is clicking as fast as you can. Nothing can help you without having mastery over clicking. Get a good gaming mouse and start practicing at PvP servers. You can also try autoclicker to automate your clicking.

You cannot afford to be bad at aiming since it can cost you a PvP battle. Irrespective of weapons or high click speed, if you are not good at aiming you will surely taste defeat. So practice aim in servers and then call out your opponent to see the difference.

You don’t have time to change your food, weapons, or even access your inventory when you’re fighting. The Hotbar is useful in this situation. You store all of the war gear in it, including your bow, sword, strength potions, golden apples, and much more. Use your number keys to practice utilizing the Hotbar items. This is the quickest method of combat.

You must have seen some players using the fishing rod in PvP battles, but they are for fishing right? Yes indeed they are for fishing but they can serve as a great tool in PvP battles. You can use a fishing rod to pull your enemy closer and then attack him with the knockback sword to send back. This will shock your opponent and certainly gives you a thick edge in winning. This tip is extremely useful even in close combats.

To be actually good at PvP, you need to do some serious PvP grind. You can join any of the PvP servers and start practicing with the players. These specific PvP servers have some seriously good skills and can help you in inheriting those skills. Most of these servers provide you with a beginner PvP kit so you don’t have to think much about the resources. You will be provided enough of them to start your practice.

This is the most underrated problem which Minecraft PvP players suffer. You must have seen some players using bows and arrows to the enemies even if they are like 3-4 blocks away. Ideally, which should have been done through a sword. You should use your weapons wisely and know the range which is best suited for those weapons.

In version 1.7 it appeared for the very first time in Minecraft. Since then it changed the PvP battles forever. With sprinting you can quickly chase your opponents or run away from them. So having a command over this skill is necessary for PvP battles. It might seem easy and basic at first but to master this skill is a different ball game, so start practicing it and see your results in a real PvP battle.

Strafing can be defined as the type of movement in which your player moves continuously in circles. Sprinting is advantageous in dodging attacks but when you attack, the motion stops. So to avoid this you have to be a little circular in your movement and jump while you attack. This will result in taking less damage and help in positioning you for the next attack.

Have you noticed that some attacks just do more damage than normal ones? Those attacks are considered a critical hit and you can improve the frequency of it. While you jump and start to land back on the surface, that is the best time to execute an attack on the other player to give him a critical hit. This will not work while your player is going upwards but only when your player is coming downward. Master this awesome trick to damage your enemies a lot faster compared to the traditional clicking method.

Allow yourself as much time as you need to perfect one skill at a time. Do not overburden yourself with too many tasks; this will lead to failure. Also, keep in mind that you will be slaughtered by others. It will happen multiple times, in fact. Simply keep going and you will continue to improve.

Sons of the Forest Release Date and Everything We Know