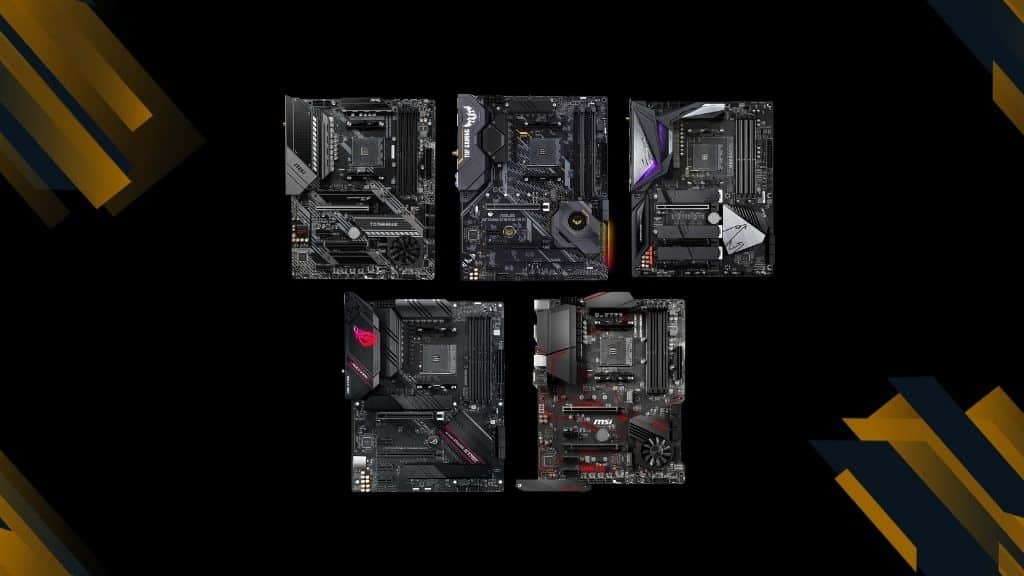 The AMD Ryzen 5 5600G APU offers excellent performance for the price. You will need to pair this 6-core 12-thread beast with the right motherboard that not only looks good but performs well too. In this article, I am going to go over the best motherboard for the Ryzen 5 5600G that you can buy right now.

When picking the best Ryzen 5 5600G motherboard, you have two main options. You can either go with the X570 chipset or the B550 chipset. The X570 is the top-of-the-line variant that comes with PCIe Gen4 chipset uplink and general-purpose lanes. The B550 motherboard is more consumer-oriented and supposedly budget-friendly. Both chipsets feature PCIe Gen4 for the graphics card and storage. Both chipsets also feature USB 3.1 Gen2, support overclocking, and dual graphics cards. Talking about the general design, the X570 motherboards come with a chipset fan while the B550 motherboards do not.

I have picked out both X570 and B550 motherboards so that there is an option for the general consumer and the enthusiast or prosumer. The following are some of the best motherboards that we can recommend for the Ryzen 5 5600G:

The X570 chipset is top of the line variant that you can buy on the AMD side of things and it comes with all the features, bells, and whistles that you could ever ask for. The MSI MAG X570 Tomahawk Wi-Fi is designed with power delivery in mind as it comes with a 60 power stage design with one of the best VRM configurations on an X570 motherboard.

The motherboard can deliver 720 Amps to the CPU socket for not only running the Ryzen 5 5600G but overclocking as well. It is safe to say that the motherboard can handle pretty much any processor that you throw at it even the high-end processors with 16 cores.

Both of the heatshields on the motherboard have a double thermal padded design that provides individual heat dissipation for the chokes and power stages. All this means that you get excellent heat dissipation and a very small heat footprint.

The motherboard has 2 M.2 slots that support PCIe Gen 4 for those high-speed data transfers. The M.2 slots come with heatsinks so that the SSDs do not heat up and thermal throttle. The motherboard does have a fan to cool the chipset. This is a bit of an eyesore but unfortunately, it is there to keep the chipset cool and it is a “feature” on all X570 motherboards.

The motherboard also features 6 SATA 3 ports for HDDs and 2.5-inch SSDs. The top PCIe Gen4 slot is reinforced for better GPU support. This is the only PCIe x16 slot, which you should use to install your graphics card in order to get the highest bandwidth possible. The second PCIe Gen4 lot is capped to 4 lanes which does not make it ideal for graphics cards.

The motherboard supports 6 fans and a water pump. There is an EZ Debug LED that will help you solve issues with your build in case something goes wrong. There is very minimal RGB on the board and all of it is limited to the side of the motherboard but there are 4 RGB connectors including 2 ARGB headers to sync the lighting of all your RGB components and peripherals.

The Asus TUF Gaming X570-Plus Wi-Fi is a very robust motherboard that features military-grade materials. It has a design to match that as well. It comes in Black with White and Orange accents. It features 8+4-pin CPU connectors to provide power to the CPU socket. That should give you a decent overclock on your AMD Ryzen 5 5600G.

The motherboard also has a TPM which Microsoft has mentioned is needed in order to run Windows 11. The top PCIe slot is reinforced for better GPU support. There are a pair of M.2 slots but only the bottom one comes with a heatsink. So you will need to get an additional one in order to use both of them without your SSDs thermal throttling.

There is minimal RGB on the motherboard itself but there are some RGB and ARGB connectors for lighting strips and other RGB compatible components. For video output, you have HDMI and DVI. The motherboard comes with Wi-Fi out of the box if you are interested in gaming without a LAN cable.

You get the chipset fan on the motherboard just like other X570 variants but Asus does a good job of hiding it and integrating it into the overall design. The TUF branding on the CMOS is also a nice touch which shows how much attention to detail has gone into designing the board.

The B550 chipset is supposed to be more budget-friendly as compared to X570 but pricing is all over the place right now and you might find that is not always the case. You still get support for PCIe Gen4 for your graphics card and high-speed storage which makes this platform great for the general consumer.

There is a backplate on the back of the motherboard which adds to the structural integrity. It also makes contact with the motherboard to dissipate heat. The motherboard comes with reinforced DIMM slots and PCIe slots. An interesting feature of this motherboard is that it comes with 3 M.2 slots while most feature 2. All of them come with heatsinks so you do not have to worry about getting separate ones.

8+4-pin power connectors provide power to the CPU which makes it great for overclocking. Unfortunately, there is no Flash BIOS button which would have been great keeping in mind how this is an excellent motherboard for overclocking.

Asus is known for making some killer gaming motherboards and the Asus ROG Strix B550-F Gaming Wi-Fi is no exception. I personally have the Intel variant and it is working fine without any issues.

8+4-pin power connectors provide power to the CPU which makes it great for overclocking. This is a major improvement compared to the previous model. The top PCIe slot is reinforced and supports PCIe Gen4. There are 2 M.2 slots and both come with heatsinks but only the top one supports PCIe Gen4. Also, note that if you use both of the M.2 slots then SATA ports 5 and 6 are disabled.

The motherboard comes with an integrated I/O shield for easy installation. You get Wi-Fi 6 out of the box and you even get the BIOS Flash button. There is also a dedicated USB slot that you can use to update the BIOS without having to install a CPU.

This happens to be one of the motherboards that we also recommended for the Ryzen 7 5700G but it can also easily handle the higher-end AMD CPUs as well.

The MSI MPG X570 Gaming Plus is a budget-friendly X570 motherboard that is not going to break the bank. It has 8+4-pin power connectors for the CPU which will give you a decent overclock. It has a classic Black design with Red accents.

The motherboard comes with a BIOS Flash button which is interested because you don’t get this feature on some more expensive motherboards. The top PCIe slot is reinforced and there is a pair of M.2 slots but you only get a single M.2 heatsink in the box so you will have to buy a separate one if you are interested in using more than one M.2 SSD.

All things considered, the MSI MPG X570 Gaming Plus performs similar to other X570 motherboards but the lower price makes it stand out. It does not come with Wi-Fi out of the box but if you are gaming then you are most likely using a LAN connection anyway. If you are looking for something basic then the MSI MPG X570 Gaming Plus is a motherboard that we can recommend for the Ryzen 5 5600G.

The Gigabyte B550I Aorus Pro AX is a small little motherboard but it does pack a punch. The design is very clean and there is an RGB strip on the right side of the board. The smaller footprint means that you are limited to 2 DIMM slots but you can get 16GB modules and install 32GB of RAM which should be ideal for pretty much anything that you need to do.

Both the DIMM slots and the PCIe slot are reinforced. The VRM setup is decent but there is only a single 8-pin power connector to provide juice to the CPU so the overclocking potential is going to be limited. Heat is one of the major issues in smaller PC builds so you should not push the overclock too high anyway.

With a bit of clever design, the M.2 drive sits below the heatsink that not only cools the M.2 SSD but the chipset as well. There is another M.2 slot on the back of the motherboard but it is not PCIe Gen4.

The Gigabyte B550I Aorus Pro AX does come with a backplate and even though this is a small motherboard you still get plenty of connectors for case fans and RGB lighting. The motherboard comes with 2x HDMI ports and a DisplayPort. You also get Wi-Fi and a BIOS flash button.

A major downside is that you only get 6 total USB ports one of which is USB Type-C. One of the USB ports allows you to update the BIOS without having to install a processor. This is the best motherboard for Ryzen 5 5600G that we recommend for smaller PC builds.

These are some of the best motherboards that we can recommend or the Ryzen 5 5600G. If you want a cool case for your build then you can check out our article on the 20 most unique cases that you need to see. 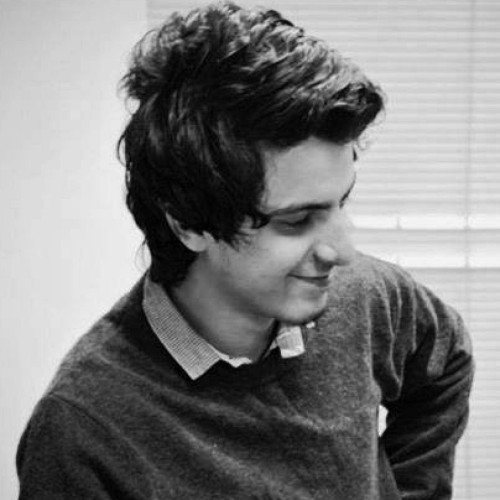 Talha Amjad
PC hardware enthusiast and avid gamer Talha Amjad has been creating content for more than 6 years now. He has worked with multiple brands and renowned websites. Tech and gaming are more than just work, they are a passion and way of life for him.