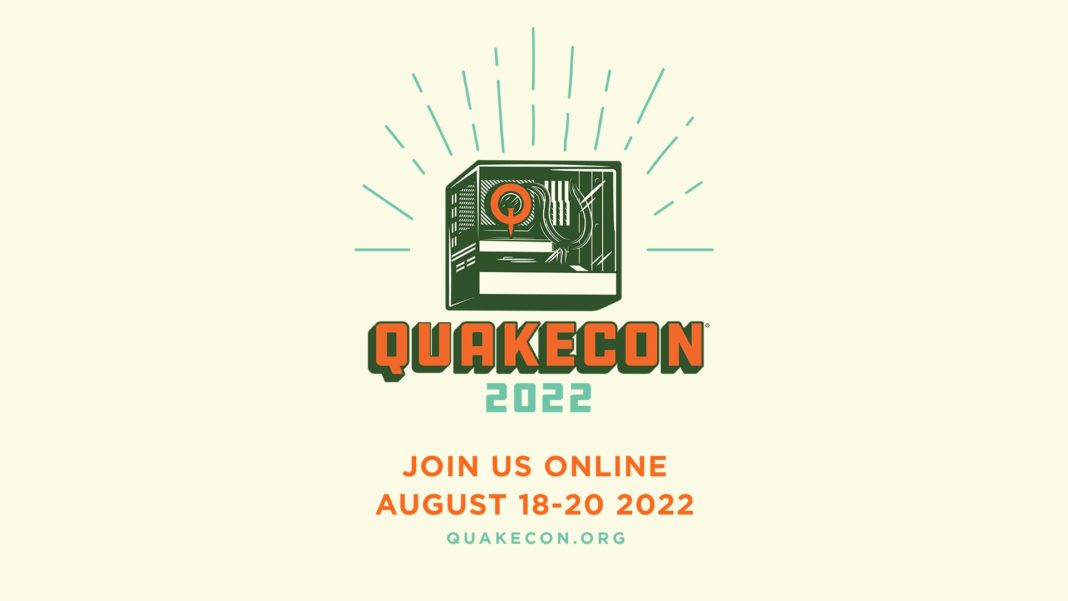 Bethesda and id Software typically hold QuakeCon as an in-person event in the month of August. It first started in 1996 and aimed to showcase new games, gameplay reveals, meet-ups, giveaways, charity events, the virtual BYOC, and much more.

Since the pandemic, the event has been held online. Though on the bright side it hasn’t been canceled like E3 has this year. Ever since Microsoft acquired Bethesda, we haven’t had an in-person QuakeCon event. But according to the publisher, we can expect an in-person show next year in 2023.

QuakeCon is set to take place as a virtual event from the 18th to the 20th of August. The live stream will kick off at 12:15 Eastern Time. A pre-show will be followed by the main event which will be commenced by Marty Stratton of id Software.

Bethesda has also revealed the entire schedule for the event which you can see here.

Like the last 2 years, you can watch the event from home, live, or as a recording later on. The best way to watch the live stream is to stream it officially on the Publishers’ Twitch. There might also be a stream on YouTube or there might be recorded highlights from the event to stream later.

Confirmed and Expected Game Reveals from the Event

QuakeCon 2022 like its previous iterations will primarily focus on online meetups and gameplay reveals. The schedule mainly focuses on announcing more information about Redfall, Ghostwire Tokyo, and Elder Scrolls Online.

The Redfall reveal will be highlighted in a 30-minute episode titled “Bringing Redfall to life with Arkane Austin,” in which Arkane Austin will take you inside their forthcoming squad-based vampire shooter with fresh insights, gameplay information, and more. So, new gameplay is expected which shows mechanics and other stuff about the game. it will begin at 1:15 PM and last 30 minutes.

Similarly, there is also going to be a stream that will focus on comparing Redfall to Deathloop labeled as ‘Deathloop and Redfall: the two souls of Arkane which will take place on the 2nd day.

Elder Scrolls Online is going to make a comeback at QuakeCon. There will be different live streams. Viewers will get rewards for streaming the live ESO presentation to help them in their endeavors at Tamriel. The Tamriel talk will begin at 1:45 PM and will last for 45 minutes.

There will also be various challenges entrusted to veteran ESO players which will take place in the form of charities. The reef challenge for charity will begin at 2:30 PM.

Fallout 76 will also be a point of focus for QuakeCon 2022. Developers will show how much the game has grown since it came out. Additionally, The Pitt from Fallout 3 is going to make a comeback and be showcased for Fallout 76. The showcase will start at 4:30 PM

Also, there have been rumors of a new Fallout game for years now especially, as it’s been a long time since Fallout 4 and the current reception of Fallout 76. There will also be a Fallout 4 charity stream that will begin at 5 PM.

Ghostwire: Tokyo is another game that is going to be presented at the QuakeCon 2022. There will be competitions also a stream where you will be able to explore the city of Tokyo in the game and take snapshots. The live streams will be held on the 2nd and 3rd days of QuakeCon.

Moreover, there is also going to be a stream that will discuss the lore of Doom. So, if you are a fan of the franchise this might be something that may raise your interest. Additionally, the schedule confirms that Starfield won’t be present at the QuakeCon, despite rumors that Bethesda might show more of their upcoming blockbuster at the event.

Other Activities at QuakeCon 2022

The Quake Champions World Championship will also take place at QuakeCon 2022 which too will be broadcasted live. There will be charity streams and you will be able to donate to multiple organizations through QuakeCon Tiltify Team.

Also, there will be quiz competitions, online meetups, and virtual BYOC. Another fan-favorite event will be the Dirt Keyboard Contest. People will show off their dirty keyboards and a winner will be given a new Corsair keyboard. We are really looking forward to the event and really hope it meets all our expectations.

What are your expectations of QuakeCon 2022? Which games are you expecting to be revealed? Let us know in the comments.