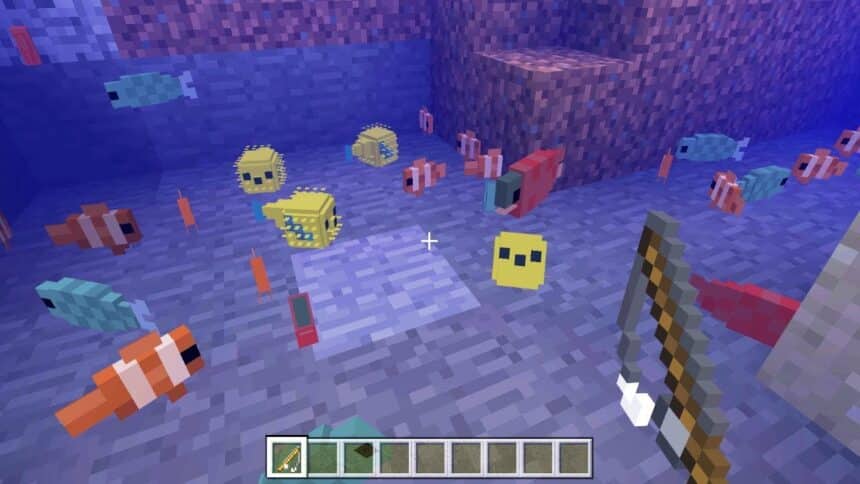 Whether it be a collector’s habit or a general tendency, Minecraft players love to go out of the conventional route to collect materials that are a nightmare to farm. However, even that is tame compared to attempting to breed tropical fish in Minecraft.

So, what makes these fish so unique, and why are they a nightmare to farm? We’ve taken a nosedive into the rabbit hole to surface everything you need to know about tropical fish in Minecraft!

Can You Breed Tropical Fish?

There’s no current method of actually ‘breeding’ tropical fish in Minecraft. The only way to obtain these mobs is by diving into the ocean’s depths.

Luckily, finding any of 2700 naturally occurring variants of Tropical Fish is a piece of cake, given that you know the method of identifying them.

How to Find Tropical Fish in Minecraft?

Tropical Fish tend to live in specified ‘zones’ that generate randomly wherever the following conditions (that vary between editions) are met:

In Minecraft Java, random varieties of Tropical Fish are generated in the following spots:

Tropical Fish usually spawn in groups of 8 in the Java Edition.

The following constraints / requirements restrict the fish spawning within the Java Edition:

In Minecraft Bedrock, random varieties of Tropical Fish are generated in the following spots:

Tropical Fish usually spawn in groups of 3-5 for the preset pattern and 1-3 for random patterns in the Java Edition.

The following constraints / requirements restrict the fish spawning within the Bedrock Edition:

How to Identify Tropical Fish in Minecraft?

Despite ultimately being nothing more than a source of nourishment, a Tropical Fish generally spawns from one of its 22 pre-set variants in both Java and Bedrock Editions.

While the specifics of the spawn will differ, the fish’s visual aesthetics are chosen randomly or from the pile of the 22 uniquely-named varieties.

The base variants of the Tropical Fish are as follows:

You will also encounter Tropical Fish reproduced using these 22 versions as the base template.

Here are a few discrepancies between the tropical fish from Bedrock Edition and the ones from the Java Edition:

In essence, Tropical Fish cannot be bred unless you’re using a modified version for it. They’re caught a bit unconventionally compared to regular fish and possess an exorbitant number of variants.

Let us know what you think about these spawn customizations in the comments section! In the meanwhile, check our ultimate list on the best Minecraft House Ideas.