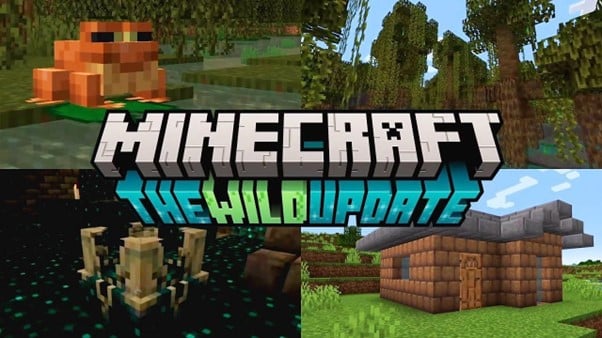 With just how old Minecraft is, you really end up thinking this game would have croaked by now.

Well, we’re glad to tell you that it finally did. Or uh, kinda. Minecraft’s latest mob might not croak but it definitely goes ribbit and jumps out of view to leave you guessing where it went.

Frogs are a passive mob that will be added to Minecraft in the upcoming 1.19 update labeled as “The Wild Update”. This makes them one of the three new mobs that this update brings to Minecraft.

Frogs fall into the same category as other animals in Minecraft given that they interact with their specific mobs and can be bred to make more of their kind.

They have the ability to jump approximately three blocks high – this brings them to the height of the player – and can take 10 hits of damage before their five heart health bar is depleted.

Frogs in Minecraft come in a total of three variants.

The first is the orange frog. This specific species is the most common and usually spawns in Mangrove Swamps (a new biome added specifically for them). They are also referred to as Temperate frogs, given that they spawn in moderate temperatures.

The second (and only other species in the overworld) variation is the Green frog. These are also known as Cold frogs and are usually found in snowy or icy biomes.

The third frog species is perhaps the most unique out there. It is off-white in color and only spawns in the Nether or very close to bedrock. Their natural habitat is usually in Nether forests or in deep underground caves.

The frog’s natural nemesis in-game is a slime. This also tends to be their favorite (only) food. Frogs found in swamps will usually attack smaller Slimes and will drop slimeballs when they eat them.

On the other hand, frogs in the Nether will treat Magma Cubes the same as their overworld counterparts treat Slimes. The key difference here is that when a frog eats a Magma Cube, it drops a froglight block.

This block has three variations and the drop depends on which kind of frog eats the Magma Cube.

What Do Frogs Drop?

Frogs, unlike other breedable mobs, do not drop any form of meat or edible item when killed. The only item they currently drop in-game is the froglight block which serves as a light source.

*As of the 1.19 update, froglight blocks are the only item frogs drop. They do not drop any edible meat or other items when killed.

What Do Frogs Eat In Minecraft?

Frogs (as weird as this is) really enjoy eating slimeballs. So, no matter the variation of frog, and no matter where it spawns, they will eat slimeballs and be attracted to you if you are holding them.

Where Can You Find Slimeballs?

As the name pretty much gives away, slimeballs come from slimes. Specifically, they come from killing small slimes. And given that slimes only spawn in swamp biomes at night, that is exactly where you will find them.

You can also find them already dropped on the ground in the swamp if a frog has attacked and eaten a small slime.

How To Breed Frogs In Minecraft

Frogs are bred the same way any other mob can be bred in Minecraft. All you need is two frogs and for them to be near a water source block.

Once these conditions are met, all you have to do is feed the frogs a slimeball each and put them into love mode (no jazzy tunes required). One of the frogs will then go to the water source and lay its frogspawn in the water.

Where Are Tadpoles In Minecraft?

Remember that frogspawn that the frog you just put into love mode just laid?

Cool. Go take a walk and then go have a look at where the frogspawn was. There should be tiny tadpoles in the water.

What? They’re still frogspawn? Take another walk. It should work now.

Can You Make A Tadpole Farm?

In true Minecraft fashion, whenever a new mob releases into the game, players always try to incorporate it into some kind of farm. But that doesn’t necessarily work with every mob.

Frogs, and sadly tadpoles too, fall into the category of mobs that cannot be farmed as of the 1.19-pre3 snapshot. Why? It’s simple really, frogs need to be fed slimeballs so that they can lay frog spawn and only the player is capable of feeding mobs in game.

When Are Frogs Releasing In Minecraft?

Frogs are technically already in Minecraft. But not for everyone.

Frogs, along with Allays and the Warden, will be added to Minecraft on June 7th with the 1.19 update. And even though Bedrock Edition players now have access to snapshot 1.19-pre3 (which adds frogs to the game), we’ll just wait for The Wild Update to release so everyone can see what frogs are really about.

Although if you’re on the Bedrock Edition, here’s a nifty guide to downloading the latest snapshots.