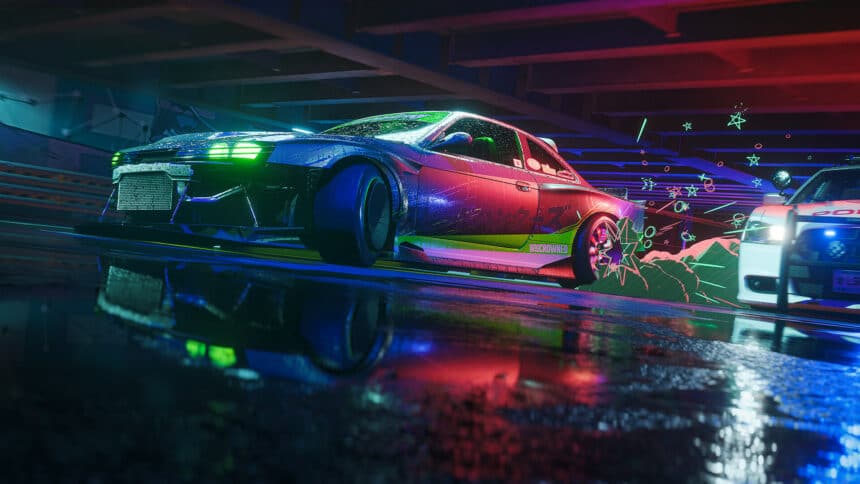 Need for Speed Unbound release date is coming, and it’s coming fast. The game was announced in October and is set to release in December. This is one of the fastest announcements to release time we’ve seen from a Need for Speed game.

Need for Speed is a long-running series that’s always trying something new. This time around, with Need for Speed Unbound, EA is taking the series back to its street racing roots. NFS Underground and Most Wanted 2005 are regarded as the best games in the series, and to see the beloved franchise return to the days of high-stakes races and Pink Slips is an exciting prospect for the fans.

Need for Speed Unbound release date is set on 2 December 2022. This was a quick announcement followed by a fast release in a couple of months’ time. This type of announcement and release schedule is usually done by Bethesda, and fans appreciate that.

A game that is announced close to completion without a long wait or extended marketing campaigns that border on being obnoxious isn’t generally liked.

If you are a fan of the series and want to get your hands on the game a little earlier, EA Play members will have a 10-hour trial of the game starting 29 November 2022.

How to Pre-Order Need for Speed Unbound: Palace Edition

In order to be a part of the pre-release, you will need to Pre-Order Need for Speed Unbound: Palace Edition from your relevant platform.

Regardless of the golden “never pre-order a game” rule, the released gameplay clip makes us think otherwise!

Need for Speed Unbound is only coming to next-gen consoles. It is releasing for PS5, Xbox One X/S, and PC. Players on older consoles are being left out of the release this time around. So if you were hoping to drive on the streets of Need for Speed Unbound with your PS4 or Xbox One, you’ll be out of luck.

We knew this would be happening, and after two years of next-generation console release, it finally is. There is no mention of a Need for Speed Unbound Nintendo Switch port or streaming solution either. We already have the PC system requirements for the new Need for Speed game.

Old-school gamers would remember Criterion Games as the developers of another epic racing series, Burnout. They made the crazy physics-based arcade racer back in the day and the last Burnout outing was with 2008’s Burnout Paradise. Many fans would love to have them back to making Burnout games but we get what we get.

There’s the Mountain Road, Kennedy Drive, that seems to wind down a mountain, perfect for long drift chains. The city can be seen in the background as well. It looks like a scenic route which we are sure would look equally well at night with the city lights in the distance.

The map also shows a quarry area, a car plant complete with a test track, a city pier, and a storm drain. We also see some safehouses that allow you to stash any won cash, fix your cars, and wait for the heat to die down.

Overall, the map seems fun, and the roads are curvy enough to provide smooth turns. We can’t wait to explore Lakeshore City.

Need for Speed Unbound release date will bring the same arcadey gameplay NFS fans love. Criterion is taking everything we love about the Need for Speed series and making it better, and more tailored to our personal tastes. The game allows you to drive a fast car in a beautiful city. However, this time around, your self-expression goes beyond the way you drive.

Customization is at the heart of the experience, and it shows right from the announcement trailer. The game allows you to customize your cars to the max and even outfit your character in clothes you like. That’s not all; you’ll be able to change the effects of your car however you desire.

The Grand is said to be the ultimate racing challenge in Lakeshore City. This is what you’ll be racing towards. You’ll be able to challenge rival racers and place side bets to gain even more money. There is risk associated with the bets, but the more you risk, the more bank you’ll make.

Need for Speed Unbound also has cops. We are hoping they are as aggressive as the cops in Need for Speed Heat; they start off mild but quickly ramp up their antics as you gain more heat. There are new escape mechanics in place here as well, with underground places to lay low and reduce the heat on you. Using new escape mechanics will net you even more cash bonuses, encouraging you to take on the cops.

Gain enough money to enter the Weekly Qualifiers and make your way to The Grand.

There is drifting in the game as well. No modern Need for Speed game is complete without it. Additionally, the easy controls are back, you can use the handbrake to initiate the drift, but that’s the old way. The new “one tap” brake or gas controls are also here. The control customization ensures you use the best drifting method that you love.

Grip turning is also available if you are not into going sideways. Combine that with a Nitrous burst, and you’ll be blasting off corners in no time.

There is a new Takeover mode that provides you with a nice cash injection or even a new car if you are bold and skillful. You’ll be alone on the track but will compete with other racers’ scores. The new events are all about style and mayhem. Go through turns by drifting, crash through barricades and barrels, and multiply your score by keeping the combo up. A$AP Rocky is in the game as a character, and his music is also featured in the soundtrack.

There are new gigs that can net you bank. From Car Delivery Jobs to Passenger Delivery ones. There are drift zones, speed traps, speed runs, jumps, challenges, and collectibles to keep you busy.

There is going to be multiplayer in Need for Speed Unbound. However, we don’t have a lot of details about the multiplayer aspect of the game yet. We are hoping we can still free roam the city with our friends and engage in unsavory activities frowned upon by the authorities. We will update the article as soon as Criterion Games releases new details.

You’ll have plenty of cars to play with in the single-player mode. We are hoping the whole list will seamlessly carry over to the multiplayer.

The new effects are called “Tags,” and they are activated when you use your boosting powers. Actions like drifting, near misses, and jumps allow you to charge your boosting powers and activate them in a visual explosion. The effects paint the surrounding world in your customizable art. This is certainly a unique take on street racing and one we are eager to see work.

That’s not all. If you don’t like the Tag effects, you can turn them completely off. This is a welcome addition for those who just want to have a pure NFS racing experience. We’ll reserve judgments when we actually get to play the game ourselves. The Need for Speed Unbound release date is approaching soon, and we can’t wait to see how you paint the world.

Taking inspiration from street art and other media, we creatively subvert the characters and visual effects, turning them into expressionistic illustrations of ‘you’ and ‘your actions.’ It’s literally ‘graffiti-coming-to-life.’

The graphics overall look great, and the city seems to be designed beautifully. The art design is what makes Need for Speed 2022 stand out from the rest of the racing games in the series. The comic book-style cel-shaded characters and effects are interesting to look at.

The team is aiming for 4K 60 FPS action on consoles, which is certainly a welcome change from what other games are doing. We’ll report back once we actually see the game running on consoles.

There are only two editions of the new Need for Speed game. The Standard and the Palace editions. There are pre-order bonuses attached to both editions as well.

There have been quite a few short trailers for the new Need for Speed game. Here are a few of them.

The reveal trailer for Need for Speed 2022 has some gameplay mixed in with cars and characters. The trailer also features a real-world artist, A$AP Rocky, as well. The trailer shows off races, the story, the setting, and customization.

Then we got a trailer that showed off the police chases in the new Need for Speed game.

The Takeover Event gameplay trailer has the new mode in full display. It also shows off some of the effects you’ll be able to apply to your vehicle in the game.

The new Need for Speed is just around the corner and from what we’ve seen it’s shaping up to be a good one. Of course, we’ll also need to see how much post-release support this game gets, EA unceremoniously dropped support for the last Need for Speed game, Heat. The last game had a thriving community eagerly awaiting more content only to be left dry.