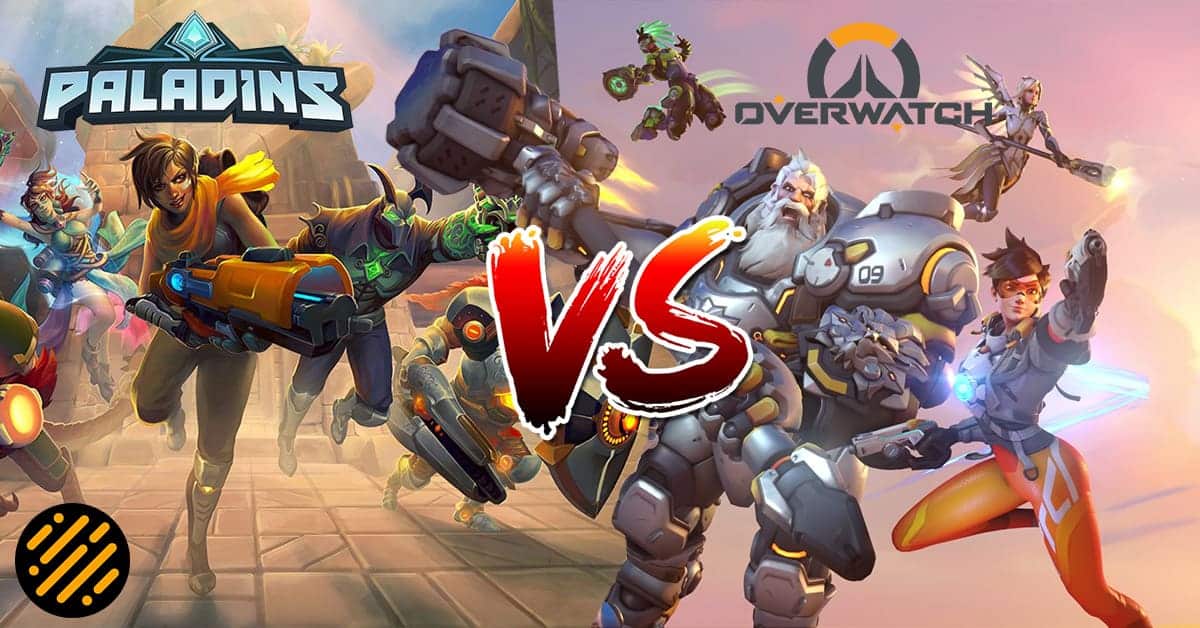 Overwatch VS Paladins is a hot debate. Which one is better? This is our Million-dollar question. In this article, we will try our best to give an answer to this hotly debated question.

Both the games are stacked against each other quite often because of their similarities. However, despite being so similar, both games have their own unique features that set them apart from each other.

Moreover, there have always been speculations that Paladins is just a copy of Overwatch. Are they true? Well, not so. Sharing similarities with another game does not necessarily imply that it is copied.

Now, without further ado, we will pitch the games against each other and see which one comes on top. This is Overwatch VS Paladins; Let’s get started.

Both the games share quite a similar-looking gameplay, but if you look a little deeper, you will see that each one has its own distinct features despite looking so similar.

Overwatch starts with the player having to choose from a list of 32 characters categorized into 3 roles. The player then participates in assault, hybrid, capture the flag, or any of the other game modes. The game takes place on earth at some point in the future. So, despite being a heavily stylized game, you will find some touch to reality.

Coming to Paladins, players team up in a 5 v 5 team battle. There are 46 champions divided into 4 roles. The player needs to select their character from the list and then take part in any of three game modes: Siege, Onslaught, and the traditional Team Deathmatch.

Both the games allow for a custom game mode where the players can set their own rules, draw their own limitations, and square off in their own custom-created challenge.

Once you are in the game, Overwatch allows the player to change character mid-game depending on the requirements. Paladins, on the other hand, does not allow any such change, and you are stuck with the selected character for the entire match.

While the character switch in Overwatch is much exciting and adds adventure to the gameplay, Paladins, in this aspect, is closer to reality. If we are real for a moment, you can’t change your soldiers mid-war. This forces the player to think and choose their character wisely.

Spawn rooms in Overwatch are much more fun and dynamic. A lot is going on; you can inspect the variety of arcade machines or go on to destroy each of them and create chaos. On the other hand, Paladins’ spawn rooms are quite basic, and there is nothing much to do than to just sit and wait for the game to start.

While talking of the spawn rooms, there is one thing that Paladins has, but Overwatch lacks; Horses (called Mounts in the game). The Mount acts as a speed booster. Every time the character respawns, they can ride a Mount to get to the action more quickly as compared to Overwatch where you have to walk all the way to join the battle.

Characters, called Heroes, in Overwatch are colorful, easily recognizable, and much more diverse. Since the games take place on earth, most of the characters are humans across various cultures. Other than human characters, there are a few robots and a Sci-fi Gorilla.

Contrarily, Paladins’ characters, called Champions, are more basic though a bit stylized. The game takes place in a fantasy world, so you will find a lot of fantasy characters like a goblin, dragon, a walking tree, and even a living bomb.

Overwatch’s Heroes have a human touch to them with background stories that you will be able to relate to. Paladins’ Champions, on the other hand, are fun and adventure to play, but there is nothing much besides this that you could relate to.

In Overwatch, characters are categorized into three roles; Support, Damage, and Tank, whereas Paladins’ characters have four roles; Damage, Front line, Flanker, and Support. Moreover, the player can also train a specific Hero or a Champion to enhance their skills.

All the Heroes in Overwatch are ready to play once you have bought the game. Opposite to that, Most of the Paladins’ Champions are hidden behind a lock screen. Out of 46, only six characters ready to play, while four more can be accessed from a rotating free Champion schedule.

Both the games offer cool unlocks/loots as you level up or perform specified tasks. Both the games allow the player to buy the loot boxes as well. The games often tease the player with cool upgrades they can access after buying their chests or cards.

Loot boxes in Overwatch contain cosmetics that the player can use to customize their character to make them look cool and enter the battle in style. You can also buy the chests, but if not, you won’t be missing out on anything important.

While Overwatch’s chests are mere cosmetic, Paladins’ reward system contains dangerous upgrades that may affect the gameplay.  The game also has a card system. Each champ has a set of cards that improves skills, health, reduces cooldowns, and much more.

The player can select 5 cards before each match. The cards have a rarity system along with a rank limit. The game teases an extra card during the unlocks to get the player to buy the card to earn powerful upgrades.

However, there is a downside to the card system. It favors those who can buy cards and grow stronger compared to those who can’t afford it. The player also depends on luck to get useful upgrades and rare cards as well.

Overwatch’s graphics are more lively, dynamic, and vibrant. There are multiple items you can interact with. Despite having cartoonish graphics, the game has a semi-realistic touch to it.

The game takes place in different countries across the world at different times of the day. Maps are colorful and filled with items like lanterns swaying in the wind, and railings that can break, etc.

Paladins also is a highly stylized game. The world is all colorful and fun to play in. The game is designed in such a way that surroundings remain stationary even after being hit by time bombs and hyper-beams, etc. This makes the game accessible even on low-end systems.

Remembering that Paladins is a free-to-play game, the graphics feel pretty decent though not comparable to Overwatch. In terms of graphics, Overwatch is the better game, whereas Paladins is targeted to run on almost all systems.

Overwatch VS Paladins is a highly anticipated battle. Both the First-person shooter games offer a fun and adventurous multiplayer experience. Which game is better? Well, depends a lot on the person holding the controller.

Overwatch appears to be an overall better game. The dynamic graphics of the game, locations, all ready to play heroes, and its large community tilt the decision in favor of the game. The distinct feature of character switching mid-game adds to the excitement in the game.

With that said, Paladins is targeted towards a bigger audience. The game features a highly stylized world and a large pool of characters despite being a free-to-play game. The game has its distinct features in the form of Mounts and a unique card system.

Again, which game is better is a subjective question as different people have different preferences. Some might like Overwatch, while some may prefer Paladins. Let us know in the comments which game is your favorite and why?