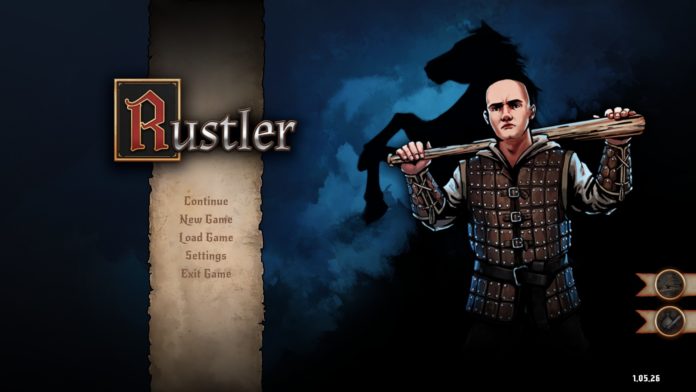 In this Rustler Review, we will be taking an in-depth look at how an indie game developer takes inspiration from Rockstar Games. Its strong points as well as its flaws. Hopefully, this Rustler review will also help you decide whether this game is for you.

Developed by Jutsu Games, Rustler is an indie top-down action game. Rustler tries to capture the nostalgia from the old Grand Theft Auto Games. Not to confuse you, but this isn’t the Grand Theft Auto Trilogy Remake type, but we mean GTA 1 and 2 style of games.

Speaking of Grand Theft Auto Trilogy, if you’re playing the trilogy on PC, make sure to install these mods to have a better playing experience; No Outlines and Rain Fix Mod.

Upon booting up Rustler, a live-action cutscene plays as a prologue to the game. Further reinforcing the cutscene, starting a new game lets you continue as you wake up as Guy. Guy is a rustler, meaning he steals and does dirty deeds for people in exchange for money. Such as the title’s meaning, you would be doing missions from different NPCs as you try to progress through the story.

After doing the first main mission, we are finally dropped into the game, free to do whatever we want.

Once you drop into the beautiful world of Rustler, you’ll find yourself amazed at the jaw-dropping aesthetic that this game has. While there are far better-looking games out there, you can still appreciate the time and effort that the developers put in for the game to look this good.

You can feel the medieval vibe once you step foot into the game. It has its own take on the day and night cycle, which is a nice touch to the game even though that is a standard feature nowadays.

The world feels alive with people doing their usual day-to-day chores, unlike other triple-A games I know; I’m looking at you, Cyberpunk 2077.

Overall, the setting is excellent, and it is one of the best features of the game, at least for me.

The funniest scene for me was the one where you end up punching a tough-looking guy to build your reputation on the block. The guy funnily touted as Cheerful Billy was revealed to be the sweetest guy on the block. Eventually, many people try to mug Guy for what he has done to Cheerful Billy.

Throughout any open-world adventure game, you will always feel a sense of boredom during exploration; it is inevitable. How do video game developers resolve that problem? Of course, through music!

Rustler’s best aspect is its soundtrack, ranging from string arrangements that suit the great medieval era vibe that the game has to even bards with the ability to incorporate beatbox into the mix! I have never known that beatboxing was a thing in the medieval era; then again, this is a parody of the medieval period.

Nonetheless, it is a great way to spice up your adventures through the tedious cities and landscape of Rustler.

Rustler’s various control styles it offers to its players is a very well-appreciated feature. It has two control layouts on-foot and three control styles on the horse. These different control styles provide flexibility whether you’re using a mouse and keyboard or a controller.

As for me, I just stuck with what the developers recommended as an option.

Let’s face it, developer support shows how much the developers care for their product, and Jutsu Games does not disappoint here. With the latest patch for the game coming out as recent as January 27, 2022, it shows that even though the indie game has been out for a couple of months, the developers knew that there are still some areas for improvement, which I wholeheartedly adore.

These types of bug fixes are much appreciated and give a distinct feature of the developer that they care for their customers.

One of the worst features of this game is its mission checkpoints. Seriously, there are some missions in Rustler that are hard and tedious to do. If you fail, you’ll have to restart from the checkpoint, and then the game slaps you in the face for being a dumb-dumb and places you at the very beginning of the mission.

It isn’t very pleasant to deal with, especially most of the missions are fetch quests—more on that in the following part.

Most of the missions in Rustler are pretty generic. Go here, fetch this, kill the attackers. It goes on and on for a couple of missions that I have played. It’s not as in-depth as I would like it to be. I’d go as far as saying that Jutsu Games poorly executed most of the game’s mission design.

An example of this is one of the first missions you’ll be playing named No Horse Zone. In this mission, you’ll be stealing a horse, and a bunch of guards will be attacking you once you enter the off-limits zone, then you’re expected to deliver it to the quest giver.

While this is fine, the repetition of these quests, the difficulty of the police chases, and the horrible checkpoints during missions add to the tediousness. It overall reduces the experience of the game for me.

The worst feature I’ve struggled with getting into Rustler is its annoying responsiveness to my control inputs. I’m mainly using a mouse and a keyboard to play, so we’re in the same context. Rustler adapts tank controls, you use the A and D keys to pivot your character, and you’ll use W and S to move forward and background.

It takes time getting used to, but when hordes of police are chasing you, you’re in for a bad time. Also, a bug is present when trying to mount a horse in a narrow area. Guy will just run around the horse, tries to mount it, fails, Guy then eventually runs to the other side, and this goes on an infinite loop.

Lastly, the zoomed-in minimap does not help you a lot while you’re in-game. You’d most likely be opening the map frequently to see where you’re at in the world. Unlike recent releases of Grand Theft Auto, the map does not give you a GPS-type of system where it tries to guide you directly through the roads towards your destination.

The game has that weird arrow (attached to your character) pointing to where the objective is relative to your location.

The policy system in Rustler is precisely the opposite of Cyberpunk 2077’s joke of an AI Police System. In Rustler, whenever you execute a crime, whether scripted in the mission or not, the police will always respond as if a terrorist attack is underway.

In this instance, I just started a new game and accidentally ran over a pedestrian without even a police witnessing a crime; suddenly, a police in a horse chased me and attacked me relentlessly. I understand that it works like this in Grand Theft Auto, but the police’ horses are much faster than your horse.

Grand Theft Auto perfectly balances your wanted level with the level of intensity of the chase and the number of police they have on you. I would like to see an improvement in this system on Rustler.

Rustler has a weird implementation of the background music coming in bards. Since bards are stationary, although you can recruit them with a cost of gold, sometimes when you transition into areas with no bards available, the background music will fade, and then an awkward silence of chirping crickets in the night greets you through your adventure.

During my playthrough, I had a fast enough horse to get from one bard to another that it introduces a bug that the second bard’s music is playing over the first bard’s music. Although this bug is not game-breaking by any means, it ruins the immersion for me.

Rustler advertises itself as a parody of Grand Theft Auto with its subtitle as Grand Theft Horse. It does quite an excellent job of giving players that nostalgic vibe through its top-down style action-adventure game like the old Grand Theft Auto games. The world is gorgeous, and the music it comes along with to accompany you with your adventure.

As for our final thoughts on this Rustler Review, though most of the content in this article contains a lot of criticism, we have to keep in mind that this is just an indie game, and the developers are trying their hardest to fix the bugs. There are nuances between Triple-A game developers and indie game developers.

These nuances come in the form of the budget and the size of the development team. We have to appreciate the amount of effort it takes to produce a game. I also believe that a few patches can fix most of the criticisms I’ve had for this game.

Let’s take a different approach and look at Rustler as an indie game. Jutsu Games did an excellent job delivering a product that sets out to be a Grand Theft Auto Parody for an indie game. Would I recommend it to you as a consumer? Absolutely, this is a gem of a game and is lots of fun to play if you’re trying to pass the time.

Rustler isn’t a bad buy of a game by any means, but it certainly has its flaws. If you’re willing to overlook those flaws and you’re just trying to find a game that gives you a humorous and nostalgic experience, then consider checking Rustler.

Now that you have my take on an Indie Game, consider checking out some of the free indie games you can play right now!

This review is based on the PC version of Rustler. The key was provided by MODUS GAMES.

Gigabash Review – A Kaiju Brawler On A Rampage

Load more
Rustler Review: Old School GTA Indie GameRustler (Grand Theft Horse) is an indie game set in the medieval era. The game aims to be a parody of the old-school top-down Grand Theft Auto games. Get ready to steal some horse and "accidentally" run over people.
Tech