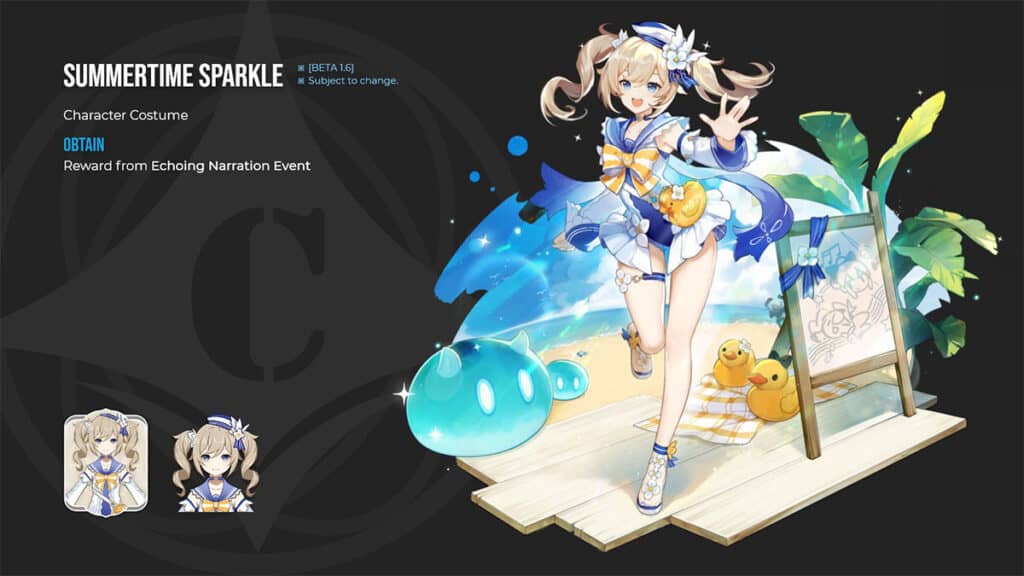 According to a new leak, a brand new skin system is coming to Genshin Impact Version 1.6. Jean and Barbara will be the first characters to receive new these new skins. Once the new skins for Jean and Barbara roll out, new summer-themed costumes for other characters will follow soon afterwards.

There are no words on whether the new skin system will be totally free or not. So far, we know that Barabara’s skin will be free and unlocked by completing in-game events. However, there’s no word on obtaining Jean’s new skin. Fans suspect that it will be paid, hinting at a mix of free and paid skins for other characters in the game.

Barabara’s new skin is called the “Summertime Sparkle” and resonates with the theme of summer. While the overall dress is not much different from her original dress, the lighter tone of blues suggests a summer theme. It’s also complemented by hints of yellow in her bow and a rubber ducky.

Barabara’s “Summertime Sparkle” can be unlocked after completing the “Echoing Narration Event”, probably a part of the upcoming version 1.6.

Jean’s new skin is called the “Sea Breeze Dandelion” and reflects a beachy theme. Jean’s summer skin is actually pretty different from her original skin. As compared to her official and unyielding white dress, the Sea Breeze Dandelion replaces that with a loose and laid-back summer dress.

Furthermore, Klee’s mother Alice is rumoured to have a role in the upcoming V1.6. Leaked voice lines hint that she will be the one to introduce the upcoming skin system. Perhaps Alice will set up a shop where the players can go in and buy or trade skins for their favourite characters.