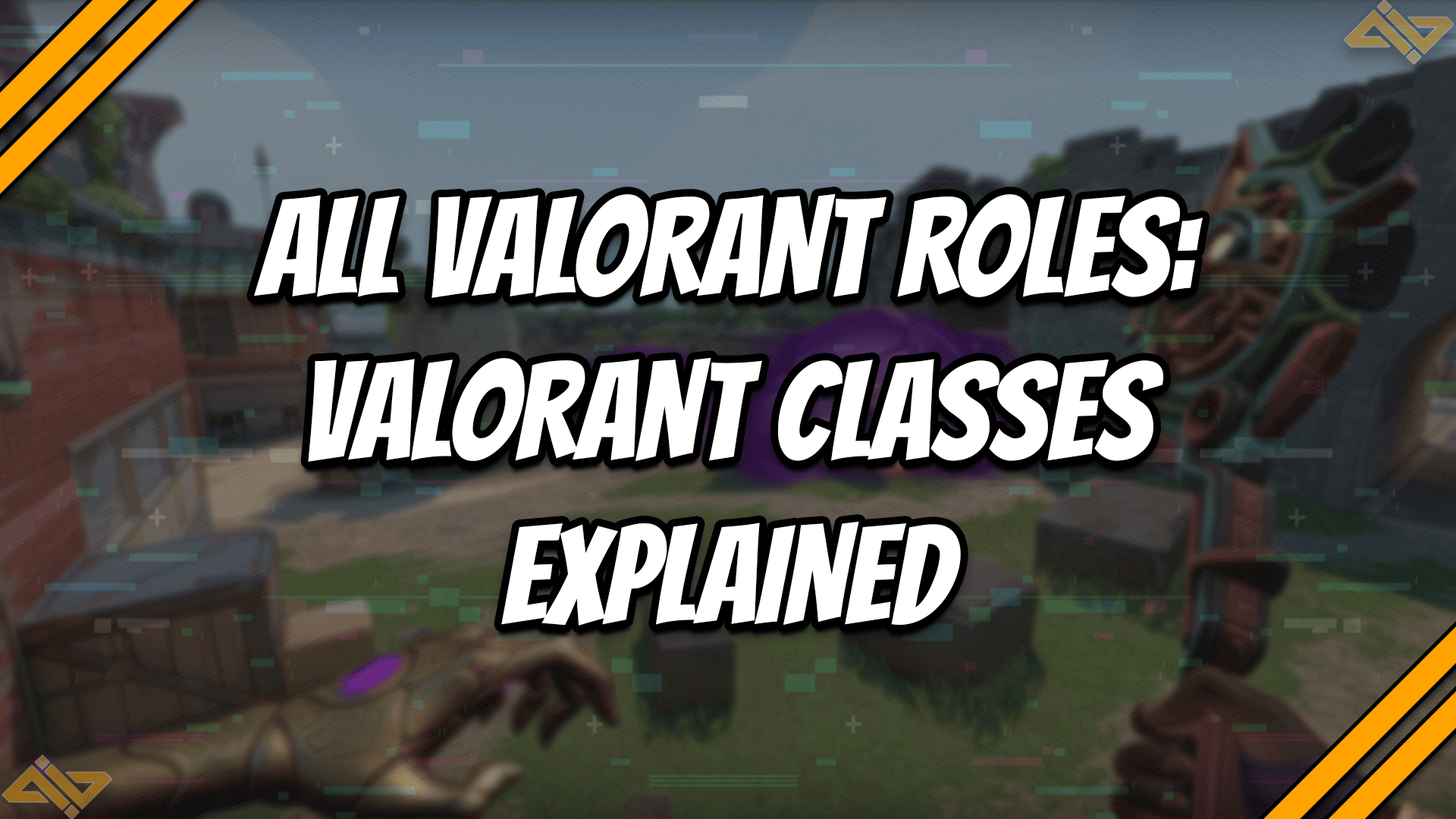 Don’t know what each class in Valorant does? I’ve got you covered. Here are all the different Valorant roles explained.

Valorant is a 5v5 tactical shooter game where there are different agents with special abilities. Most people describe it as CS:GO meets Overwatch. Riot describes it as a game where precise gunplay meets unique skill-based gameplay. I personally feel like both of these are accurate descriptions of Valorant.

Like most games with characters who have abilities, Valorant follows a “class” system. Each agent in Valorant is assigned a role that they fulfill within the game. These are based on their skills and how they influence the match.

The Valorant roles are a great way to find the best agent for your preferred playstyle. Each agent’s kits were built around their classes and help them fulfill specific roles within the team. For example, Fade has abilities that help her gather information and set up her team for kills. This makes her a perfect Initiator agent. Learn more about her in our Fade Valorant agent guide.

Today, I’ll be explaining all Valorant roles and what they excel at doing. I’ll also list all the agents for each role and include the specialized positions within a Valorant team.

There are four main roles in Valorant. All Valorant agents are either Duelists, Initiators, Sentinels, or Controllers. These roles will dictate your primary contribution to the team and will even affect your overall general play style.

The different Valorant roles can definitely be quite confusing at first. But that’s why I’m here to help. Here are the different classes in Valorant and the specific roles and play styles they fulfill in a team.

First up, we have the Duelists. Duelists are designed to be the primary offensive agents in the game. This means that your kit is centered around dealing damage to the enemy team, getting kills, and being able to set yourself up.

Oftentimes, Duelists are the hard carries in a team. They are expected to rack up the kills and take heads left and right. They are usually “lone wolves” because of how self-sufficient they can be. Most Duelists will have a flash, a stun, or a repositioning ability built into their kits to help them be more aggressive.

Good Duelists also know when to ask for help. Maximize your effectiveness by asking for assistance when clearing corners and checking areas. Valorant is a team game afterall.

As a Duelist, your primary job is to make space for your team. You can do this by being proactive, clearing and checking corners, and getting kills. You are the first player to enter a site and are expected to get first bloods and lead your team safely.

Duelists can also determine the pace and flow of the match. They can play very aggressively and take fights whenever they can to create a fast and thrilling pace. They can also be very meticulous and check every corner for a slower and more calculated approach.

Usually, players with excellent aim, great movement, and good game sense make for a fantastic Duelist player. A good Duelist can easily dominate a game. However, they also know when to be aggressive and when to pull back a little.

There are currently six Duelists in Valorant. They are Reyna, Jett, Phoenix, Neon, Yoru, and Raze. If you’re looking to become a Duelist, make sure to constantly train your aim because you’ll end up in a lot of fights.

The next Valorant role is Initiators. Initiators are excellent at gathering information and shine by setting their team up for success. They are designed to be more supportive players and help the Duelists create space.

Your main job as an Initiator is to gather information about the enemies’ positions and create opportunities for your team. They can disrupt enemy movement and force them to reposition by exposing their location or brute forcing them to move using their abilities.

Playing against good Initiators can be annoying. You’ll feel like they are using wall hacks because they always know where you are and use the right abilities at the right time.

Most Initiators have flashes, damaging abilities, or concusses to force enemies out of hiding. They also have information-gathering skills like recon scans, controllable tech or pets, and other abilities they can use to reveal an enemy’s position.

As an Initiator, most of your skills can be used from a safe distance, and you aren’t required to push aggressively. However, some Initiators can also act as secondary fraggers who follow the Duelists into the site, set them up for some kills, or trade them when necessary.

The five Initiators in the game are Sova, Breach, Skye, KAY/O, and Fade. They all have unique and interesting abilities that can be helpful in almost any Valorant map you end up playing on. Make sure to practice your lineups to surprise your enemies with your skills.

The Sentinels are an interesting bunch of agents. This is a defense-focused role, and are fantastic site holders and flank catchers. Having a great Sentinel player on your team can make playing the Defenders’ side so much easier.

Sentinels are expected to slow down enemy pushes on the Defenders’ side. They excel at locking down certain areas of the map, stalling, and delaying enemies for as long as they can. Sometimes Sentinels can even straight-up stop aggressive pushes or rushes using their utility and force the enemies to rotate or end up being dead.

These agents usually have traps or walls to help delay the enemy team. They can also have slows or damaging abilities to prevent enemies from rushing in without chunking down their health bars. Sentinels are the ultimate defensive anchors and can even cosplay as Gandalf from The Lord of the Rings, screaming “You shall not pass!” to the enemy team.

It can definitely be boring to play as a Sentinel because of how far back you have to play at times. It’s not a Valorant role for everyone because players will often avoid you as much as they can, leaving you with little to no fights for a majority of the match. Patience is the key when it comes to playing as a Sentinel.

Going against excellent Sentinel players can be extra annoying because it feels impossible to push the sites that they are holding. They even make flanking incredibly difficult because of the abilities they have watching their backs.

The Sentinels in Valorant are Sage, Cypher, Killjoy, and Chamber. They also usually end up with a low number of kills and impact the game through other means.

The final Valorant role is none other than the Controllers. From the name itself, you can probably already guess that Controllers are great at controlling the map through the use of their smokes and vision-blocking abilities.

A Controller’s main responsibility is to cover up critical areas of the map and block off enemy sightlines. This helps the team safely enter the site without worrying about clearing long-range angles and sightlines.

Like Sentinels, a Controller’s efforts often go unnoticed. Because they usually have a low number of kills, most people often think that they are useless. When in reality, Controllers are actually the team’s MVPs and would make your life very difficult if they weren’t around.

As a Controller, you need to learn about the sightlines of each map and be familiar with all of the areas. You must know when and where to smoke for your team. You’re going to be useless if you don’t know the proper areas to block off with your abilities. If you’re having trouble on Ascent, check out our Valorant Ascent map guide to help you find the best places to smoke.

Unfortunately, there are only a few Controllers to choose from. The four Controller agents in the game are Brimstone, Omen, Viper, and Astra. Luckily, Riot is looking to add a new Controller to Valorant.

The Ideal Number of Roles in a Valorant Team

For the most part, the number of agents for each role in your team will depend on the map you are playing on. If it’s a wider map, having two Controllers or two Sentinels will help a lot.

However, in standard competitive play, most team comps usually end up having double Duelists or double Initiators. This is because you are playing with random people, and you can’t control what role they want to play. I’ve even been in a lobby filled with Duelists and only one Smoker.

But, more variety in team compositions can be formed in a more team-based environment like professional play or in a pre-made lobby. Some teams like running double Initiator or double Controller instead of having two Duelists. Others with a more defensive mindset prefer double Sentinels instead.

Ideally, you’ll want to get at least one agent from each role within a team, but sometimes crazy team compositions can still work. The possibilities are endless, and it all boils down to your team’s strategies.

The Best Valorant Roles for You According to Your Playstyle

There are 19 total agents divided into the four Valorant roles. Finding the right role and agents for you can be difficult, especially when first starting the game. But don’t worry. It’s actually quite easy to find the perfect Valorant class once you know what to look for.

Generally, you can choose the role and agents that you’d like to play based on your playstyle. Each role has a few distinct factors that can help you decide.

If you’re an aggressive player who wants to get into site first and rack up the kills, then the Duelist role will be a great fit. It’s great for players who prefer a head-first playstyle complete with flashy plays and being the hard carry. Make sure that you don’t bait your teammates just so you can rack up those kills.

If you like calling the shots and telling your team the best thing to do, then a Controller or Initiator is your best role. Typically, you can play the Controller role well if you have great timing and like being one of the last persons entering the site. However, for a more semi-aggressive playstyle, you can also choose to play as an Initiator.

It isn’t all about carrying and calling the shots. Supports deserve some love too. If you’re the type to stay behind and do everything you can to help the team win, you should try playing Initiators or Sentinels. You set up your team for success, stay back to watch flanks, or even heal them up when necessary. It’s all about doing the small things that most people don’t like doing.

This was everything you need to know about all Valorant roles and how to choose the perfect class for your playstyle. At the end of the day, Valorant is a team game; all the roles rely on each other to succeed. If you can play your chosen role properly, winning more games will be much easier.

What’s your favorite role in Valorant? Make sure to comment it down below.