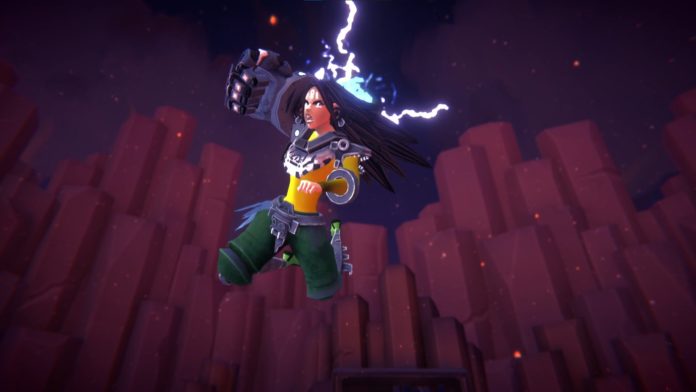 Aztech Forgotten Gods is a third-person action-adventure game from Lienzo. It follows the story of Achtli as she tries to unravel the secrets of the ‘Forgotten Gods’ who are set to take over the modern world. Together with her weapon, Lightkeeper, she takes on monsters and bosses to uncover the truth.

Aztech Forgotten Gods starts off simple with an introduction of Achtli – a young Aztec with a mechanical right arm.

Acthli runs into her mother, Nantsin, inside an unsanctioned dig site. Her mother’s goal is to help the world by searching for ancient knowledge that produces immense power.

However, they cause an explosion and wake up colossal deities who are set to destroy the modern world. The explosion causes Achtli to receive an ancient artifact – the Lightkeeper.

The Lightkeeper is a gigantic gauntlet that replaces Achtli’s mechanical arm. It gathers energy to build thrust, which in turn, is used to move across the map and fight monsters.
But alongside Lightkeeper, Achtli’s mind gets Tez, a supposedly Aztec god, who wields the power of Lightkeeper during ancient times. Tez will guide Achtli on what she should do as the story progresses.

Like other action-adventure stories involving digging up artifacts like the original Jurassic Park. There will always be elements of an inside job, which I find interesting here because it adds more depth to the story. It gives it a little twist compared to just linear storytelling.

The main story itself is pretty straightforward and I do not want to spoil it further. Now, there are available side quests too if you want to take a break from all the giant slaying.

There is a quick introduction and a tutorial once you first get into the game. It shows you the movement and controls and how you can control Lightkeeper through Zuma – the previous owner of the Lightkeeper.

Once inside the main story, you will have to navigate the city, either by foot or through Lightkeeper, to move from one goal to another. You will get an energy meter though and spamming Lightkeeper drains that easily.

There are available boosters while flying scattered throughout the city. You may pass through these ‘portals’ to gain a speed boost and quickly move from one place to another.

Moving on to the combat mechanics, you will have to prepare your mouse or your controller as the game relies on mashing buttons during fights. There is a charge attack though that deals heavier damage. But for quick punches, smash your mouse as much as you want.

Once you are in a boss fight, you will need to think quickly about how to defeat the boss by finding its weak spot. This is one of the most challenging aspects of the game as there is no clue on how to defeat bosses besides some hints from Tez at the start. Other than what he said, you will have to rely on yourself in finding the Forgotten God’s weak spot.

Now, I’m not particularly a fan of this battle style. It is too plain especially when a circle guide pops out and you immediately dash forward to attack the enemy upon clicking a button. I prefer to have more fighting options such as chain combos – something similar to The Legend of Zelda: Breath of the Wild.

This does not mean that the fighting gameplay is bad because, as I’ve mentioned earlier, finding the weak spot is like solving a puzzle and I guess, having a simple way of battling is kind of a reward to finally solving the puzzle.

Despite having a simple battle mechanic, defeating bosses are still challenging. You will have to time your attacks and do it in a timed fashion as you may have a small opening to deal damage.

There are three major recurring enemies around the city. Soldiers use energy cannons but are fairly easy to beat. Tanks are larger and tougher and like bosses, you will need to find their weak spot. Lastly, Mages are long-range fighters and support Soldiers and Tanks in a fight.

There is an upgrade system to further increase your power and skill. You may choose your upgrades in the Central Workshop. It is up to you to choose which skills you need to defeat the Forgotten Gods.

Upgrading your skills requires you to spend some coins, which you may obtain by defeating monsters.

There is very little customization available in-game but it is better than nothing. You will gain access to hair and outfit customization further in the game. The designs are cool but don’t expect much as I can count on my fingers the number of available designs.

The only problem I have is the game’s pacing. I understand that it is story-driven, but as you progress through the story, it felt boring. Lots of talking between the characters and the action come in once you figure out the boss’ puzzle.

If you are a fan of action all throughout the game then this might not be the game for you. For every 10-15minutes of talking comes in the boss fight – which takes several minutes of figuring out before the actual fight happens.

There are monsters around the map but then again, it is not enough to satisfy my hunger for action.

I tested Aztech Forgotten Gods on a PC using both a controller and a mouse-and-keyboard (MnK). Both of which are great options but I prefer using a controller for this game.

The control feels better with a controller due to the way the battle system works. Pressing the buttons repeatedly felt more satisfying compared to just pressing my mouse.

The battle assist system, where a circle pops out and guides your attack, makes the controller use better too because you do not have to be precise in targeting your enemy.

This might be cherry-picking already but the sensitivity is too high when using MnK. I already set the in-game sensitivity to the lowest yet the view moves around quickly.

It only settled down once I adjusted my DPI to the lowest, which is 400. Now, this is a problem for players who has a fixed DPI or if their lowest DPI is at 800. But if you are used to high sensitivity gaming, then it might work well for you.

Another issue with the high sensitivity is the camera. It goes all over the place. Sometimes I cannot even see my character as it switches from one direction to another.

The tutorial is also not enough to discuss how flying works. Changing altitude is a bummer and you have to figure it out on your own. I could not count in one hand how many times I hit a building because I cannot control my height.

Other than that, the controls while using MnK are straightforward. If you are playing a lot of RPG or even FPS, then you will feel right at home.

The controls will feel clunky at times. Give it a few more tries and you will easily adjust to it and the experience gets better.

Before I proceed, I would like to note that I played the game on PC with the highest possible settings at 144Hz 1080p. There is not a lot of graphics customization so you will have to work with what’s available.

Aztech Forgotten Gods is an eye-candy when it comes to its environment. It is one of its strong points. The buildings look phenomenal and it provides an immersive experience. The game clearly nailed the futuristic mesoamerican setting.

The massive bosses’ design reflects the Aztec gods while monsters look great on their own. The skies look stunning too as it transitions from day to night.

Just look at the screenshot below and how the floor reflects the chamber. It is not perfect, but impressive per se.

However, as much as I enjoy the overall look of the city. The character models are lackluster.

Do not get me wrong, I love Achtli’s character design but the 3D model in-game did not give it justice.

It may seem like I’m focusing too much on the character’s hair, especially with Achtli and Nantsin. But their character design highlights those features well.

Their outfit looks great though and the Lienzo did a great job mixing classic Aztec and post-modern design. Yet, it is too blocky for my taste.

As mentioned earlier, the environment looks stunning and I am impressed by it. But once you drop down to the plaza and look at the NPCs, the disappointment comes in.

I know, they are NPCs, but they look like walking chess pieces. It destroys the beauty of its environment. One moment you are admiring the massive structures and once you see the NPCs, it’s disappointing really.

So for a PC and a modern console game, the graphics leave a lot to be desired. I know we shouldn’t judge a game based on graphics alone, but it is 2022 and there are a lot of things that Lienzo needs to polish when it comes to the visuals.

However, for a Nintendo Switch game, the visuals are excellent compared to other titles of the same genre. Launch this on the Switch OLED version and the environment will definitely pop out more.

To cap off the visual review, I would like to share what I experienced while playing. I could not stand the camera smoothing. I would launch the game, play for around 15 minutes and my head will start to hurt. It is nauseating. I thought that it was only me, but I browsed Steam Community discussion and others experienced the same.

Also, there are instances where a flashback would show flashes of light that might trigger epileptic seizures. There is a caution beforehand, but I did not expect it to be that worse.

Aztech Forgotten Gods put a lot of effort into the environmental audio and sound effects. Punching, jumping, and running all have the right audio and it is a job well done.

Going outside into the city, the subtle soundtrack playing is noticeable but it is not too intrusive, in the sense that it is all you can hear. However, adding more ambient sound would have added to the experience.

The downside is that the characters do not talk. Communication between characters is all but grunts and murmurs.

Remember earlier when I said that the talking gets boring? Combine that with murmurs, grunts, and slow-paced subtitles, it gets tiresome easily.

On a positive note, the boss fights are impressive. The soundtrack while fighting is good and hypes up the battle.

However, it would have been better if the music was a mix of EDM and classic Mexican/Aztec music. The rock soundtrack is fine but sometimes it felt too generic.

Aztech Forgotten Gods is a fun action-adventure game set in a futuristic Mesoamerican city. The visuals are great – not the best in its class – but more than enough to immerse you into the game. Pacing is a little slow yet it is the perfect mix of story, action, and lore.

The game has stunning visuals and a great storyline but the janky camera, limited control options, visuals, and audio hold it back from getting a perfect score.

Now, is it worth getting?

Well, if you are interested in air battles, movement, and a great story, then go ahead and punch your way in Aztech Forgotten Gods.

This review is based on the PC version of Aztech Forgotten Gods. The key was provided by Lienzo.