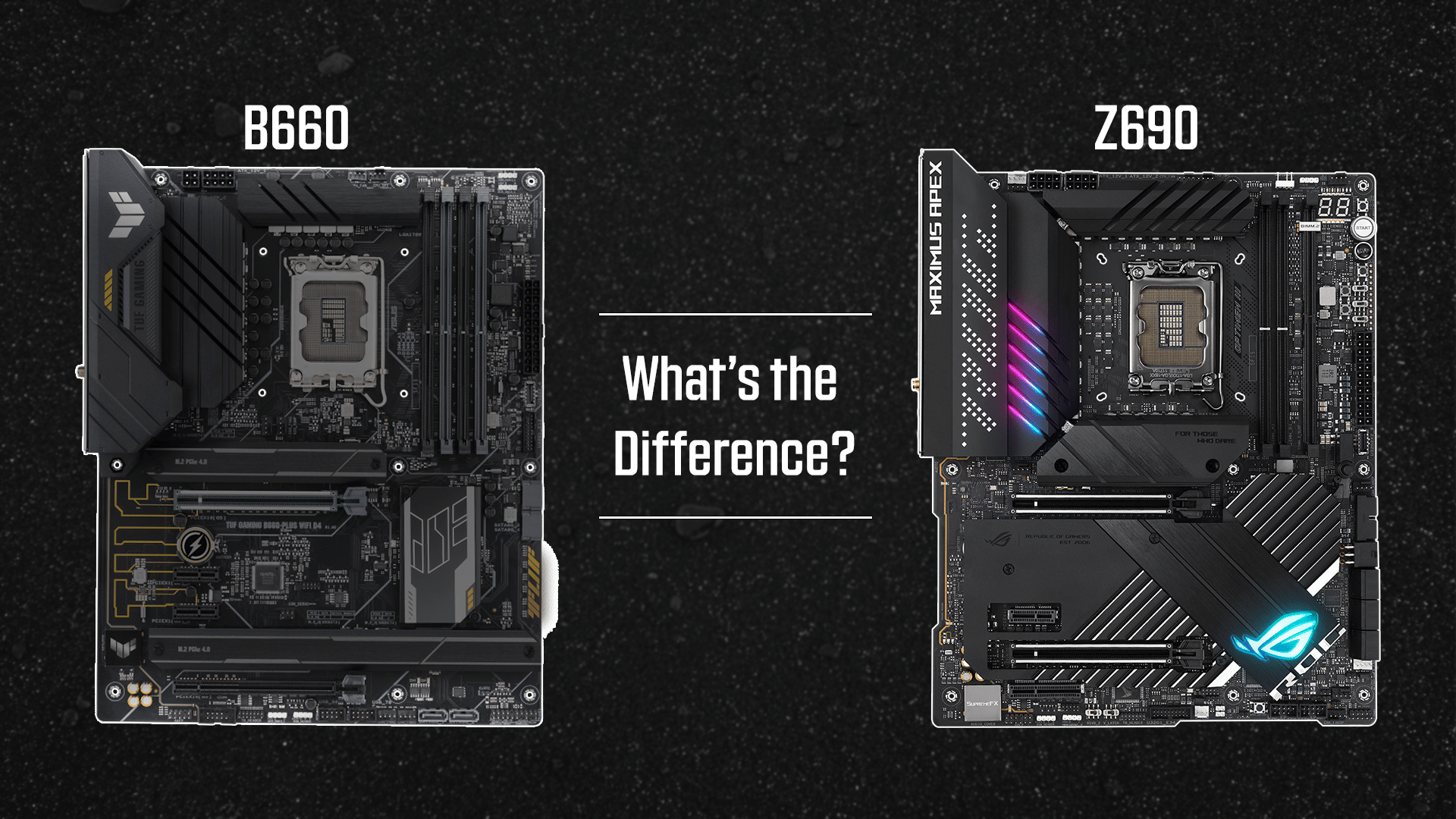 Alder Lake marks Intel’s return to form, bringing sweeping changes and monumental gains. It uses the LGA 1700 socket, so you’ll have to get a new motherboard if you wish to experience the full benefits of this amazing CPU generation.

The B660 and the Z690 are two of the most popular chipsets supporting Alder Lake, but, which one of them should you get? What sets them apart? The differences can be confusing if you haven’t been keeping up with motherboard development, so we’ve done the research to set your mind at ease.

The two most talked about LGA 1700 chipsets have much in common. They both work with either DDR4 or DDR5 RAM and feature the new WiFi 6E standard or the possibility of its implementation anyway. You can also slot any processor from the 12900KS to a lowly Celeron into either board type.

We’ll go over everything in more detail below, but overclocking prospects, connectivity, and PCIe lane count are the main points to consider in the Z690 vs. B660 debate. The table below provides an exact overview of these differences. Naturally, manufacturers have come up with a wide variety of boards for both chipsets that fulfill their potential to varying degrees.

When we’re talking about B660 and Z690, we refer to them as chipsets. Think of the chipset as a motherboard’s control center. It’s made up of one to several chips and controllers that ensure the CPU, GPU, RAM, and other parts of the motherboard are connected and work in sync. Essentially, the two chipsets differ based on the number and complexity of their components. These then impact the sophistication and amount of features a motherboard can support, like available storage devices, USB ports, headers, etc.

Users familiar with Intel’s naming structure can already get an idea of what to expect. Z-series chipsets are aimed at enthusiasts and are the most sophisticated in each generation. The B-series has a reduced feature set with a lower price point that makes it more appealing to budget-conscious buyers.

While these two are the most well-known, two more motherboard types were released in January of 2022. H670 boasts most of Z690’s features, overclocking being the most significant omission. H610 is on the other end of the spectrum. It lacks all but the essentials and is best suited for users running locked CPUs who don’t have high storage or connectivity demands.

Overclocking almost always comes up when discussing how to push your PC to its limits. For the CPU, it means tinkering with the multiplier and voltages to get its cores to run as fast as they can while remaining stable. It used to be a tedious and tricky affair. Now, all you need is a processor with a K in its name and a willingness to adjust a few advanced settings in the BIOS.

This is the only B660 vs. Z690 metric where there’s no room for compromise, as B660 doesn’t allow overclocking. This makes Z690 highly desirable among enthusiasts and is likely the single greatest reason some of them will go for one. That doesn’t mean you shouldn’t pair a CPU like the 12600K with a B660 board – you just won’t be able to push it past factory safety limits.

Any Alder Lake processor paired with B660 will work within the manufacturer’s specified parameters. This means technologies like Turbo Boost function as intended even though conventional overclocking doesn’t. While you can’t reach the pinnacle of a processor’s capabilities without it, advances in CPU architecture have made the practice less impactful.

The situation is reversed when RAM is concerned. You’re practically obliged to overclock since sticking to a kit’s stock frequency means leaving a considerable chunk of potential performance unutilized. The drawbacks of not overclocking are more pronounced for DDR4, but DDR5 owners will also experience a performance hit if they forget to turn XMP on.

Luckily, both Z690 and B660 come with the XMP profile feature. It allows you to enter the BIOS and bring the RAM to its maximum advertised factory clock. Some kits with quality ICs also allow for further overclocking at the cost of more power consumption or looser timings.

The type and number of PCIe lanes supported by each motherboard type have a significant impact on connectivity and future-proofing. LGA 1700 mobos are particularly interesting as they’re the first to house three generations of lanes.

PCIe 5.0 is the 600-series’ most forward-thinking technology. Current graphics cards don’t come close to maxing out PCIe 4.0 bandwidth, and the same will likely be true for the next generation. Still, it’s a feature worth considering if you plan on sticking with Alder or Raptor Lake for a while.

The chipset may present a bottleneck to the amount of data required to support a graphics card, so the associated lanes are always CPU-bound. Z690 motherboards can either run the primary PCIe 5.0 x16 slot at full speed or include the second slot in a 2×8 configuration. B660 boards can only do the former.

Keep in mind that these are theoretical maximums not guaranteed to exist on every model. Combining multiple GPUs has fallen almost completely out of favor and might even be counterproductive in some cases, so not many Z690 models support the split. Most B660 models prudently offer no more than PCIe 4.0 to keep the cost down and don’t support PCIe 5.0 natively. There are exceptions, but they are few and far between.

Both chipsets offer several PCIe 4.0 and 3.0 lanes for your high-speed storage and expansion card needs. However, there’s a sizeable difference since B660 comes with eight PCIe 3.0 and six PCIe 4.0 lanes, which is only half of what you can theoretically get on the more advanced chipset.

The uptick in overall lane availability has put high-speed storage at the forefront. To put this into perspective, three M.2 slots were reserved for high-end Z models until Rocket Lake. Now, most B660 motherboards have them.

Five is the maximum amount of M.2 slots available on Z690 boards. Some support them natively, while the ASUS ROG Maximus Z690 HERO has an add-in card that provides room for two on top of three integrated into the board itself. Moreover, it’s not uncommon for all the M.2 drives on a Z690 board to be PCIe 4.0.

The CPU-fed slot will always make use of PCIe 4.0×4 speeds. Depending on the quality of the drive you put inside, you can expect transfer speeds greater than 6,000MB/s! B660 boards usually have two PCIe 4.0 and one 3.0 slot, PCIe 4.0 x2 sometimes replacing the latter. Familiarize yourself with the layout before populating the slots to ensure you’re not artificially hindering your drives’ transfer speeds.

Let’s not forget good old SATA 3 either. There’s no question about who wins in this B660 vs. Z690 matchup. Most Z690 motherboards come with the standard six SATA plug configuration, but eight is the platform’s maximum. The legacy drives are limited to four on B660. Some manufacturers get around this by adding two more ports through additional chips.

One of the ways you can quickly tell B660 and Z690 apart is by examining the board’s I/O. While not as drastic as the cut to PCIe lanes, B660 boards come with noticeably fewer USB ports.

They theoretically max out at two 20Gbps USB-C ports and almost always come with one, if that. There’s also room for twice as many 10Gbps and six 5Gbps connections. USB 2.0 has seen the least pruning, so you’ll often find it taking up half or more of the back I/O’s USB lineup.

There are no hard & fast rules when it comes to other connection types, but general principles still apply. B660 motherboards are more likely to have fewer headers for system fans and Thunderbolt add-in cards. They are also unlikely to come with better audio and advanced features like voltage read points, sensor headers, and LED debugging tools.

Z690 is the generation’s flagship chipset, so having to pay more for it comes as no surprise. However, knowing that a chipset is the best doesn’t tell you what kind of variety or pricing extremes to expect.

You could end up paying around $250 for a model that’s only slightly better equipped than the best B660 boards. Conversely, models like the Gigabyte AORUS Xtreme or ASUS ROG Maximus Apex prove that the sky’s the limit if you have the cash to spare.

B660 boards are noticeably cheaper, but they come with their own challenges. On the one hand, B660 is more expensive as a whole than B560 was. It used to be that you could build a fierce gaming PC around a $100 mobo, which is no longer possible. On the other hand, you have to pay close attention to reviews and spec sheets since not all similarly priced models offer the same value.

Which features can you not live without? The answer to that question goes a long way in determining the better pick. Overclocking, room for many current-gen M.2 drives, and a heap of USB ports to connect all of your devices make getting a Z690 motherboard a no-brainer for enthusiast buyers. There’s also more robust VRM that ensures the CPU’s surroundings will remain cooler.

That being said, B660 is a compelling platform for a large segment of the market. If you’re fine with having 1-2 fast SSDs and just want everything to run smoothly without tinkering, then Z690 might be overkill. Putting the money you’d save on the motherboard towards a better CPU or graphics card would immediately elevate your build.

Whichever chipset you go with, remember to look into individual boards more thoroughly to get one you are happy with at the best possible price.

By Matt Vallence
Matt has been staring at one monitor or another for much longer than he'd care to admit. He enjoys keeping up with trends in gaming & related hardware, exploring immersive worlds in RPGs, as well as crafting his own using Blender.
3 Comments