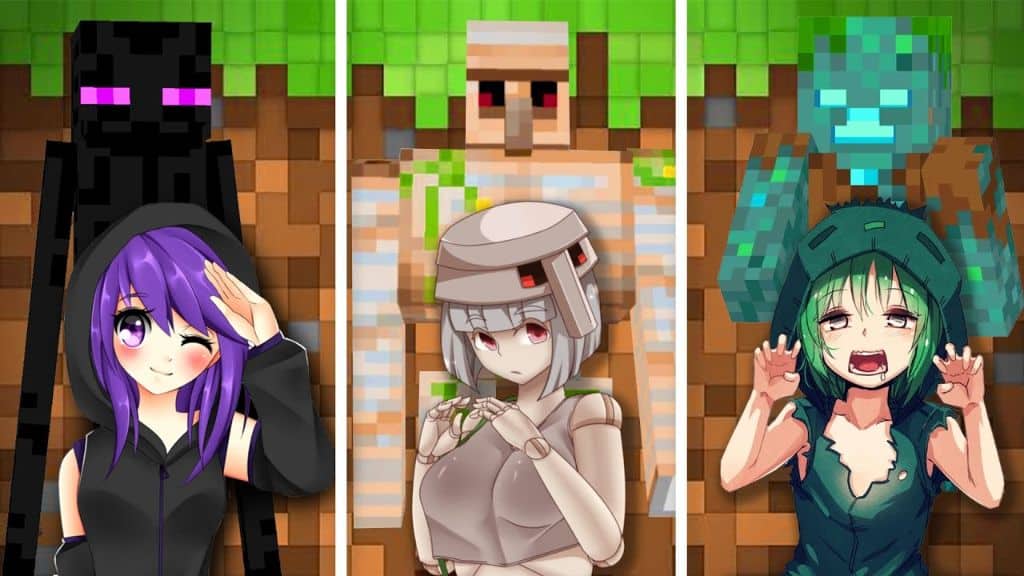 Minecraft is still very much popular nowadays especially when you consider that people can basically do whatever they want with it. Of course, Minecraft will only become more interesting with the use of different texture packs and different things to build. If you are a big fan of anime, you can create a lot of interesting worlds by making use of these best anime Minecraft texture packs.

Naruto will always be one of the best and most popular anime series in history. There are plenty of lovable characters and images that you can find in the Naruto anime. And let’s not talk about the nostalgia that comes with Naruto.

So, if you wanted to create your own Naruto universe in Minecraft, using this Naruto Texture Pack can be a great way for you to relive your Naruto memories. There are plenty of different things that are interesting in this anime texture pack such as the ore textures and the fact that Endermen are actually made to look like Akatsuki. And, guess what, when you up killing these Akatsuki Endermen, expect to get a Sharingan in return.

Demon Slayer or Kimetsu no Yaiba, as it is what it is called in Japanese, is one of the most popular anime series in recent years due to the engaging story and the amazing animation that comes with it. It is needless to say that there are plenty of different Demon Slayer fans in the world.

For those who want to create their own Demon Slayer world in Minecraft, we introduce to you a Demon Slayer Pack that comes with different Demon Slayer-themed textures that you are surely going to love the entire Kimetsu no Yaiba world. Imagine your characters looking like classic Demon Slayer heroes.

Even though it isn’t necessarily one of the best and most popular anime series around, Sword Art Online or SAO is actually quite popular among “isekai” anime lovers and is also quite endearing to MMORPG fans all over the world because it’s basically an anime about an MMORPG. Of course, SAO comes with a lot of beautiful visuals that are eye-captivating.

If you want to create your own isekai world on Minecraft based on the world of SAO, then you can make use of this SAO Pack which comes with a lot of different textures that come from the world of Sword Art Online. This includes all of the beautiful swords featured in the series.

In case you have forgotten, one of the main reasons why you are even using anime texture packs or even texture packs, in general, is that you want to have fun in Minecraft. You are basically playing with the textures so that you can get out of the usual mundane default texture packs. And if you love anime, using this Anime Meme Texture Pack will allow you to have different anime memes scattered all over your Minecraft worlds so that you can get a good laugh whenever you need it.

There are plenty of different Dragon Ball Z fans all over the world because it still stands as one of the most popular all-time great anime series in history. Of course, the different power levels and fight scenes are what catch the eyes of any Dragon Ball Z fan.

So, if you want to relive your Dragon Ball Z childhood in Minecraft, you can make use of this Dragon Ball Z Kai Pack, which features different textures of your favorite Dragon Ball Z characters. You can now Kamehameha your way through those Endermen!

While not necessarily in the level of the popularity of Naruto and One Piece, Fairy Tail is actually pretty popular among different anime fans. The hilarious moments and the amazing action that comes with this anime series are what have made it endearing. And if you want to recreate your own Fairy Tail anime world in Minecraft, this Fairy Tail Pack will do wonders for you and your desire to actually play using Fairy Tail characters and structures.

One of the longest-running anime series that is also quite popular among different fans that have been watching anime since the 90s is One Piece. The story might be too long but it is worth the time and effort you will invest in watching the series.

Of course, because One Piece is quite popular, you can make use of this One Piece Texture Pack, which features different textures that will allow you to relive your One Piece dreams. So, if you are tired of waiting for the series to end, you can create your own One Piece story in Minecraft!

Attack on Titan or Shingeko no Kyojin in Japanese is one of the most popular anime series of the decade because of how engaging the story is and how it comes with all of those different twists and turns. Of course, it’s going to be lovable getting chased or killing all of those Titans. In that regard, you can download this Attack on Titan Pack, which allows you to recreate your own Attack on Titan world on Minecraft

My Hero Academia is rising in popularity and is nearly at the level of Naruto in terms of how favored it is among different anime fans. Of course, the heroes in the anime are some of the best-written characters you can find.

So, if you want to recreate the anime on Minecraft, this My Hero Academia Pack is surely going to give you loads of fun because of how it comes with different My Hero Academia textures that amazingly resemble the characters and the different things you see in the anime series.