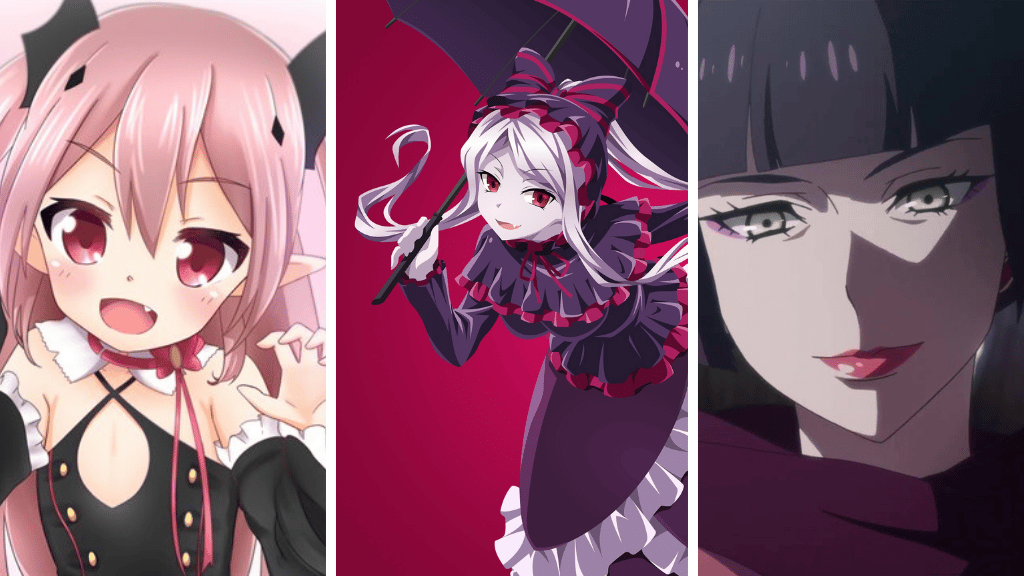 There is just something extremely attractive about bloodthirsty anime vampire girls.

Don’t you just love how horrifyingly powerful they are when it comes to fighting?

The best part is that most of these girls have unlocked immortality! Isn’t that just breathtaking?

If you’re looking to know more about these characters, you will absolutely love today’s post.

Let’s get right into it!

Although Seraphim is a highly attractive vampire-ninja, you would be quite surprised at how obsessed she is with becoming a master swordsman.

Her immense admiration for the ‘Tsubame Gaeshi’ sword style is only rivaled by her devotion to her master, Eucliwood Hellscythe.

Unsurprisingly, Seraphim’s most important goal in life is to have Eucliwood take her as a servant.

What’s sad about this young anime vampire girl is that she knows nothing but misery thanks to her homeland always being the place of war.

After receiving a deadly gunshot wound, poor Seras began to give up hope.

Thankfully, Alucard saved her life in the nick of time by converting her into a vampire.

Before her leap of faith into the world of vampires, Seras was a charming police officer with cute blonde hair and shiny blue eyes.

Now her hair has lightened into a silver color and her eyes have become crimson red.

The most seductive character in Overlord is none other Shalltear Bloodfallen.

Peroroncino had created Shalltear in order to reflect his very own lustful personality.

Thanks to that, Shalltear is a vampire that contains the strongest sexual desires out of all the NPC characters in Nazarick.

Shalltear is also a floor guardian and as a true vampire, she takes her job very seriously.

Redcurrant is not just some ordinary vampire. She is a Leannan sidhe. This means that whenever she sucks on a human’s blood, that same human will gain certain talents.

Despite her bloody ways, Redcurrant is absolutely drop-dead gorgeous thanks to her pretty red eyes and short blonde hair.

You would be quite hard-pressed to find a vampire more glamorous than Krul. Her stunning black dress combined with her red cape gives off quite an alluring outlook.

However, she is not as kind as the other vampires on this list as she views humans as nothing more than food.

Krul’s hatred for humans stems from the fact that she hates greedy creatures and because of that she has collected a large group of humans so that her fellow vampires have a steady food source when the world comes to an end.

As the antagonist of one of the most notoriously horrific anime of all time, Sunako fits the spot perfectly thanks to her pitch-black eyes and her obsession with an isolated village that screams death.

Although Sunako has the appearance of a kawaii young girl, you would be quite surprised when you learn that she is the leader of a group of Shiki (corpse demon) monsters whose only method of survival is the consumption of humans

Moka Akashiya has a dual personality which occurred as a result of the use of rosary that suppresses the sinister personality of a being with vampire blood.

‘Outer’ Moka is a very loving person who cares greatly for her inhuman friends. However, ‘Inner’ Moka can make her ghastly appearance if Moka’s Rosario cross were to be removed.

Initially, Saya was a cheerful and jubilant vampire who liked nothing more than to spend time with her best friends, Diva, and Hagi.

But all of that changed after Diva murdered Saya’s adoptive father, Joel, during his birthday party.

Saya then developed a no-nonsense demeanor as the only thing that fueled her desire was the thirst for vengeance.

Shockingly, Youko is not just a vampire, she is also human! Known as a dhampir, Youko is the daughter of a demon male and a human female.

And, because of that Youko’s school life has become quite bungled up since her secret was revealed after one of her classmates had witnessed her wings being spread wide.

Despite her secret, she is still a very lovable young girl who loves making new friends at school.

As a noble anime vampire girl, Rima possesses immense beauty thanks to her creamy skin tone that contrasts perfectly with her orange-colored hair wrapped in locks of gold.

Unsurprisingly, she is also a model who is not just famous for her good looks.

In fact, she is one of the fastest characters in all of ‘Vampire Knight’ thanks to her lightning style abilities.

Who knew that a vampire could still be called royal after murdering countless innocent young boys in order to preserve her youth?

Agatha has successfully maintained her alluring appearance for the last 120 years but what’s more frightening is that despite losing two limbs (uses prosthetics now), she is still an extremely swift vampire who is able to dodge deadly attacks from the main character of the show: Yuliy.

Perhaps the most royal character on this list is none other than the queen of vampires herself, Mina Tepes.

Even if Mina appears to be quite emotionless and impolite to the people around her, she is always willing to be compassionate when it comes to the Bund.

Although she is termed ‘antagonist’ because of her murderous onslaught against her sister’s family, Diva does not truly have any evil intent as she was just fed up with her sister finding a loving family while Diva had to suffer in solitude.

Diva yearned for a family just like the one Saya had. This jealousy led her to commit several murders that ruined the life of her sister Saya.

Yue is a former princess whose life fell into shambles once she was imprisoned inside a large space of nothingness.

She has wavy golden colored hair that is tied by a black bow.

Although Yue has a childlike appearance, she is capable of changing her body into an adult form and a teenage form as well.

Never could have I ever imagined a vampire would be able to pull off a hairstyle this bizarre.

Maaka is a gorgeous young vampire who has sparkling green eyes and dark green hair.

The funniest thing about Maaka is that her breasts are so well endowed that just looking at it was enough to make a vampire hunter faint on sight.

Shinobu might just have one of the most tragic backstories ever.

While she was a human child princess, an evil had laid a curse upon her which caused everyone around her to commit suicide.

Devastated by all this, she departed on a journey after changing her name to Acerola.

What’s horrifying about this anime is that Shinobu actually wished to become an anime vampire girl in order to eat all the corpses so that their suicides won’t be in vain.

As a part of Tsubaki’s subclass, Otogiri is a special vampire who can live without ever being harmed by the sunlight.

Surprisingly, she is also a talented ventriloquist which is exemplified by the fact that she manipulated a puppet to break a bond.

When I think of a vampire, Carmilla is the exact image that pops into my mind. Fair skin, sharp crimson nails, and long wavy black hair.

These traits give Carmilla a very dark demeanor.

Surprisingly, Carmilla is quite a seductress who loves nothing more than capturing several young women and adding them to her vampire collection.

At over 800 years old, Arcueid might just be the oldest character on this list. What’s funny is that she make several appearances at her friend’s high school only to display her childlike behavior.

Since Arcueid spent a lot of time in solitude, she does not know how to commonly interact with people and is therefore quite socially awkward.

Megumi was the first victim of the Kirishiki family.

A few days after her demise, she was reincarnated as a zombie corpse who terrorized numerous people including the people who were close to her crush, Natsuno.

Megumi belongs to the town known as Sotoba and because of that, she gets quite a bad reputation amongst her people.

I hope today’s post gave you your fill of blood.

Which of these 20 anime vampire girls did you like the best?

Either way, let us know by leaving a comment down below.