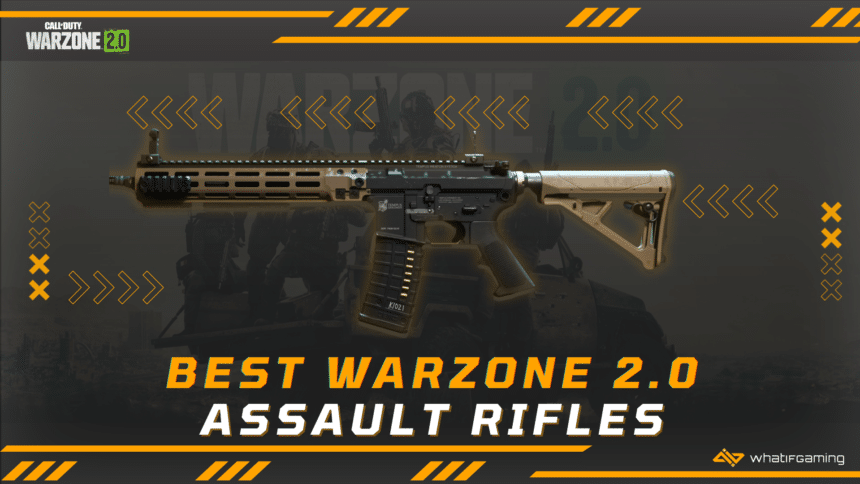 Assault rifles in Warzone 2.0 are great weapons that are the main gun of choice for most players. They are ideal at close/medium range since they have a lot of damage and a good fire rate as well. If you want to know which AR to use, you’ve come to the right place.

We will show you the best assault rifles in Warzone 2.0 so that you can decide which one is worth picking up and using your attachments on. Keep in mind that this list will be constantly updated depending on the meta. With that said, let’s dive right in and get started!

What Is the Best Assault Rifle in Warzone 2.0?

The best assault rifle in Warzone 2.0 is the Kastov 74-U. If you don’t mind the high recoil, this gun will prove worthy by providing high damage and an amazing fire rate. The best part is that it also gives you more mobility thanks to its lightweight. Other assault rifles cannot compete with it when it comes to close-range combat.

Starting off with the best assault rifle in Warzone 2.0, the Kastov 74-U. It has a high fire rate and hits like a truck. When it comes to close-range fights, there is no way any other weapon will outperform this. However, due to its high recoil, you will have issues while using this on longer ranges.

The best part is that since it is a lightweight weapon, you will have enhanced mobility as if you were holding an SMG. Before you use any attachments, this gun only excels at close range. However, when you progress and unlock the relevant attachments, you will notice that this weapon is almost perfect and easily the best assault rifle in Warzone 2.0

I almost put the STB-556 at the first spot due to how good it is. You can easily take out enemies even at medium ranges, thanks to its precise aim, damage, and amazing recoil control. The STB-556 is one of the best ARs in Warzone 2.0 right now and you should take advantage of it as much as you can.

However, the reason why it’s not number one is due to its low fire rate. Warzone 2.0 is a fast-paced game where every second matters. This is especially true if you are fighting someone at close range in a building or any enclosed space. If your opponent has a weapon that has more fire rate, chances are that you will lose that fight.

The M13b is a weapon that has come back from its grave due to popular demand. It was the best weapon in Modern Warfare 1 (2019). It can be unlocked after killing the chemist in DMZ mode. It has a very good firing rate and overall tremendous damage.

The M13b is a part of the season 1 update. It is very overpowered as of now. You can immediately spray down anyone in under a second, thanks to its tremendous firing rate, all while having little to no recoil.

The M4 is an iconic weapon that is preferred by most players. If you are a new player, this is the first assault rifle that you’ll unlock, and it will absolutely help you to win more games or get eliminations. If you’ve used this weapon before, you will know that it has a high fire rate and a good amount of damage.

Plus, the M4 also has a precise aim which is quite rare since most rapid-fire rate weapons don’t have good recoil control. However, to balance it in Warzone 2.0, the devs have increased its recoil a bit which can be a bit of a downside. Nothing a few attachments cannot fix!

You might instantly recognize this gun because it is based on the AK 47 rifle. As such, the Kastov 762 boasts high damage and a decent fire rate. If the other player isn’t geared up or has been damaged previously, you will finish them swiftly thanks to your high bullet velocity.

However, as you might have suspected, the Kastov 762 is a victim of high recoil. Due to that, taking medium-range fights can be a bit problematic, especially against someone who is using the M4 or the STB-556. If you can look past the high recoil issues and add a few good attachments, you will have a great time!

Highest damage in all the assault rifles

Moving on to another Kastov, this time the Kastov 545. It is a decent weapon at close ranges, thanks to the high fire rate. While the overall damage isn’t what you would expect, the fire rate allows you to have a decent damage output.

However, with a high fire rate, you can expect it to have bad recoil control. Even at close ranges, you will feel the effects of its recoil in some cases. If you can manage to control the recoil with a few attachments, this is a great close-range weapon that will get you a few free and quick kills.

After using the Lachmann-556, I have mixed feelings about it. On one hand, it is a powerful gun with good damage and a decent fire rate. However, on the other hand, it is not worth it in the current meta when you have better options available.

If we are to overlook the STB and M4 for a bit, you will have a great time with the Lachmann-556. This is especially true if you are a new player. Thanks to the good damage and recoil control, you will get a few free kills here and there.

Lower fire rate than the STB

Lower damage than the M4/STB

I love the Chimera due to a number of reasons. This weapon has a high fire rate, and the recoil is quite easy to control as well. I would love to put the Chimera higher on this list, but it falls flat due to its low damage. Players are comparing it with the STB or the M4.

However, both those weapons have a higher damage output which makes them better and worth picking up. If you cannot get your hands on other weapons, the Chimera is a decent choice. But, if you come across a squad or more than one player, you will have a difficult time dealing damage to them if they have armor.

The TAQ-56 is an assault rifle that has very low recoil control and suffers from a mediocre firing rate. It is best used in close to medium-range encounters. The damage is better as compared to other assault rifles in this list.

Because of the high damage, this weapon is best used in a controlled manner, such as shooting in bursts instead of spraying the whole magazine. In order to make better use of this weapon, you need to use attachments that will increase recoil control and increase overall accuracy.

The M16 is the least effective assault rifle in the game, that is the reason why it is the last entry in our list. It features low recoil, which is a plus but has a very low firing rate and overall adequate damage.

One of the biggest drawbacks that this gun face is that it can only shoot in a burst firing mode. Although being very effective at long range, this burst firing mode can become a double-edged sword very quickly. As you will never be able to mow down someone at close range.

only shoots in burst

There you have it. These are the best assault rifles in Warzone 2.0. These rifles will help you laser the enemy at close/medium ranges. Whether you are fighting someone in a building or in an open field, you cannot go wrong with these ARs.

Which assault rifle do you like most? Do you agree with our list? Let us know your thoughts in the comments below! In the meantime, check out our guide about the best Warzone 2.0 loadouts as well!