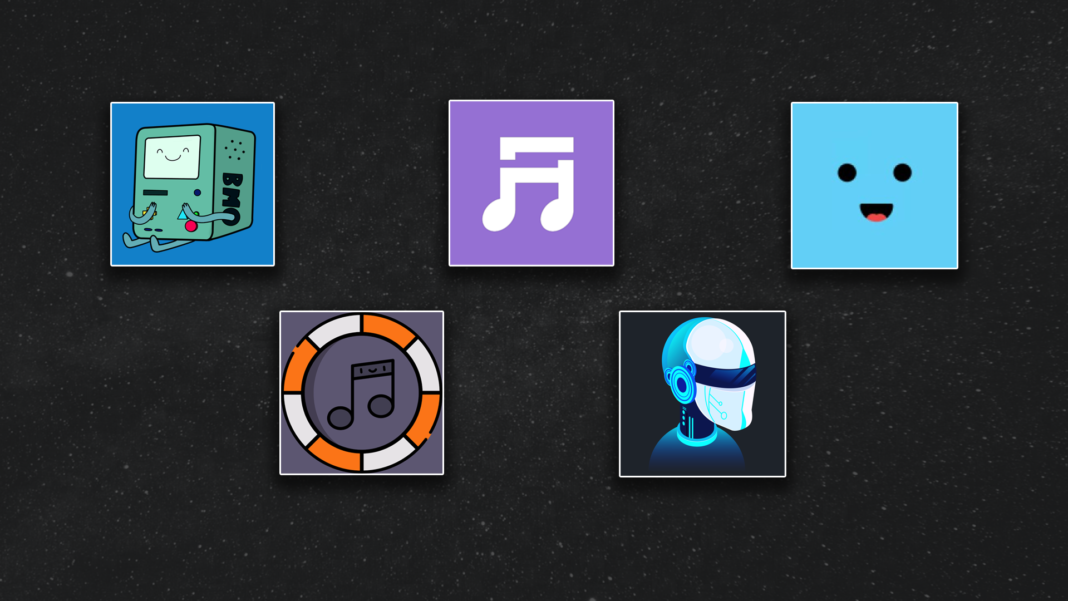 Discord music bots are an essential part of any Discord server, we have picked the very best to make your choice that much easier.

Music bots are a great way for you and your friends to chill out and enjoy music together, listen while playing, chilling, or even studying. They are an amazing and essential part of a Discord server and help make the environment fun and relaxing.

Unfortunately, some of our most beloved music bots like Rythm and Groovy have been taken down by YouTube because violated their Terms of Service. These were two of the most popular music bots on Discord and were used by millions daily.

When Rythm and Groovy were taken down in 2021, everyone started looking for other music bot alternatives and that’s why we are here to help!

We’ve searched all over the internet in hopes of finding the best Discord music bots. We ranked 10 of the currently available and working music bots. If at any point, one or more of these bots stop working, we’ll make sure to update the list and add in some new bots.

Starting off the list, we have MEE6. MEE6 isn’t only one of the best music bots, but it’s just hands-down one of the best Discord bots out there. It’s one of the most trusted and added by over 16 million servers worldwide. It is used on a daily basis to moderate servers and play various songs.

Some of its other common functions include welcoming new users, assigning roles, creating custom commands, adding custom alerts, and even supports additional plugins. There’s also a paid version where you can unlock more features and tools for your server.

Next up, we have Hydra, an all-in-one multipurpose bot that claims to be the only Discord bot you’ll ever need. The bot is available on a wide range of platforms and a wide range of languages, allowing you to use it no matter what device you have or what language you speak.

Hydra also sets up a unique song request channel, so you don’t have song requests mixed up with general messages. The bot also comes with a web dashboard to customize commands and syntaxes. Additionally, server members can easily get roles by simply reacting to interactive messages and assigning roles for themselves.

Vexera is an amazing music bot that also has some moderation, greeting, and entertainment functions. It primarily plays music from YouTube, and you can even enter YouTube links directly. However, Vexera can also play music directly from Spotify, only if you are a premium subscriber.

Aside from playing music, Vexera can also send you memes, funny or cute GIFs, and send in yo mamma jokes when requested. Vexera’s premium subscriptions start at $3 per month and go up to $5 per month. Getting the premium plan allows you to run two Vexera bots within the same server and have a 24/7 guaranteed uptime.

Like most other music bots on this list, ProBot can actually do more than play music. It’s more of an overall moderation and support bot that can also play music when needed. It gets music directly from YouTube and supports playback of YouTube links. Unfortunately, it doesn’t support Spotify at the moment.

ProBot also has some fantastic moderation features that can help you remove spam bots in Discord. It also has unique features such as raid protection, a good leveling system, and adding customized welcome images to greet new users. ProBot has a 99.99% uptime and is trusted by over 4.3 million servers worldwide.

The 24/7 Discord music bot got its name because it can literally play nonstop music on Discord. It’s the first pure music bot on our list. It can play audio from different sources, including radio and live streams.

Unfortunately, one downside is that you can’t play direct YouTube links or any YouTube music for that matter. But you can still search for your favorite audio using the query function. It also has a slower reaction and response time compared to other bots on this list. But, at least it can continuously play audio without any limits.

Next, we have another dedicated music bot player called Chip Bot. Chip is a fantastic powerful little bot that requires no setup and is very easy to control and use. Unfortunately, it no longer supports playing music from YouTube and only takes audio from Spotify. But, you can at least play Spotify song links or even playlists.

One thing that’s unique about Chip Bot is its interactive music player. It has buttons to pause or play the song, skip, stop, and show you the queue. It’s one of the very few bots that have this feature and allows for an easier way to control your music.

BMO is a bot inspired by a character from the hit series Adventure Time, with the same name. It’s a powerful little bot that has a lot of built-in it. Obviously, BMO can play high-quality music from different sources. You can still play YouTube audio and links, but it doesn’t support any Spotify music.

Some of its other functions include video and image manipulation, role-playing, sending NSFW messages, server moderation, and setting reminders. Unfortunately, it’s one of the bots with a slower response time, but once it’s in a server, it does start to respond pretty quickly.

FredBoat is another well-trusted bot. It supports music playback from YouTube, Soundcloud, Twitch, and Bandcamp. It also supports direct links and playing playlists or live streams. Unfortunately, it doesn’t support Spotify as of the time of writing.

It’s added on over 4 million Discord servers and offers its services for free. There are also tons of different commands such as showing a user’s Discord PFP, doing basic calculations, displaying the weather, sending random photos or GIFS, among many others.

Next, we have a bot that’s purely dedicated to playing Lofi music. A lot of people enjoy listening to lofi music while studying or working. This is bot offers a 24/7 lofi music playback with a 99% uptime guarantee.

Chill Bot provides amazing quality audio, as long as your Discord server level supports high-quality audio playback. It would’ve been higher on the list if only it played or supported other types of audio and music. Overall, Chill Bot is still a great bot if you enjoy listening to lofi music. At least, you don’t have to search for lofi music anymore.

It’s a simple bot with a lot of customizable commands and adjustable properties to create a unique listening experience. You can also use the bot to directly sign in to your Spotify account to play your own playlists and music.

Those were our picks for 10 of the best Discord music bots that you can use in 2022. We ranked them according to their popularity, how great they work, and their overall reliability. Hopefully, we’ve helped you find the next music bot for your Discord server.