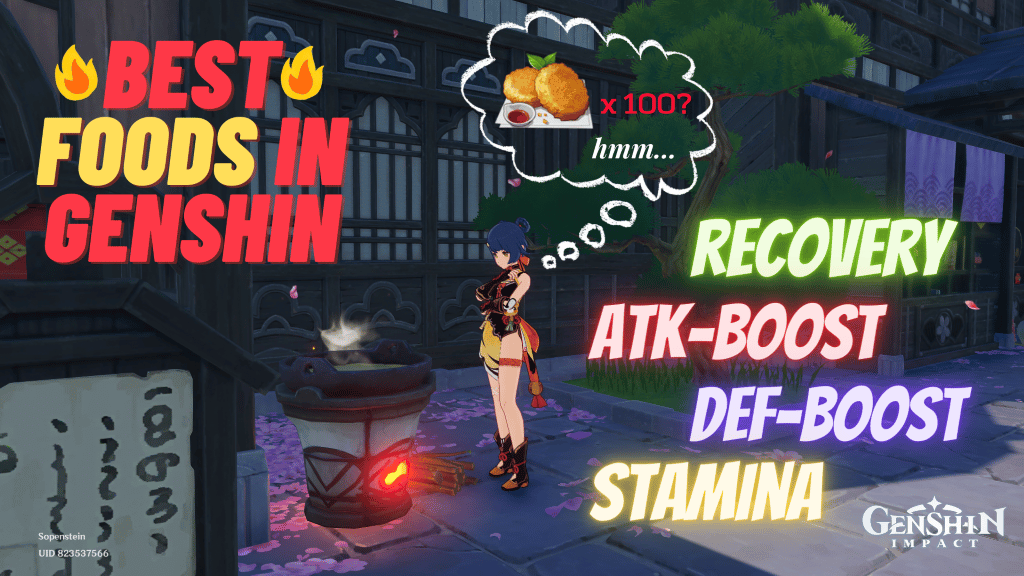 For Genshin parties without a reliable healer, cooking food is a priority before each adventure. When you have a recovery dish in your inventory, an entire fight can end in your favor. Past the repetitive daily commissions, weekly boss fights, and never-ending artifact grind, Genshin Impact has a straightforward cooking feature that makes anyone into a Master Chef overnight.

Currently, the game has 96 available recipes for travelers to master. Each dish serves a unique purpose. You’ll find specialties that restore HP or revive a fallen character, food that boosts a party’s ATK and DEF, and delicacies that restore Stamina or decrease its consumption. With so many recipes to choose from, what are the best foods to cook in Genshin Impact? Let’s dig right in and find out!

Recovery Dishes are of two types: one for reviving a fallen character and one for regenerating health. A bulk of all Genshin Impact recipes are recovery dishes. Here are the best foods to make for this category.

Travellers learn the recipe for Teyvat Fried Egg early on in the game. As soon as you unlock the cooking feature, this recipe is already accessible. The 1-star recipe only requires one Bird Egg to cook. This is the best revival food in the game because of its low cost. Bird Eggs are readily available and can be found all over Teyvat in trees, fields, rooftops, and many more. By the time you reach AR 50 and above, you won’t even notice that you have already gathered hundreds of them!

Bird Eggs can also be obtained by sending your characters on expeditions to Mondstadt and/or Inazuma. Talk to Katheryn and pick either Mondstadt or Inazuma. After 20 hours, you can get as many as 24 pieces of Raw Meat.

The runner-up revival dish worth making when Bird Eggs are scarce is Steak. Steak is also a 1-star recipe that requires two pieces of Raw Meat to cook. Like Bird Eggs, Raw Meat is easily accessible and can be obtained by killing wild beasts loitering in Teyvat. You can also dispatch your characters on an expedition that has Raw Meat rewards.

A recipe available at the start of the game is the 2-star Sweet Madame. This dish is highly recommended no matter what AR level you might be for two reasons: ingredients are easy to obtain, and it heals a generous amount of HP. Travelers can gather two Fowl and two Sweet Flowers to cook one Sweet Madame. Fowl is obtained by killing any flying animal in Genshin, while Sweet Flower can be scavenged in the wild. Conveniently, you can also dispatch characters on an expedition to Mondstadt and Inazuma to get these ingredients.

Another excellent healing dish is the 3-star Mondstadt Hash Brown. Compared to Sweet Madame, this dish restores around 10% more of a character’s Max HP. It requires two Pinecones, one Potato, and one Jam to prepare a dish. You can obtain this recipe by completing the Temple of the Wolf Domain.

The recipe’s ingredients are relatively easy to gather. Pinecone is only available in the wild and cannot be purchased from city stores. On the other hand, Potato is sold in the General Goods Shop in each nation. You can buy up to 100 Potatoes in each region daily. Lastly, you can process Jam or purchase it but for a slightly high price at restaurants.

The last healing dish worth mentioning is Mushroom Pizza. This pizza is a 3-star recipe located inside a treasure chest in a Hilichurl camp in Stormterror’s Lair. Unlike the previous dishes that only regenerate additional HP once, Mushroom Pizza restores 450-790 HP every 5s for the 30s.

A total of four ingredients are needed to cook one pizza. You’ll need to gather four Mushrooms, three Flour, two Cabbages, and one Cheese. Mushrooms and Cabbage are both found in the wild. However, you can also purchase Cabbages at the General Goods Shop. For Flour and Cheese, you can process it or buy it at the City Restaurants.

This 4-star buff dish is available for AR Level 12 and above players. Xiangling will give the traveler the recipe during her story quest. Early in the game, Jade Parcels is an excellent ATK-buff dish to invest in because, it increases not only all party members’ ATK by 224-320 but also their CRIT Rate by 6-10%. The buff lasts for a total of 300s.

The ingredients to make one Jade Parcel is reasonably easy to gather. You’ll need three Lotus Heads, two Jueyun Chilis, two Cabbages, and one Ham. Lotus Head is found around Teyvat in specific bodies of water. Alternatively, you could also grow your own in the Serenitea Pot or get them as rewards from daily expeditions at the guild. Jueyun Chili can only be gathered in the wild; The Traveler can find numerous clusters growing in Qingce Village. You can purchase Cabbages at the General Goods Shop in all cities, while Ham can be processed or bought at restaurants in most cities.

The next dish is a 4-star recipe, perfect for increasing a party’s Physical DMG and CRIT Rate. Tianshu Meat recipe is a reward when players’ Reputation reaches Level 7 in Liyue. The braised meat dish increases all party members’ Physical DMG by 25-45% and CRIT Rate by 6-10% for 300s.

To cook this dish, you’ll need four Raw Meat, two Sugar, one Qingxin, and one Matsutake. As mentioned above, Raw Meat can be obtained by slaying wild beasts in Sumeru or through expeditions. Sugar can be processed or bought at Restaurants. Qingxin is the hardest to obtain out of all four ingredients because it is primarily located in high mountains. Lastly, Matsutake is found in the wild in bushes, Sumeran wild Boards, bought at Wanmin Restaurant, or farmed through expeditions.

Another excellent dish for ATK boost is Adeptus’ Temptation. Although this 5-star dish is slightly tricky to cook and gather ingredients for, its 260-372 ATK buff and 8-12% CRIT Rate increase is beneficial when battling bosses or farming domains. The recipe is located inside a treasure chest on the floating island in Qingyun Peak. The Liyue cuisine requires the four following ingredients: four Ham, three Crabs, three Shrimp, and three Matsutake.

You can process Ham or buy it at the restaurants. Meanwhile, Crab can be found near lakes, riverbanks, and beaches. You can even purchase it from Uncle Sun in Liyue Harbor alongside Shrimp. Players can also buy Shrimp from the General Goods Shop in Liyue Harbor. Lastly, Matsutake is gathered in three methods: picked in the wild, purchased at Wanmin Restaurant, or farmed through expeditions.

The best and easiest food to prepare for DEF boost is Moon Pie. Travellers get the recipe once they reach Reputation Level 8 in Mondstadt. This staple 4-star Mondstadt delicacy increases all party members’ Shiel Strength by 25-35% and DEF by 165-235 for 300s. To make Moon Pie, you’ll need to gather the following ingredients: four Raw Meat, four Bird Eggs, three Butter, and two Flour.

Butter and Flour can be processed or purchased at the Mondstadt Restaurant, while Raw Meat and Bird Eggs can be farmed or received as rewards from expeditions.

An easy dish to cook to restore Stamina is the 2-star Northern Smoked Chicken that gives 40-60 Stamina. This dish comes in clutch when you’re just about to run out of stamina, a stroke away from the shore, a jump from the clifftop, or a foot away from the next ledge. You can obtain the recipe inside a chest in Stormterror’s Lair.

Only three ingredients are needed to make this dish. They are one Smoked Fowl, one Onion, and one Cabbage. Smoked Fowl is processed, while Onions and Cabbages are bought from the General Goods Shops. If you want to restore up to 100 Stamina at a time, you can make either Rice Pudding or Oncidium Tofu.

The best food to cook for decreasing Stamina consumption while gliding and sprinting is Minty Meat Rolls. This sour-and-spicy 3-star delicacy only needs four Mint, three Raw Meat, and one Jueyun Chili. Players can buy the recipe for 5,000 Mora at the Wanmin Restaurant.

Mint is found all over Teyvat, and if you’re religious in picking all items you see while adventuring, you’re sure to have bunches of them by now.

The only recipe available in the game that decreases the rate of Sheer Cold is Goulash. The 2-star dish is obtained by completing the Dragonspine Quest called “Ah, Fresh Meat!” Once eaten, the rate of Sheer Cold accumulation for all party members will decrease for 900s. You’ll need two Chilled Meat, two Carrots, and one Tomato to cook the dish.

You can only obtain Chilled Meat by killing Snowboars in Dragonspine. Meanwhile, Carrots and Tomatoes are found in the wild or purchased at the General Goods Store.

What dishes do you like to make before embarking on an adventure? Maybe you’ve never cooked in your life and rely on your healers and character ATK buffs to keep you alive; if that’s you, you’re pretty fortunate. We hope this list has provided some insight and given you an idea of the best foods to cook in Genshin Impact!