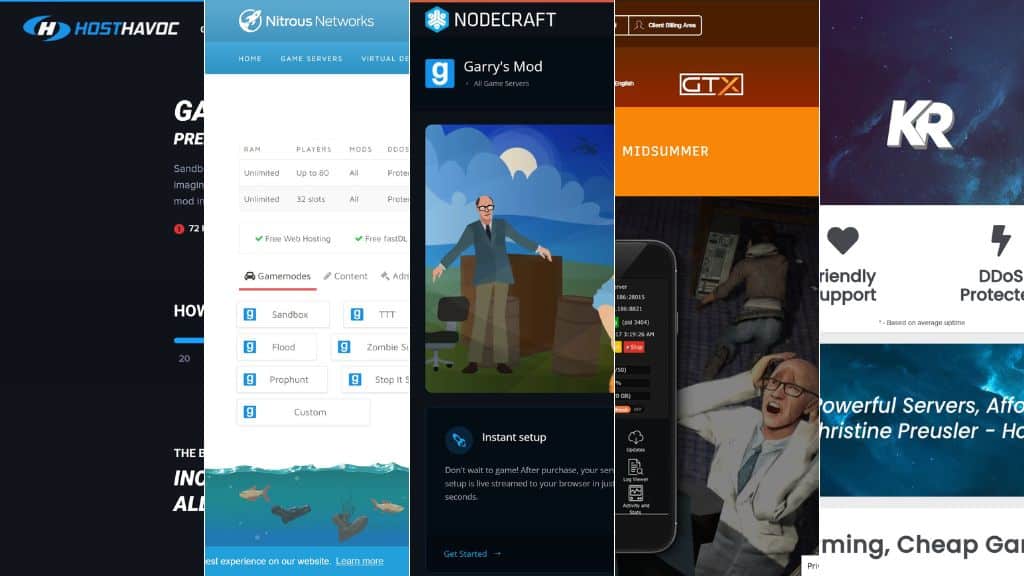 Garry’s Mod started as one man’s passion project and ended up impacting the lives of tens of thousands. It’s one of the most successful creative sandbox games ever made. It has spawned countless mods and games-within-games that people enjoy sixteen years after its stand-alone debut. Want to experience the creative mayhem yourself? Then check out our Garry’s Mod server hosting picks and prepare for an unforgettable time!

It’s true that you could let Steam do the work for you and play through official servers, but that’s not as fun. Running your own ensures your friends have 24/7 access the content they enjoy. Plus, paying for a server also comes with perks like easy updates & content additions, DDoS protection, and professional support if you get stuck. Making heads and tails of all the options out there is a chore, so we’ve narrowed the list of best GMod hosting options down to more reasonable proportions.

Our Favorite Garry’s Mod Server Hosting Providers at a Glance

We’ve mentioned Host Havoc in several hosting articles already, and it’s a shoo-in for the top spot when it comes to Garry’s mod as well. On top of the promises all servers make, like excellent uptime and DDoS protection, Host Havoc is so confident in its service that you get an unprecedented 72-hour money-back guarantee should you not be satisfied.

Like all GMod server hosting providers, Host Havoc sells player slot allotments. Its only drawback is that the minimum number of slots per server is 20. Fortunately, this amounts to only $10/month at $0.50/slot. Most game modes run best with 32 players, but you can purchase up to 100 slots if you wish.

Setting a server up is straightforward. You just have to specify the slot count and preferred payment plan. Going monthly is the least cost-effective option, so it’s better to prepay for more if you know people will be committed. You gain as much as 15% savings if you opt for an annual sub.

Host Havoc takes care of proper CPU and RAM allocation, so server location is your only other impactful choice. Host Havoc has data centers covering the entirety of North America and Europe as well as some in Australia. Paying for slots is enough for a seamless experience, but you can add $4 extra to ensure your game is always at the top of the CPU priorities list.

Nitrous Networks have been around for over a decade. It’s been steadily gaining the trust of GMod and Minecraft players with easy server setup, one-click mod installations, and instant access to your game once the technicalities are taken care of. It’s also a great alternative to Host Havoc for mid-sized groups since 10 is the minimum slot amount.

The site is more formal than most other Garry’s Mod server hosting providers we’ve seen. It prompts you to create your custom server or use the popular 32-slot option. The latter costs $2.50/month less than on Host Havoc, so it makes more sense to go with Nitrous Networks when hosting grander games.

Access to lots of assets is another of Nitrous Networks’ strong suits. You can use assets provided in Half-Life 2 and its episodes, Team Fortress 2, and Counter-Strike: Source, even if you don’t have these games installed natively. There’s also a list of popular maps & game modes you can have up and running in no time.

To set a server up, you’ll need to name it and choose the hosting location. European and American coverage is thorough, but the rest of the world is out of luck. Players from these two regions can save a hefty 20% by going with a yearly plan, but even committing to three months cuts costs somewhat.

GTXGaming is another reputable company with a decade of Garry’s Mod server hosting experience. The first two providers on our list make it a point to simplify your choice of server as much as possible. GTXGaming swings in the opposite direction, providing an unprecedented array of options to craft the kind of server you and your friends will enjoy the most.

Apart from a solid web interface and a MySQL database for script-dependent mods, GTXGaming also offers a sleek mobile interface that lets you monitor and change server settings on the go. Slightly higher costs are a downside to all of this. Still, we feel that paying a little extra is justified for getting excellent service in return.

Like Nitrous Networks, GTXGaming offers 10-100 slots starting at $6.20/month. Payment comes with discounts ranging from 5% for three months to 15% for a year. Unlike with other providers, you can see exactly what kind of hardware your investment gets you and may choose to pay for better options.

The basic package runs GMod from a six-core CPU. It comes with 5GB of memory allocation and 100GB of free storage for maps and assets. You may upgrade these as well as the type of SSD the game is stored on and the priority it gets.

Players worldwide can pretend to be chairs or battle it out on makeshift rafts, thanks to excellent data center coverage. Europe & NA are a given, but GTXGaming also has servers in Brazil, Japan, Singapore, and Australia.

Is Garry’s Mod only one of the multiplayer titles you frequent? In that case, Nodecraft might be a better pick for your hosting needs than all the other recommendations on our list. It has an intriguing save & swap system that backs up the progress on your current server and lets you jump into a different mode or game altogether. Super handy for when you get tired of TikTok and want to give something else a quick go.

Unsurprisingly, Nodecraft’s charming aesthetic is inspired by Minecraft. Outside of GMod server hosting, it provides similar services for more than 25 games. These include old favorites like Left 4 Dead and new arrivals like V Rising. A planner rounds up all the games you’re interested in and presents you with different payment options based on the selection.

There are four plans available for GMod. Instead of slots, they’re all based on the amount of allocated RAM and storage either on SSDs or through cloud backup. It’s easy and tempting to jump in since the first month costs only $6.50. At the time of writing, Nodecraft is having a summer promotional event where you get one month free if you commit to three, which is the best deal we’ve encountered so far.

Opting for the Omega package opens up customization. It only makes sense for large servers since you start with 8GB of RAM and 120GB of total storage space at $40 after the first month.

Nodecraft’s worldwide coverage is excellent. Players in Australia & New Zealand will be particularly pleased since four servers cater to their region. There’s one more in Brazil, Japan, and Singapore.

Our best GMod hosting pick is excellent for sprawling games of Prop Hunt or Murder, but what if you just want to chill or blow stuff up with a couple of close friends? That’s where more nuanced hosting services like G-Portal come in. It’s particularly suited for hesitant buyers since you can pay for a three-day trial to get a better picture before committing further.

Scaling control is G-Portal’s standout feature. You may jump in with as few as three friends during the trial period for $1.56. A month is more expensive than what you’d pay on most servers, but you’ll still save a pretty penny by buying only the slots you’ll actually use. You get to save even more through long-term commitment that culminates in a 20% price reduction for annual subscribers.

The server interface is another noteworthy feature. It’s among the most intuitive yet comprehensive ways of monitoring and configuring your server in the business. You can switch between games & schedule restarts, add packs, and apply new mods with a few clicks. It’s the kind of interface newbies and experienced server hosts can get to grips with equally quickly.

The last provider we’ll be taking a look at is Krypto Networks. They leverage the fact that GMod is an almost two-decade-old game to offer the most competitive prices at the cost of running the game on hardware that’s not state-of-the-art. It won’t matter much unless you load the game up with tons of mods anyway, so this kind of Garry’s Mod server hosting might be just what you need.

Krypton Networks has a barebones site that gets down to business. It currently provides generalized web hosting while supporting GMod and CS:GO. Servers for the former come in three options. The Dev server variant will be most appealing to friend groups since it provides eight slots for only $2.60/month! Paying in advance doesn’t come with benefits, but you’re already saving so much that this won’t be an issue.

There’s not much you can configure during purchase other than how much backup space you’re willing to pay for. All tiers have unlimited RAM allocation, while going with one of the more expensive packages means you can get three or six databases.

As mentioned above, the hardware Krypton Networks uses is a bit old for today’s standards. However, Core i7-7700Ks were at the peak of gaming excellence five years ago, and still have no trouble running games with resource needs as meager as GMod’s. The data center situation is more disappointing since there are only three – two in the US and one in the UK.