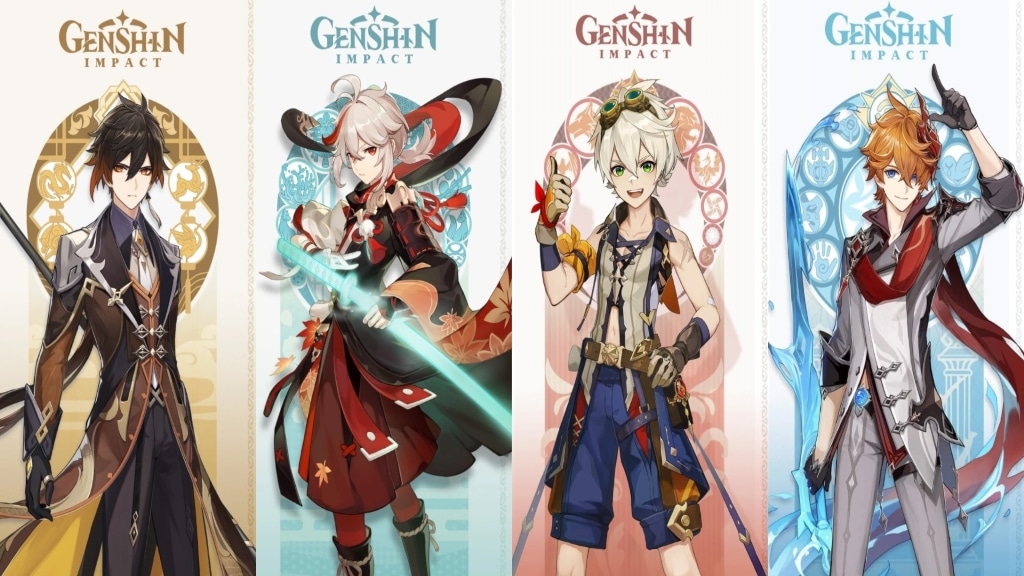 The best part about the open-world fantasy game Genshin Impact is its beautifully designed characters. Many video games with multiple playable characters tend to have difficulty differentiating each character from the other; you end up with a game where everyone looks alike. This is not the case for Genshin Impact.

Currently, there are 47 playable characters in the game, with 32 girls and 16 boys (including Aether). The list below ranks ten of the best Genshin Impact male characters based on their power and popularity.

Gorou is a 4-star Geo bow user whose bravery knows no bounds. He is the reliable General of the Watatsumi Armor and answers to Sangonomiya Kokomi. As a support character, Gorou uses his skills to buff the carry’s DEF and Geo DMG, making him ideal for teams with a Geo carry.

This Geo character is fairly easy to build and doesn’t require a lot of investment. Conveniently, when he reaches C4, he can heal active party members through his Elemental Burst. What else can’t he do?

Next is none other than everyone’s favourite Fatui Harbinger, Tartaglia or Childe. As the Eleventh Fatui Harbinger and the youngest one at that, Tartaglia thrives in dangerous situations and loves thrilling battles. He’s a Hydro 5-star who fights with a bow.

Tartaglia has a unique fighting style because he’s one of the only characters in the game that can switch from Melee to Ranged attacks through his Elemental Skill. His fighting animations are smooth, and he deals tremendous damage in-game.

As a synthetic human created from a powerful Alchemist, Albedo lacks human interaction skills. You can say he’s trying his best to be human. The 5-star Geo character works as the Chief Alchemist of the Knights of Favonius. In battle, he fights with a sword and acts as a support to his teammates.

Albedo was released on December 23, 2020, and he has had one banner rerun since then. His Elemental Skill makes exploring Teyvat a breeze as he can place an elevating Geo construct on the ground. At C0, Albedo shines as a support and a sub-DPS.

Despite being the mortal vessel of the Anemo Archon Barbatos, Venti doesn’t carry himself as you’d expect a high deity would. Venti’s a tone-deaf free-spirited bard who spends his days drunk on wine. However, in battle, he’s a powerful 5-star Anemo bow character with skills that make fighting mobs much easier.

Whether you play Venti as a sub-DPS or support, he can dish out massive damage even at C0. He first became available on September 28, 2020, as the first 5-star introduced in Genshin Impact.

It’s not surprising if the rambunctious crimson oni Arataki Itto picked a fight with a group of kids in any child’s game. Itto is a playable 5-star Geo character that wields a massive Claymore. He’s best played as the main DPS in any party, especially in one with multiple Geo characters.

The Arataki Gang leader has a high Base CRIT Rate and an Elemental Skill that taunts enemies, making him ideal as a team’s main damage dealer. Itto first came out on December 14, 2021, on the Event Banner Oni’s Royale. He hasn’t had any banner reruns and won’t have one any time soon.

Xiao, or Alatus, is the silent protector of Liyue commissioned by Morax to fend off evil spirits that plagued the city. The powerful adeptus is a playable Anemo 5-star character that fights with a polearm. Xiao’s playstyle involves rapid up and down motion that can nauseate some players.

If the Traveler is in need, you can expect Xiao to be there in a heartbeat. No one truly knows what the mysterious adeptus does in his free time, but it’s safe to say that you’ll never find him hanging around crowded areas. Xiao is a powerful main DPS on-field that relies heavily on close-range attacks.

Xingqui is an irreplaceable 4-star Hydro sword character that sits high up in the leaderboards at C6. Since he’s a 4-star with multiple methods of bringing home, it’s not difficult to get him to his highest constellation. The young man has a chivalrous heart and comes from a dignified family. He enjoys reading books and spending time with his best friend Chongyun.

Xingqui has a high ATK speed, an Elemental Skill that reduces DMG, and an Elemental Burst that applies Hydro. He excels in teams with Pyro carries like Hu Tao, Diluc, and Klee. His main role in battle is a sub-DPS that constantly sets up Hydro reactions for his carries. If you haven’t built your Xingqui yet, this is your cue to get farming!

Although Bennet thinks he only brings misfortune to those around him, he’s arguable the most powerful 4-star support character that buffs, heals, and deals damage. When Bennet was a baby, he was discovered by an elderly Mondstadt Adventurer. Benny founded Benny’s Adventurer’s Guild but stands as the sole member.

Like Xingqui, it is more convenient and easier to get Constellations for the young adventurer. Bennet is a powerful support character because all of his skills are useful in any team setting. As a versatile support character, Bennet brings more fortune than he thinks he does.

When Kazuha first came out, many Travelers didn’t think he’d be a powerful character and skipped his banner. Sadly, they were wrong. The wandering samurai consistently stays on the top of the leaderboards for his powerful yeeting abilities and damage focused on Elemental Reactions.

Kazuha is a gentle samurai who loves poetry, wields an Anemo vision, and fights with a sword. Before joining The Crux, he dedicated his life to the well known Kaedehara Clan. As a sub-DPS or support, Kazuha proves that he’s an invaluable unit.

Even if the 5-star Zhongli gets his skills nerfed and moves down the leaderboard, he’ll probably not lose his position as the best in many Genshin Impact players’ hearts. Zhongli has a Geo vision and wields a polearm. In battle, he utilises his skills to support his teammates.

Although he works as the consultant for the Wangsheng Funeral Parlor, Zhongli’s also the current mortal vessel of the Geo Archon, Morax. Zhongli has a powerful shield that can withstand almost all enemy attacks. His Elemental Burst has a large AoE and even petrifies enemies. There’s nothing to hate about the Geo Archon- he’s the perfect package and one of the best Genshin boys!

Any Genshin character ranking articles are always under a lot of scrutinies. It’s hard to conform to one list as multiple factors are involved, and new updates tend to change these lists. What do you think of our ten best Genshin Impact male characters? Do you agree or think a character deserves to be higher up? Let us know down in the comments below!