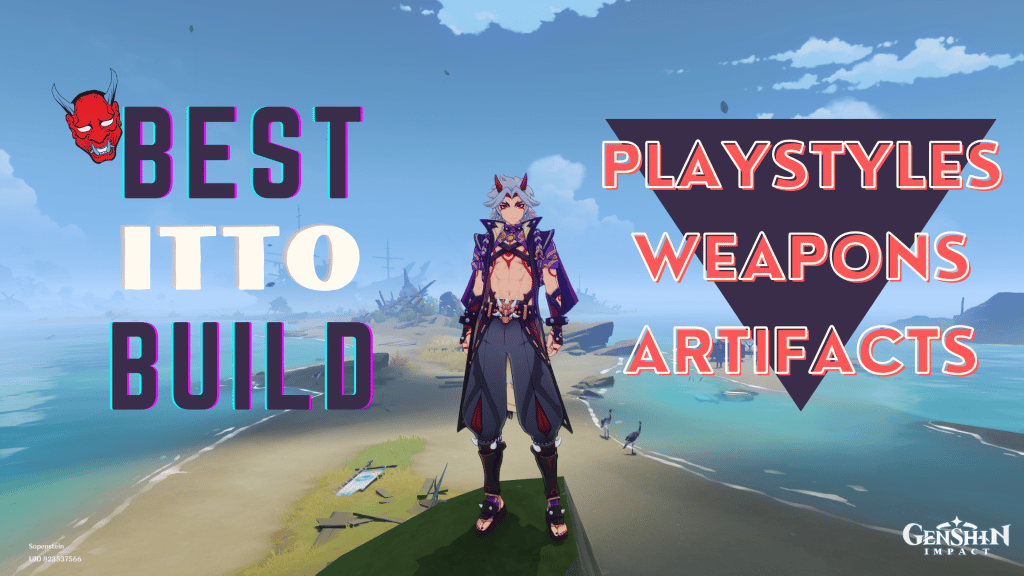 If you haven’t already played the First and the Greatest Head of the Arataki Gang’s quest, now’s the time. We don’t want to spoil the quest, but let’s just say you’ll see another eye candy oni (demon in English) apart from Itto.

Whether you’re still pulling or already pulled for the beefy demon himself, keep reading. We’ll break down all of his skills, combos, talents, and more in this best Itto build.

Unlike the majority of the other playable Geo characters in Genshin who are played as supports, Arataki Itto is played as a main DPS. Although his playstyle and combinations can be pretty confusing at first, he’ll be leaving behind crazy numbers on your screen when played correctly.

You’ll need to keep Itto on the field to carry out his continuous combinations that deal more damage when properly stacked. To start, his Normal Attack: Fight Club Legend performs up to four consecutive strikes. Whenever the 2nd and 4th attacks hit an opponent, Itto gains one or two stacks of Superlative Superstrength. The maximum number of stacks is five.

We know what you might be thinking. What are the Superlative Superstrength stacks for? Well, they’re consumed when Itto does a Charged Attack. Basically, when you press down to perform a Charged Attack, Itto does a flurry of slashes that don’t consume any Stamina but instead remove one stack of Superlative Strength. When there are no stacks left, Itto delivers one final powerful slash to his enemies.

The crimson oni’s Elemental Skill, Masatsu Zetsugi: Akaushi Burst summons a bull into the battlefield that deals Geo DMG to opponents it hits. Whenever Ushi hits an opponent, Itto gets one stack of Superlative Strength. He can only get one stack in every 2 seconds. The young bull stays on the field until his health drops to zero, all the while taunting the surrounding enemies’ attacks. When Ushi leaves the field, Itto gains another stack of Superlative Superstrength.

Next, his Elemental Burst, Royal Descent: Behold, Itto the Evil immensely buffs Itto by converting his Normal, Charged, and Plunging ATKs to Geo DMG. In addition, Itto’s Burst increases his ATK Bonus based on his DEF. He also gets a stack of Superlative Superstrength on every 1st and 3rd strike. This means that when his Elemental Burst is up, Itto will receive a stack of Superlative Strength on every hit, taking into consideration he gets a stack on every 2nd and 4th Normal Attack.

Your main priority to maximize the Arataki Gang Leader’s damage is stacking his Superlative Superstrength. With that said, there are many combinations one can do with this Geo DPS, but here’s a relatively simple one to follow.

A simple rotation for an Itto team composition typically goes like this:

The current weapon banner features Arataki Itto’s signature weapon, the 5-star Redhorn Stonethresher. This weapon increases DEF by 28% and increases Normal and Charged Attack DMG by 40% of DEF. At level 90, the Claymore has 88.2% CRIT DMG. Undoubtedly, this is the optimal and best weapon for the crimson oni.

However, not everyone has enough primos to pull on both the character and weapon banner. A great weapon alternative to the Redhorn Stonethresher is the Battle Pass’ 4-star Serpent Spine. At level 90, this Claymore increases the bearer’s CRIT Rate by 27.6%. In addition, it also has an effect that increases the user’s DMG.

The final Claymore worth mentioning is ideal for fully F2P players. The Whiteblind has a DEF substat and has an effect where Normal and Charged Attacks increase the bearer’s ATK and DEF by 6%.

If you recently wished for the Alchemist Albedo and still farming the artifact set Husk of Opulent Dreams, expect to farm this domain a bit longer. This set is currently also the best artifacts for Itto. A 2-piece set increases the user’s DEF by 30%, while a 4-piece set increases the DEF and Geo DMG of the character through a stacking effect called Curiosity. Overall, this effect can stack up to four times, giving 24% DEF and Geo DMG Bonus.

Popular Genshin Youtubers like Zy0x, IWinToLoseGaming, and Gacha Gamer all say that by far, the Husk of Opulent Dreams is the best artifact set for the crimson oni.

Other artifact options to consider are the Retracing Bolide that increases the user’s Normal and Charged Attacks by 40% and the Archaic Petra for the 15% Geo DMG Bonus.

For the main stats, this is what to aim for. Go for a DEF Sands, Geo DMG Bonus Goblet, and a CRIT DMG or CRIT Rate Circlet. For the substats, get CRIT DMG, CRIT Rate, DEF%, Energy Recharge, and ATK%.

Itto requires around 120 to 140 ER to be able to execute his Elemental Bursts enough times to deal damage. This is why it’s essential to run him with battery characters like Raiden Shogun or other Geo characters that will create particles for him.

What do you think of Itto’s oonga boonga playstyle? Not everyone enjoys slamming a heavy club like a mad man. If that’s your cup of tea, we wish you all the best in your wishes and hope this best Itto build gave you an idea of what direction to take for your 5-star!