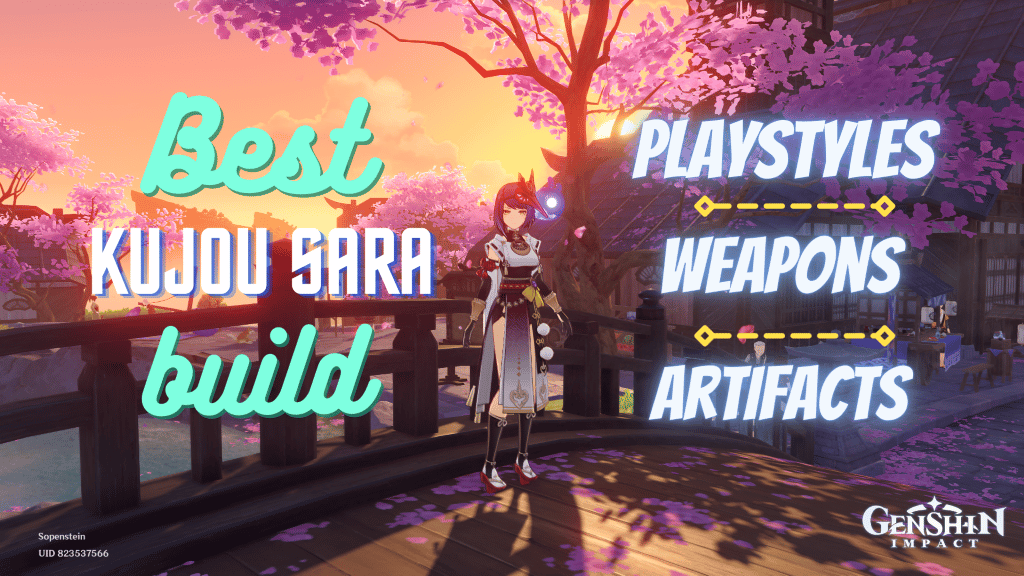 What is the best build for Kujou Sara and who is she? The new wish banner, Reign of Serenity, that came out in the latest Genshin Impact 2.1 update blessed players with two new Electro characters to try their gacha luck on. You have the 5-star polearm Electro Archon, Raiden Shogun, and the 4-star Electro bow user, Kujou Sara.

If you’re currently hoping to bring Kujou Sara home, you’ve come to the right place. The 4-star Electro support or burst support bow user is vital in any team composition and comes with a flexible kit. Through her Elemental Skill and Burst, she can buff your character’s attack, similar to Bennet’s abilities.

Since Sara’s skillset and build can be confusing for some players, we at WhatIfGaming want to make your gaming experience easier. So, we went ahead and compiled numerous builds to give you the best Kujou Sara build in the block!

In Zy0x complete Kujou Sara build, he shares an in-depth explanation of her talents, playstyles, weapons, and artifacts with us. Sara is an Electro burst support or sub DPS. Her kit gives your team an attack buff through her Elemental Skill and Burst.

Since Sara’s skills are not straightforward like other support characters, it can be confusing to build her to completely harness her capabilities. For starters, let’s break down her talents and playstyles as explained in Zy0x’s best Kujou Sara build.

Her Elemental Skill, Tengu Stormcall, is made up of a few parts. Once activated, Sara first swiftly retreats and gains the protection of the Crowfeather. The Crowfeather protection lasts for 18 seconds, and it infuses her next charged attack with Tengu Juurai.

Basically, under Tengu Juurai, the aimed shots Sara fires to enemies or the ground explodes and buffs the active characters within the AoE an ATK Bonus based on Sara’s Base ATK. Tengu Juurai also deals Electro damage.

This attack buff is what makes the adopted daughter of the Kujou Clan essential in team compositions. Since the ATK buff scales off her Base ATK, it is imperative to have a high Base ATK. A character’s Base ATK only comes from two sources: the character’s ATK that increases when leveled and the equipped weapon’s Base ATK.

Sara’s Elemental Burst has a 20-second cooldown and costs 80 energy to activate. This is why it’s crucial to build her properly and pair her with energy replenisher characters so that you can spam her skills.

The optimal rotation for a Kujou Sara team composition typically goes like this:

1). Use Sara’s Elemental Skill (E) to retreat and then fire a charged shot to activate the ATK buff.

2). Switch to your DPS and attack while under the ATK buff.

3). Use Sara’s Elemental Burst (Q) and swap out to your DPS characters to deal more damage.

As mentioned in the previous section, the Tengu Sara’s Base ATK can only increase through her character level and equipped weapon’s Base ATK. So what weapons offer a high Base ATK while still providing other beneficial substats?

The best 5-star weapon that utilizes Sara’s ATK buff is the Skyward Harp. The high Base ATK and Crit Rate substat work wonders for the Crowfeather Kaburaya. Since Sara is mainly used as an ATK buffer, the 674 Base ATK at level 90 will increase your DPS’s ATK far more than other weapons can.

For 4-star weapons, you can go for the Sacrificial Bow and Favonius Warbow. Zy0x favors the Sacrificial Bow more because of the higher Base ATK it gives. On the other hand, if you don’t have this bow lying around in your inventory or you already have it equipped on another character, you can use the Favonius Warbow on Sara. This bow has the chance to generate Elemental Particles, which restores 6 Energy for a character.

The best Kujou Sara build is not complete without artifacts that match her skill set. Zy0x explains in his Sara video that the best artifacts on her are the 4-piece Noblesse Oblige or the 4-piece Emblem of Severed Fate, depending on how you plan to build her and the weapons she has equipped.

The Noblesse Oblige artifact set is optimized for Kujou Sara support builds thanks to the Elemental Burst DMG and ATK buff it gives. On the other hand, if you already have multiple support characters equipped with a 4-piece Noblesse Oblige, you can opt for the 4-piece Emblem of Severed Fate set, which focuses more on Energy Recharge buffs.

Here’s a detailed breakdown of what substats to look for in a 4-piece Noblesse Oblige set and 4-piece Emblem of Severed Fate. Luckily, the main stats you should be farming for is the same for both sets.

For the main stats of the other pieces, here’s what you should be farming. Get an Energy Recharge or ATK Sands. If you already have enough Energy Recharge in your team to be able to spam Sara’s skills, opt for an ATK Sands for higher damage output.

The weapon you have equipped on Sara will also affect if you should go for an ATK or Energy Recharge Sands. If you’re running a Sacrificial Bow on her, it would be better to go for an ATK sands and vice versa for weapons with higher ATK.

For the other two pieces, get an Electro DMG Bonus goblet and a CRIT Rate circlet.

Some of the best characters to have in a Kujou Sara team is none other than the Almighty Shogun. If you were lucky enough to bring her home, check out our Raiden Shogun build as well. We also have a detailed weapon guide tailored for F2P Kamisato Ayaka players.

The best Kujou Sara build will depend on the characters you plan to use with her and your weapon of choice. Don’t forget to keep these things in mind before farming for artifacts! And, if you happen to get tired of testing your RNG artifact luck, take a break and bask in Genshin’s scenery.

With Sangonomiya Kokomi just around the corner, Genshin players are excited for a new 5-star character to explore and fight enemies with. Stay tuned for our complete build on the graceful leader of the Sangonomiya Resistance.