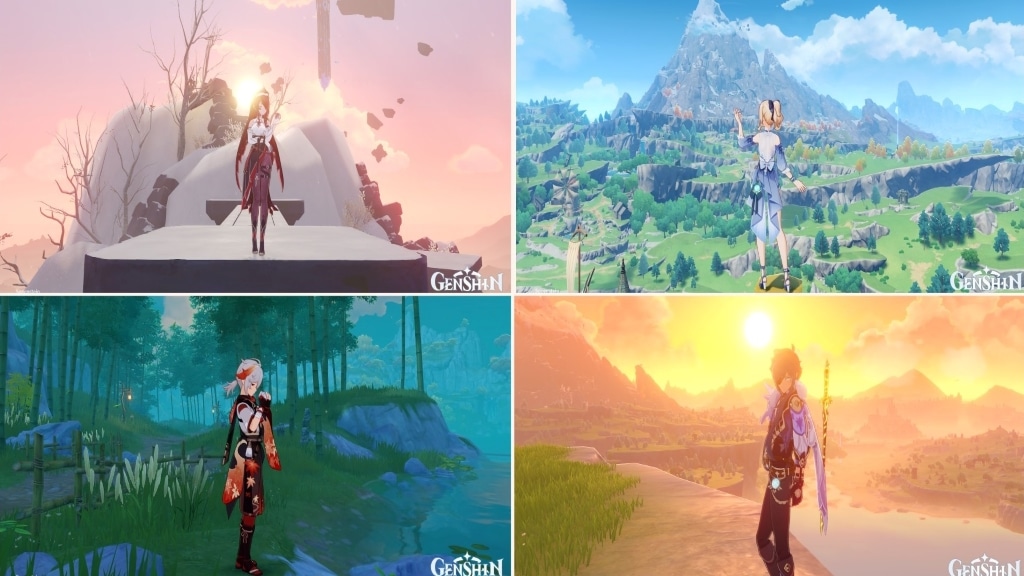 Since its release in September of 2020, Genshin Impact continues to captivate the hearts of players worldwide. The beauty of this action role-playing game is that players of all ages and gacha level addictions can enjoy the game at their own pace. You’ll find hardcore individuals who calculate all damage output down to the last number and casual players who embrace the spirit of adventure by immersing themselves in the game’s lore, music, and scenery.

What kind of player are you? If you’re the type who likes to take long breaks from the never-ending cycle of artifact grinding by enjoying the breathtaking views in Genshin Impact, you’ve come to the right place. The stunning scenery of this game never fails to impress- unless you’re playing on your smartphone on the lowest settings. Here are the best views in Genshin Impact found in Mondstadt, Liyue, and Inazuma!

To kickstart our list for the best locations in Gneshin Impact is none other than the Raiden Shogun’s residence. This magnificent castle greatly resembles Osaka Castle, a famous tourist attraction in Osaka, Japan that was built during the 1500s.

You’ll find this castle in the southern half of Inzauma City. Apart from being the Raiden Shogun’s dwelling, it also serves as the headquarters for the Tenryou Commission, where the Tengu Kujou Sara pledges her allegiance to.

The weekly La Signora Boss domain is located in the highest peak of the Tenshukaku.

This beautiful castle is found in the lovely City of Mondstadt. To reach this spot, climb the top of the waypoint tower close to the Favonius Cathedral. Here, you’ll get a clear view of the whole city and its surrounding areas! Each direction has a breathtaking view that particularly shines during sunset.

On top of the tower, you’ll get an overlooking view of Mondstadt’s Favonius Cathedral, used in worshipping the Anemo Archon. If you’ve ever traveled to Germany’s Cologne Cathedral, you’ll see the resembles between these two cathedrals.

Do you want to visit an island filled with floating jellyfishes, bubblegum coloured scenery, and towering waterfalls? Watatsumi Island has all of that plus a Shrine that looks like it came right out of a fairy tale.

Sangonomiya Shrine sits in the centre of Watatsumi Island. It is the headquarters of the resistance army led by the Divine Priestess Sangonomiya Kokomi. The base is stunning and perfectly embodies the 5-star character’s aesthetics.

If you haven’t opened the island yet, now’s the time!

Peak of Skyfrost Nail in Dragonspine

Genshin players first got a taste of hardship when Dragonspine was added in the 1.2 patch. The mountainous region plagued by relentless snowstorms was a force to be reckoned with, especially for new players. However, some of the most scenic views are found in these ice-kissed lands.

Travel to the top of Skyfrost Nail and breathe in the frigid air while enjoying the calming Dragonspine music. The view from up there is fantastic and makes the climb worth it!

Qingyun Peak’s the Dwelling in the Clouds

Home to the adeptus Moon Carver, Qingyun Peak is a magnificent area brimming with energy. The music that plays while you explore this area embodies the elegance and exquisiteness of Qingyun Peak. After completing the Three Cranes Puzzle, you’ll be able to reach the Dwelling in the Clouds, a floating island surrounded by clouds.

First-timers to the Dwelling in the Clouds get to open two precious chests and one luxurious chest. A four-seater gazebo sits on this floating island. Sit down on one of the seats and unwind. The overlooking view is breathtaking during the Golden Hour!

An eternal night, glowing flowers, and a starry sky- Chinju Forest is a magical spot on Narukami Island. According to the official Genshin Impact Wiki, the sun never sets on this unique area. For what reason? No one knows until this day.

Take a break and unwind in Chinju Forest. As you enter the flowery fields, you’ll change from a ruthless traveller to a protagonist in a Ghibli movie.

Care for some wine? Travel to the southwest regions of Mondstadt to the two-story estate called Dawn Winery to enjoy a cup of their special Dandelion Wine. This manor is rich in culture and currently owned by Diluc Ragnvindr, a 5-star playable Pryo character.

Outside the Dawn Winery, you’ll see numerous grapevines surrounding the area. The manor looks the most magical at night when its lights are turned on, and crystal butterflies are frolicking around.

Another gorgeous spot in Mondstadt is found in Galesong Hill, and it goes by the name Cape Oath. This location is a steep hill that overlooks the City of Mondstadt on one side and the vast ocean on the other. The peak is the perfect spot to watch the sunrise and sunset hand-in-hand with your loved one.

When the God of Eternity ruthlessly delivered the final blow slaughtering the Orobashi, a dragon-like serpent God, a gorge emerged in the aftermath. When you travel to Yashiori Island’s Serpent’s Head, you’ll see the skull of the mighty Orobashi.

The view from below and above the skull is spectacular and worth the visit. If you need to farm Crystal Marrow for a character, you’ll find numerous pieces scattered on and around the skull as well.

If you’ve ever been to Kyoto’s highly acclaimed Fushimi Inari Taisha, a shrine filled with cascading Torii gates, you’ll definitely see its similarities with Narukami Island’s Grand Narukami Shrine. The entrance to this divine abode run by Yae Miko transports you to a whole other world. Try taking pictures here during sunset; you won’t regret it!

Liyue is a bustling port city that is home to the largest market harbour.

The next location is found Inazuma’s Amakumo Peak. Travellers are forced to traverse this perilous land during a quest to open the world boss, Thunder Manifestation.

There are numerous puzzles to be done on this purple-lit island that it might take a few days to complete, especially if you get dizzy from the flashing purple lights and need to take breaks every few minutes.

Journey back in time at the antiquated amphitheatre called the Thousand Winds Temple. This formation of multiple ruins sits in Starfell Valley, Mondstadt. The archaic temple resembles Roman arenas like the Colosseum.

It is said that the temple was constructed as a divine sanctuary to worship Barbatos, the Anemo Archon, and a place to seek protection from perilous storms.

Qingce Village is a quiet town situated in Bishui Plain, Liyue. The serene village is adorned with cascading fields of orange and yellow flowers. Only a few people reside in the peaceful town, and most spend their days enjoying a simple life. While you walk along the terraced plains, you’ll feel all your worries slipping away. Pick a few Glaze Lillies while you’re at it.

Luhua Pool is an ancient garden found in Qiongji Estuary, Liyue. The cascading terraces are filled with crystal clear water. The bright colors of this region are one of the things that make it stand out.

The clear blue waters against the red and orange trees are pleasing to the eyes. If you take a stroll along the terraces of water, you might find some interesting items along the way!

What do you think is the best view in Genshin Impact? Comment down below your favourite! We hope you enjoyed reading about the best views in the game, and stay tuned for more locations as soon as new regions are introduced!

Here’s a tip: play the Genshin Impact OST while reading this article. Trust us; it’s a whole new experience!