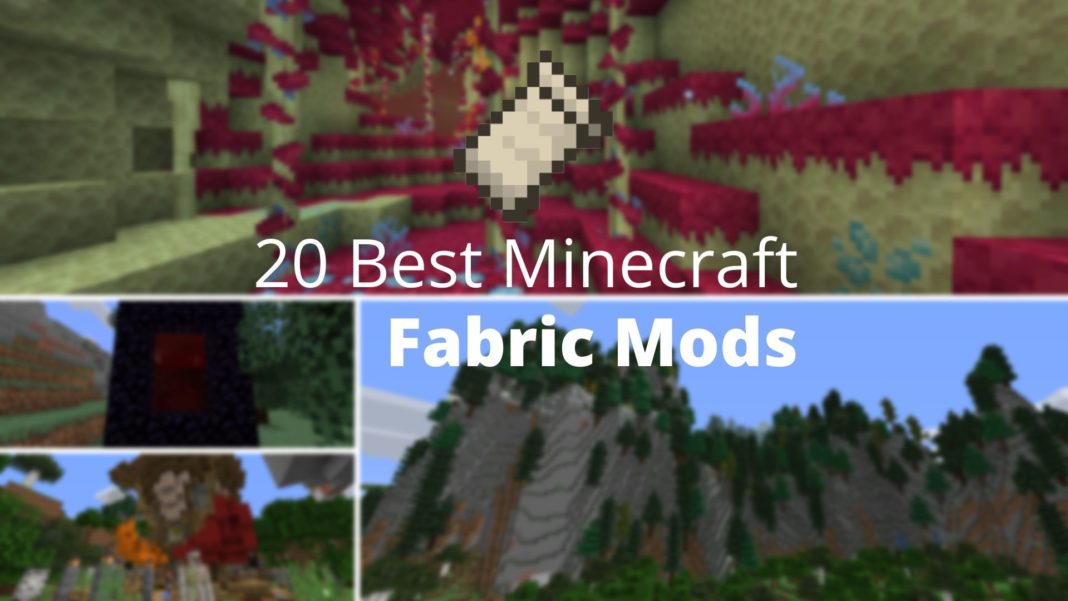 Fabric is a lightweight mod loader for Minecraft that was first introduced to the public in 2018. Since then, it has become a serious competitor to Minecraft Forge (If you want to know more about the difference between Fabric and Forge, click here). And throughout those two years, we have seen some fantastic Minecraft Fabric mods added that make Forge players jealous.

So in this blog post, we’ll list 20 fantastic Minecraft Fabric mods I think every Minecraft player should try at least once. I’ll link to any forge ports if one exists. So if that interests you, then keep on reading.

Last year, we got an update to the nether that completely changed the underworld forever. In comparison, End has become quite stale.

But it doesn’t have to be this way! With Better End installed, you’ll find a more colourful and exciting world! There are a total of 24 new biomes added, like Chorus Forests and Foggy Mushroomland. Additionally, there are new mobs, tools, food, armor, and weapons.

So if you’re looking to spice up your world, this mod is a must.

Biome makeover is a Minecraft Fabric mod that wants to improve the biomes in Minecraft. This mod has currently reworked four biomes: Mushroom Fields, the Badlands, Swamps and Dark Forest.

In those reworked biomes, you’ll find new foliage, mobs, items, blocks and armor. They even did a complete overhaul of the woodland mansion.

So if you want to make the vanilla biomes more appealing and unique, I highly recommend you check this mod out.

Is your Minecraft house a bit bland inside? If so, then you could create vanilla furniture or install Adorn. From all the Minecraft Fabric mods that add furniture, Adorn is the best one! That’s due to almost every piece of furniture having a function.

For example, the sofas in this mod have two features: one is to sit and the other one is that you can sleep in them. You also have shelves to store items, tables you can sit on, and even trading posts to sell items.

P.S Your Minecraft house needs to look good both inside and outside! So if you need any building ideas, click here.

Apart from Biomes O’ Plenty, there isn’t a biome mod more popular. This mod adds a lot to your Minecraft world.

There are over 80 new biomes across all three dimensions – Overworld, Nether, and the End. Plus, you’ll get more than 200 unique blocks and items, including new ores, armours, and tools.

So if you’re looking to build an RPG or just to spice up your Minecraft world, then this mod is suitable for you.

In 1.14, we finally got coloured beds! But why not take it a step further? With Bedspreads, you can now add banner designs to your beds, making them even more customisable.

Sodium is a fantastic performance mod for your Minecraft world. The performance numbers are just jawdropping. Some YouTubers have been able to get 1000 FPS from their high-end PCs.

P.S If you play Forge, then you can install OptiFine instead! It won’t give you as great of a boost but will still make a big difference. Click here to learn how to install it.

Immersive Portals is a small but fantastic mod that makes your portal experience that much more incredible.

First, you’ll now instantly load into the other dimension with no loading screens! But that’s not what makes it so cool.

What makes it so remarkable is the ability to see through the portal and what is happening on the other side.

Mo’ Structures is one of the best Minecraft Fabric mods that add structures. You can find many interesting new structures like Villager Markets, Pyramids, and even air balloons floating in the sky.

Speaking of new structures, Repurposed Structures is a mod that gives more variety to the vanilla structures. Now you’ll see villages made out of Birch- and Jungle wood and pillager outposts made out of different materials.

Origins is a mod that basically introduces classes to your game! Once you start up your Minecraft world, you can choose between 10 different origins. Each one gives you special abilities and weaknesses.

For example, there’s Elytrian. As an Elytrian, you have Elytra wings permanently attached to you, plus you can launch yourself into the air every 30 seconds. Cool right? But that comes with a cost. You can only wear light armour (no full netherite armour for you!). Plus, you’ll take more fall damage.

Roughly Enough Items is a simple mod that you want to install if you plan to play with many mods. It works just like Just Enough Items but is made for Fabric. With this installed, you’ll be able to search for any item, including modded items, and see its crafting recipes.

Dynamic Sound Filters is one of the Minecraft Fabric mods that makes the sounds in Minecraft just a bit better. The game now adds effects to the vanilla sounds, depending on where you are.

For example, the sounds have more reverb on caves and nether. Plus, when you’re submerged in water, your sound is muffled.

So if you’re looking to add some immersion to the game, this is a good mod for it.

Not Enough Animations adds some much-needed animations to your game. Now when you’re holding a map in your hand, the animation is seen in the third person. They also include rowing and eating animations. I especially like that there’s an animation of the player holding the reins while riding a horse.

Feudal Weaponry is a mod that adds more weapon varieties to your game. You’ll find medieval weapons like maces, axes, long swords, and many more. Plus, they’ve also added round shields to the game.

This mod doesn’t add any new items to the game! Instead, it helps servers and PCs to run smoother due to reducing RAM usage. It’s handy for those who are looking to play in a highly modded Minecraft or with a mod pack.

Ever been jealous of bedrock players having armour stands with hands in survival? Well, now you can have the same in Java with Mannequins.

Mannequins can be used for two purposes:

First to use it as a way to display your armour and weapons. The poses it can make are highly customisable with its easy to use GUI.

And secondly, you can use it as a test dummy. So you can practise your fighting skills without having a fear of breaking them. If you do want to break a mannequin, hold shift and then you’re able to break it.

Want to make your game a bit more challenging? Why not add a thirst bar to your game. From now on, you need to keep yourself hydrated, or you might die of thirst. But don’t drink any water, as you could get a thirst potion effect. So, purify your water before you drink it.

Not hard enough? Well, why not add Environmentz to your mod list. With this mod installed, you’ll have to dress for the weather as your character will now have side effects like slowness when overheated. So warm yourself by wearing leather-, insulated- or the new cool wolf armour. And keep yourself from overheating by wearing no armour at all.

Did you play Minecraft Story Mode? It had some cool armour designs there, didn’t it? Well, now you can wear them in Minecraft! These armours cannot be crafted but can be found on chests in temples and mineshafts, giving you a reason to explore the world.

We know how sad it is when the game informs you about the passing of your dog. So why not protect them by equipping them with armour? With Wolves with Armor, you can suit your best friend with all five tiers of armor, including netherite armor. It will give your four-legged friend the same protection as horse armor.

As a bonus for sticking around for so long, I wanted to give you another mod suggestion for Fabric. This mod is called Better Dropped Items, and it changes how dropped items look. Instead of floating around, the items will lie on the ground.

And that’s it! These are the best Minecraft fabric mods that I love to use. Which one is your favourite mod? Are there any I should have mentioned as well?

Comment down below! In my opinion, the most fantastic mod must be the Better End mod. It changes the look of the end, making me desire to go there, even more, just to see its beautiful landscapes!

Battlefield 2042 Trophy List is Down To Get Your Boots Dirty

Is Call of Duty Vanguard Cross Platform? Everything you need to know

GTA Trilogy File Size for each game revealed for Xbox