Best Minecraft Light Sources You Can Use Anywhere 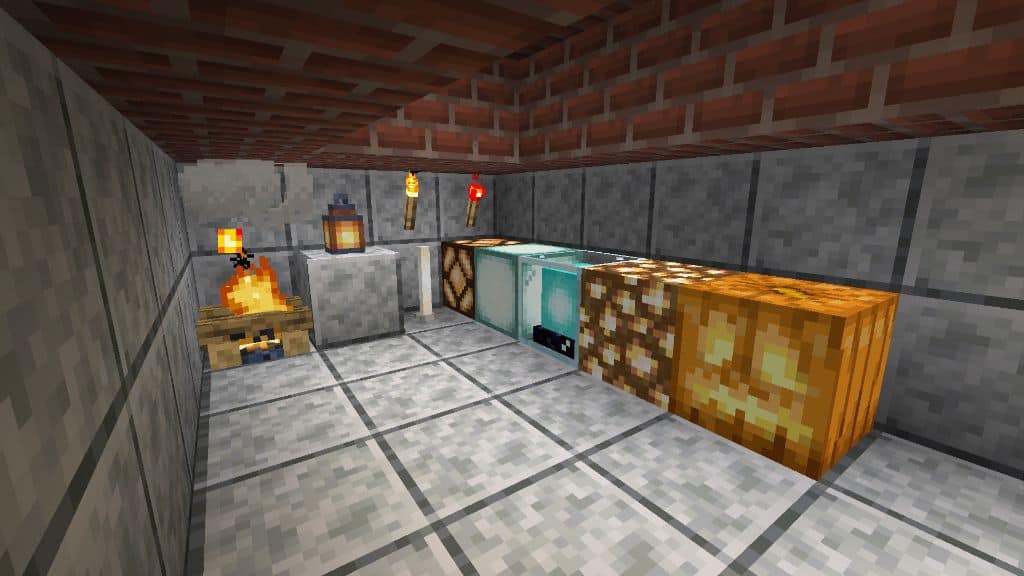 Did you know there are almost 60 Minecraft light sources in the game?

Since the game’s inception, light has helped Minecraft players traverse through underground tunnels and brighten up home turfs.

While you may already be familiar with the ever-handy torch, seasoned Minecraft players light up their bases with more impressive light technology.

Don those shades. This Minecraft Light source guide is coming in piping hot.

Before we start, let’s understand how Minecraft lighting works at the basic level.

Light comes from two sources, either the sun or blocks. Certain light-filtering blocks like leaves, cobwebs, and ice allow light to pass through them, but they don’t emit light themselves.

So we won’t cover them.

Instead, we’ll touch on light-emitting blocks for this guide. These light blocks can fall in a range of 15 levels — with the 15th level spanning the widest possible range for light, while the lower levels decrease in light intensity.

Want a snazzier, brighter, and thousand-times cooler alternative to the run-of-the-mill torch? The lantern is the item you’d want.

Lanterns are one of the most recent light sources in Minecraft — released during the major Bedrock edition 1.9.0 update.

Just like torches, you can hang these bad boys on walls and fences. This item also features a Light Level of 15, making it one of the brightest blocks you can find in the game.

Making a lantern is simple. On a crafting table, place one torch at the center of the table, and surround it with eight iron ingots on all sides. You’ll get yourself one lantern for your efforts.

Fun fact: Did you know lanterns could’ve been in the game in 2011, but it didn’t push through? A negative response towards lanterns forced Notch to reconsider releasing it, and he chose to postpone its release instead.

Picture this: The nightly threats of mobs and monsters approach you. You look inside your sparse inventory, desperate for anything useful.

With wood and coal, you come up with the bright idea to make a torch. Crafting table in tow, you get to work. But then, you realize something.

You’re strapped thin with barely any resources to cook your meat. You’re at half a heart, and you’d need something to ward the monsters away, fast.

If you find yourself in a similar situation, the campfire is the light source to save you. Aside from being craftable and extremely bright (Level 15), the campfire block also naturally spawns in taiga or snowy taiga villages.

To craft it, you’d need a crafting table. Position these items the following way:

Another cool perk about the campfire is its ability to send smoke signals 10 blocks in the air. Put down a hay bale underneath it, and you can just smoke 24 blocks instead. Since the campfire doesn’t extinguish when drenched in rain, it’s a fantastic compass marker to find your place back home!

An alternative campfire is the soul campfire (Level 10 Light), which emits a ghastly blue flame instead of an orange-colored one.

Jack O’ Lanterns are spooky Pumpkin blocks that can be found in taiga and snowy taiga villages.

These blocks are easy to craft. You only need a regular pumpkin and a torch below it to create this Level 15 luminance block.

Aside from absolutely demolishing the ye-old-Minecraft Spookiest Block Contest (that I totally didn’t just come up with), the Jack O’Lantern also breathes life the to iron and snow golems, being their heads.

With this block, you can also amass your own horde of subservient creatures to bring with you to The End! Mwahahaha!!! — er, hmm, ehem.

Glowstone is a stone imbued with a mysterious force that makes it — wait for it — glow. It’s also a Level 15 luminance block, making it one of the brightest Minecraft light sources in the game.

While you can find this block scattered around the Nether, you can also craft this block for yourself. All you need is 4 Glowstone Dust, which you can obtain by breaking a Glowstone block in the Nether.

If you want to make things easier for yourself, break a Glowstone with a tool with Silk Touch properties. This will drop the Glowstone block instead of the Glowstone dust.

You can also use Glowstones to transmit Red Stone signals to different objects. Plus, this 2×2 block is 100% fireproof. Neat.

Speaking of fireproof, what can get any more fire-resistant than a water-based Minecraft light source?

Sea Pickles are stationary underwater creatures that spawn in ocean biomes. The number of sea pickles in a block is equivalent to the strength of the light source.

If you have a block with less than four Sea Pickles, you can feed the block Bone Meal to increase the odds of it spawning more of its kind.

Do note, Sea Pickles can only emit light underwater. While you can put these animals in potted plants (where they don’t suffocate for some reason), you won’t gain any light from them on the surface.

If you know your way around Redstone, the Redstone lamp could be right up your alley. These blocks function similar to the Glowstones — the only difference is you need a Redstone mechanism to activate it, like a lever, a button, or a Redstone Torch.

These blocks are Level 15 when lit, and Level 0 when unlit. For home bases and fortresses, this block can be the perfect substitute for indoor lighting thanks to its true-to-life mechanism.

Here’s how to make it: in the exact NSEW quadrants of a crafting table, put down four Redstone Dust. At the center, place a Glowstone block. Then voila, you got your hands on a Redstone lamp.

Once you get your Redstone Lamp contraption to work, don’t hesitate to draw some inspiration with some great Minecraft base ideas ready to make magic happen.

Say hello to the ocean floor’s Glowstone. The Sea Lantern is a light-emitting block that spawns in Ocean Monuments and Underwater Ruins. It’s one of the brightest Minecraft light sources in the game, with a luminance of Level 15.

Aside from being a Minecraft light source, Sea Lanterns can also be used to activate a Conduit.

The Conduit’s unique exterior is quite the welcoming sight in Minecraft, with a Light Level of 15 in both land and water. It acts similar to an underwater Beacon, providing status boosts through Conduit Power while also attacking hostile mobs underwater.

Crafting the Conduit can be quite a challenge. Not because of its eight Nautilus Shells (which finding still feels like quite the slog), but because of the centerpiece item: The Heart of The Sea.

You can find that item in the form of buried treasure, but its chances to spawn is abysmally low. The best way to find biomes where buried treasure spawns is by finding a dolphin and letting it lead you to the location by feeding it raw salmon or raw cod.

The beacon is a Level 15 Minecraft light source that can project a light beam upwards.

How to make it: You’ll need three obsidian at the bottom-most row, a Nether Star at the center, and five Glass blocks on the remaining squares.

You’ll have to go through long walks and lengths to craft the Beacon, even having to beat the Wither at one point. This makes the beacon quite impractical to just use as a Minecraft light source.

But if you want a cool-looking block that just so happens to have light properties, hey, the Beacon fits the bill to a T.

What else does it do, you ask? By feeding the beacon any of the following items:

The beacon will then allow you to gain five special powers, namely, Speed I, Haste I, Resistance I, Jump I, and Strength I.

If you build your beacon on top of a 4-tiered pyramid, you unlock what is called Secondary Powers. This grants you access to Regeneration I.

The end rod acts similar to the torch, emitting a bright white glow at a Light Level of 14. This luminance is one level lower than the rest of the Minecraft light sources covered above. These non-blocky items are only found around the proximity of End City towers, and they’re positioned in a way for players to climb on top of them.

A cool fact about End Rods is that they don’t break when their supporting block gets destroyed. This makes it a versatile tool for decorating and serving as an untethered Minecraft light source. Alternatively, you can also stick it normally on a wall block or the ground — whichever floats your boat.

To craft it, you’ll need to add one Blaze Rod at the bottom and one Popped Chorus Fruit on top. With one ingredient of each, you’ll produce four End Rods.

Finally, at the end of the list, you find yourself face-to-face with the warm familiarity of your old pal, the Torch.

There isn’t anything new or extravagant about the torch; its enveloping warmth is enough to make anyone feel cozy and nostalgic. The torch sports the same luminance as the End Rod, just one level shy of the best lighting in the game at Level 14.

And, let’s be real. The torch is the most common lighting source in the entire history of Minecraft, ever. You’ve probably already used the Torch countless times whilst trekking on forest canopies and digging through underground caverns and mines.

But for the newer crowd, we got you. To craft it, you’ll need any type of stick at the bottom and one coal on top to get this bad boy up and running. Once you’ve put those items to craft, you’ll end up with four torches, good as new.

We hope that you’ve learned about the various Minecraft light sources.

And hey, why don’t you match your stunning Minecraft base with some equally powerful hardware? Check out our Minecraft Mouse Guide to give you a leg up in transforming your gaming experience into something custom-tailored to bring out the best gamer in you. Or if drag clicking is your thing, check out the best mice for drag clicking

If you’re looking for some pure, unadulterated, borderline-restricted fun, you may want to look at a TNT Minecraft duplication glitch that managed to seep through the developer’s cracks and withstand the test of time. Just don’t tell the devs.