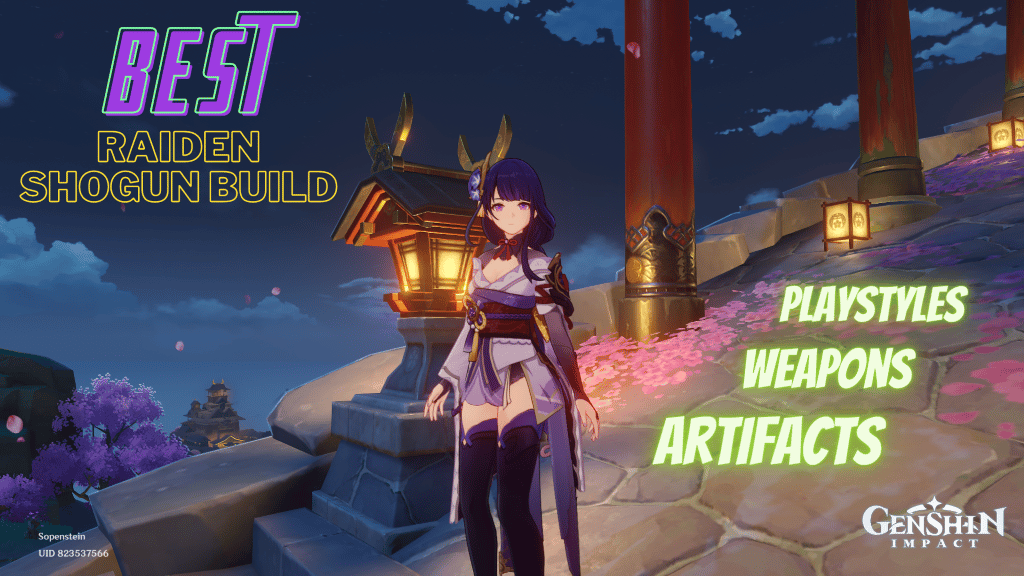 Since the Almighty Raiden Shogun’s banner was released in the Genshin Impact 2.1 update, thousands of Ei wishers are testing their luck to bring her home without top-up. The 5-star polearm Electro Archon character is excellent with support and sub-DPS builds. Although her playstyle can be a bit tricky, Raiden is an irreplaceable character with a versatile skillset.

With the numerous builds discussing the pros and cons of the Electro Archon, it can be confusing what to follow and what build is best given the current characters you have available. We at WhatIfGaming have gone ahead and compiled a complete guide to help your Raiden Shogun shine in any team composition.

The Electro Archon is a great burst support and sub-DPS. On-field, she acts as an energy recharger for your team while dealing damage. To get the most out of the Almighty Shogun, you’ll have to use her abilities alongside your team’s abilities at the right time.

The effect lasts for 25 seconds and provides the whole team with an elemental burst damage bonus. Use this skill at the start of your rotation. In team fights, activate Raiden’s Elemental skill, switch to supports like Beidou and Xingqiu, and then use their Elemental skills.

Next, the Shogun’s Elemental Burst (Q), Secret Art: Musou Shinsetsu, is an attack that initially deals AoE Electro damage. The amount of damage dealt is based on the number of Chakra Desiderata Resolve’s stack is on the field when the skill is activated. Chakra Desiderata’s stacks increase each time another character uses an Elemental Burst skill. Basically, use your other party member’s Elemental Burst first, stack them up, then switch to Shogun and activate her Q.

After activating the Shogun’s Elemental Burst, she enters the Musuo Isshin state, where her normal, charged, and plunging attacks are infused with Electro damage. This is where the Shogun turns into your team’s battery. Each infused attack that hits an opponent regenerates energy for your party members. Make sure to stay on the field throughout the whole skill’s seven seconds duration as swapping out ends the skill.

The optimal rotation for a Raiden Shogun team composition typically goes like this:

The 4-star “The Catch” is arguably the best weapon option for F2P Genshin players. Be prepared for hours of wishing to get this polearm to Refinement 5! At R5, “The Catch” gives 32% Burst Damage and 12% Burst Crit Rate. The substat of this weapon is Energy Recharge.

If you don’t want to lose your sanity fishing for hours, another 4-star polearm great for the Shogun is the Favonius Lance. By now, many players will have this weapon lying around in their inventory, making it an excellent alternative for many players. The Favonius Lance also has Energy Recharge as its substat plus a passive that generates white particles on Crit hits that regenerates six energy for a character.

Advertised as the Electro Archon’s signature weapon, the Engulfing Lighting is the 5-star option for players who don’t mind pulling on the weapon banner and don’t want to catch a total of 138 fish to get “The Catch” to R5. Engulfing Lightning gives the user a lot of Energy Recharge and ATK increase. If you don’t mind trying your luck, this is the best weapon for the Shogun.

IWinToLoseGaming made a comprehensive video discussing “The Catch,” Favonius Lance, and Engulfing Lighting. In the video, he demonstrates the damage output of the three weapons side-by-side. If you’re still unsure what weapon to get, check out his video to help you decide.

According to Zy0x’s complete Raiden Shogun build, the best artifacts to farm for are the 4-piece Emblem of Severed Fate set. A 2-piece Severed Fate set gives you a plus 20% Energy Recharge, perfect for Ei. At the same time, a 4-piece set increases your Elemental Burst damage by 25% of your Energy Recharge for a maximum of 75% bonus damage.

Farming for artifacts is where your luck is put to the ultimate test. The best way to go about deciding what substats you want for your Emblem of Severed Fate set is by considering your team composition and playstyle.

Ultimately, here is what you should look for in your artifacts for Raiden.

The goblet’s main stats you should get are ATK or Electro DMG Bonus. For your circlet, go for CRIT Rate or CRIT DMG, depending on what you need more.

The best build for Raiden Shogun will ultimately depend on what weapon and artifacts you have equipped on her and who she is paired with. Don’t forget to keep these factors in mind when building your Electro Archon.

After spending hours farming for artifacts and collecting ascension materials, maybe you want to take a quick break and go sightseeing or upgrade your teapot! Take some beautiful pictures with your Electro Archon at these beautiful spots or spice up your teapot with these amazing designs.

The best build for your Raiden Shogun ultimately relies on your team’s composition. Make sure to consider what elemental reactions you want to achieve. Above everything else, don’t forget to have fun!