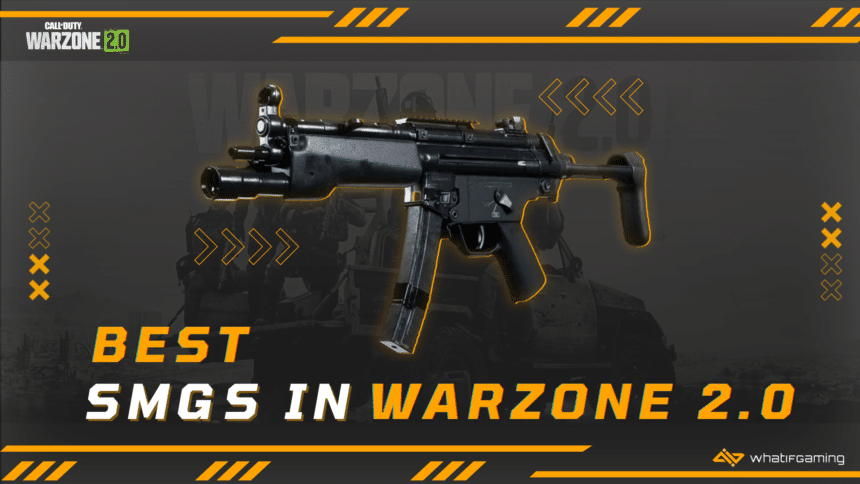 SMGs are fun-to-use weapons that excel in close-range combat. This is mostly due to its high fire rate and good damage output. Plus, if you have good attachments on your SMG, you can even control its recoil. That is why this guide will show you the best SMGs in Warzone 2.0.

Since the game has a good variety of SMGs, it can be a bit overwhelming or confusing for most players to know which ones are worth picking up. Each SMG has its own advantages and disadvantages, so we will show you which weapon you should use. With that said, let’s dive right in!

The best SMG in Warzone 2.0 is the FSS Hurricane. This weapon has tough competition in the shape of the Lachmann Sub, but the FSS has better aim, little recoil, and great damage. The only downside is the slow ADS speed, but that can be improved with a few relevant attachments. If you are fighting someone at close range, there is no way they can out-damage your FSS Hurricane.

The best SMG in Warzone 2.0 is easily the FSS Hurricane. One of the biggest reasons for it to be this good is due to its precise aim. While using this SMG, you will feel almost no recoil which allows you to spray and pray without any hesitation. Combining this with its high damage will result in you getting free eliminations.

The only downside to it is the slow ADS speed, but that can easily be countered by adding a few relevant attachments. Other than that, you won’t notice any problems with it. The best part is that you often won’t need any secondary weapon with it since it works well at medium ranges as well, which is rare for an SMG.

I still suggest that you mostly use it at close range since there are better options like assault rifles or marksmen rifles when it comes to medium range.

Little to no recoil

The Lachmann Sub is an amazing weapon with high damage and a lot of fire rate. It works optimally at close range and has precise accuracy. The best part is that this weapon offers you a lot of mobility due to its lightweight. Combine this with its high damage, and you have got yourself a good SMG that can quickly eliminate the enemy.

However, the major downside to this is that the damage will drastically fall off at the medium range. While this might not sound like a massive problem since SMGs are meant to be used at close range, it can be an issue in certain cases. Other than that, you will have a great time using this weapon.

Due to its high stats, the Lachmann Sub is almost tied with the FSS Hurricane.

When it comes to SMGs, the Fennec 45 is one of my favorites. This is due to its great damage and amazing fire rate. It is one of the best close-range weapons that you will find in Warzone 2.0. However, the recoil control on this weapon isn’t the best, which is the reason it isn’t higher on the list.

If you want to have precise accuracy and reduce the recoil, you will have to use a few relevant attachments. Plus, the damage falls off at medium range, which means that you have to carry a good secondary weapon to cover that.

Damage falls off at medium range

In terms of weapon design, the PDSW-528 has a unique one that looks really cool. This SMG isn’t all show either, it has high bullet velocity and a good magazine capacity. Having high bullet velocity means that you can easily damage armored enemies without a lot of effort.

Plus, having more bullets in your mag will allow you to spray and pray without having to reload frequently. The best part is that the reload speed is also quite decent, which makes it a great SMG. However, the thing holding it back is the slightly low damage.

While ADS speed is also a bit slower than normal, you won’t really notice it in most situations. Having a few good attachments will counter almost all its flaws.

This SMG is great but has a few drawbacks that really hold it back. Let’s start with the positives first, though. The BAS-P has a stable aim which is always a welcomed addition. Thanks to this, you often do not need to use ADS since the recoil is quite minimal as well.

This makes the weapon even more useful at medium-range combat, but I suggest you don’t try to attack enemies that have assault rifles at medium-range. Now, speaking of its drawbacks, the low damage and low fire rate really hurt the weapon overall.

Since this is an SMG, you need to have a high fire rate to win more close-range fights. Luckily, you can use a few good attachments to counter this issue. Since the magazine size is quite decent, you will have a free attachment space that can help you increase the fire rate or the damage.

Moving on to the Vaznev 9K, it has some of the best ADS speeds in the game. Due to that, you can easily get better aim and control your recoil as well. This is especially useful since this SMG has somewhat mediocre recoil by itself. So, to counter that, make sure you use your ADS in most of the fights.

Plus, due to decent damage and a good fire rate, it has a good TTK (time to kill), which makes this SMG better than most. However, the major thing that’s holding it back is the low magazine capacity. You will have to waste an attachment slot to increase it, or you’ll be reloading in crucial situations.

The MX9 is a submachine gun designed with stealth in mind. One of the best attributes of this weapon is that it has subsonic ammunition, which prevents skulls from appearing on the map after you kill someone. This can become the perfect run-and-gun style SMG. It is perfect for close to medium-range gunfights.

The MX9 has very low recoil and great accuracy. It can kill someone with three to four bullets quickly. One of the reasons why this weapon is so down in this list is because it has very little damage as compared to other SMGs.

I’ve seen many players using the Minibak due to its precise aim and good magazine capacity. It has a 64-round magazine which means that you don’t have to reload the weapon all the time. Chances are that your enemy will have to reload their weapon while you will still be firing.

However, the reason why it’s so low on this list is due to its low damage. Since its damage output isn’t the best, it takes a long time to eliminate the other player. However, having precise accuracy means that the recoil isn’t that bad. If you land a few good headshots at close range, there is no way you will lose the fight.

Finally, the last SMG on our list is the VEL 46. While it is last on our list, the VEL is a good weapon that will do you wonders if you find it. It has a swift reload speed that will allow you to quickly prepare for another fight. This might not sound like a lot, but it can help you win more fights while the enemy reloads.

However, the recoil is a massive problem with this SMG. If you are not using any attachments to control the recoil, you will have a tough time dealing with enemies that aren’t too close to you. Plus, the damage falling off at longer ranges can be quite problematic as well.

So, make sure that you only use the VEL 46 if you are planning to fight the enemy in close combat. It also isn’t that useful against armored enemies, but that shouldn’t be a problem thanks to your quick reload speed which makes up for the low damage from a distance.

Those were the best SMGs in Warzone 2.0. If you love to fight at close range, using one of these SMGs will be highly worth it. Which one do you like the most? We would love to hear your thoughts in the comments below!

If you love long-range battles, you can check out our best sniper rifles guide or the best assault rifle one! You can also find the best loadouts for Warzone 2, which will help you gear up for the game.