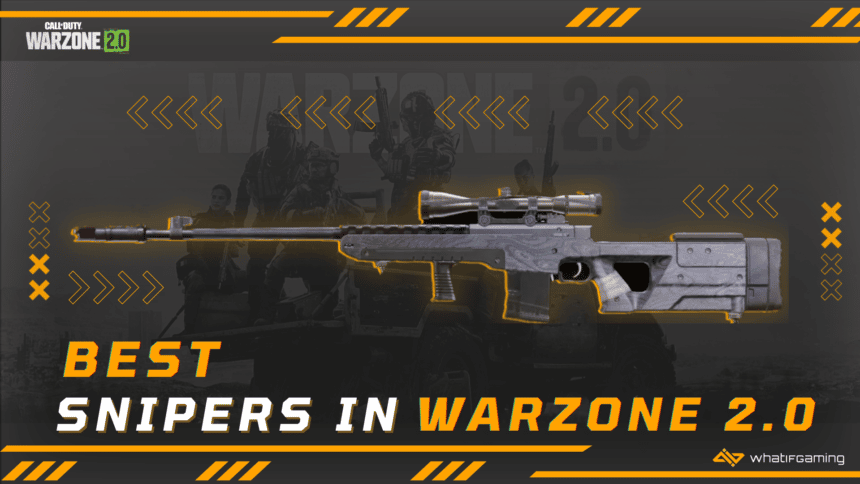 Being a sharpshooter and landing headshots from a long distance feels extremely satisfying and rewarding. Having the ability to stalk your prey from long range and kill them without them ever knowing what happens feels good. That is why this guide will show you the best snipers in Warzone 2.0.

If you love to keep your distance and play it safe, then this guide is just for you. Warzone 2.0 has a good variety of snipers, but which one is the best? Without further ado, let’s dive right in and take a look at the best snipers in Warzone 2.0.

If you want to get your hands on loadouts instead, we’ve got you covered; here’s a list of the best loadouts for Warzone 2.

What Is the Best Sniper in Warzone 2.0?

The best sniper in Warzone 2.0 is the MCPR-300. This is because the gun has proven itself in Modern Warfare 2 and carries its legacy in Warzone 2.0 of dishing out insane damage with stellar scope-in speed. Moreover, the relatively large 10-bullet magazine size grants you the ability to miss a few shots before you hit the final coup de grace!

Starting with the best sniper in Warzone 2.0, the MCPR-300. This sniper has an insane amount of damage which can get you a lot of free kills. The best part is that headshots instantly kill the enemy regardless of the distance or the fact that they have armor or not.

Landing a headshot from a sniper rifle should feel rewarding. Thankfully, that is the case with the MCPR-300. The best part about this sniper is that it has a precise aim. This allows you to land hits on enemies even if they are running around.

It also has a 10-bullet magazine which means that you can potentially wipe out 2 players or an entire squad if you land headshots left and right!

The Victus XMR is quite similar to the MCPR-300. It has a lot of damage which can allow you to one-shot enemies if you land a headshot. Unlike the MCPR-300, though, the damage of body shots is a bit higher from the Victus. Even if you do not land a headshot, you can damage the enemy quite a bit.

If they are low on HP, a simple body shot will get you the kill. If that is the case, why isn’t this sniper placed higher than the MCPR-300 you ask? Well, the answer is simple! The Victus XMR – while having high damage – has a slower ADS and reload speed.

Since it can only hold 5 bullets, having a slow reload speed will mean that you will spend most of your time reloading the gun rather than firing it. This can miss you quite a few kills if you don’t land a headshot or target a low HP enemy.

The Signal 50 is an amazing choice for players that prefer a fast-firing sniper. It has the highest fire rate out of any other sniper in Warzone 2.0. You can almost continuously fire at the enemy and get the kill even if you miss the first shot. This makes it easier to land bullets on your opponents rather than waiting for the gun to reload.

However, as you’ve probably guessed by now, the Signal 50 doesn’t nearly have the same damage output as the MCPR-300 or the Victus XMR. This is done intentionally to make the weapon balanced in the game. However, thanks to the high fire rate, you can still deal the same amount of damage in quick succession.

Also, since Warzone 2.0 is new, there are a lot of beginners playing it right now. The Signal 50 will be your preferred sniper of choice due to its forgiving nature.

I have mixed feelings about the SP-X 80. It is a solid choice when it comes to snipers but with snipers like the MCPR-300 or the Signal 50, it doesn’t make it higher on the list. The SP-X 80 has one of the best ADS speeds in sniper rifles, and it also does a good amount of damage.

If you land a body shot, you will only need 2 bullets to kill the enemy. However, the same can be said about headshots as well if they are wearing armor. The issue with this rifle is that it has a higher recoil than most and you need a lot of attachments to make it perform better.

Finally, let’s talk about the LA-B 330. It is a solid sniper rifle, but it just doesn’t make the cut. The reason why it is at the bottom of the list is that this sniper doesn’t have the damage like the rest. Plus, the fire rate is also slower which can be a huge problem in a fast-paced situation.

While the damage and fire rate are good on their own, when you compare them with the others, it is below them. However, the good thing is that the LA-B 330 has a precise aim that allows you to easily land your hits.

Also, due to the weapon being light in weight, you can have more mobility as you swiftly run around the map. This is a good stat to have when you are playing Warzone 2.0 but it doesn’t justify putting the LA-B 330 any higher than this.

Low damage as compared to other Snipers

Slow firing rate as compared to other Snipers

There you have it. Those are the best snipers in Warzone 2.0. If you are a fan of long-distance combat, try out one of these sniper rifles and see which one suits your style best. I suggest that you use the Signal 50 if you are new to sniping or Warzone 2.0. Otherwise, you can use the MCPR-300 since it is easily the best.