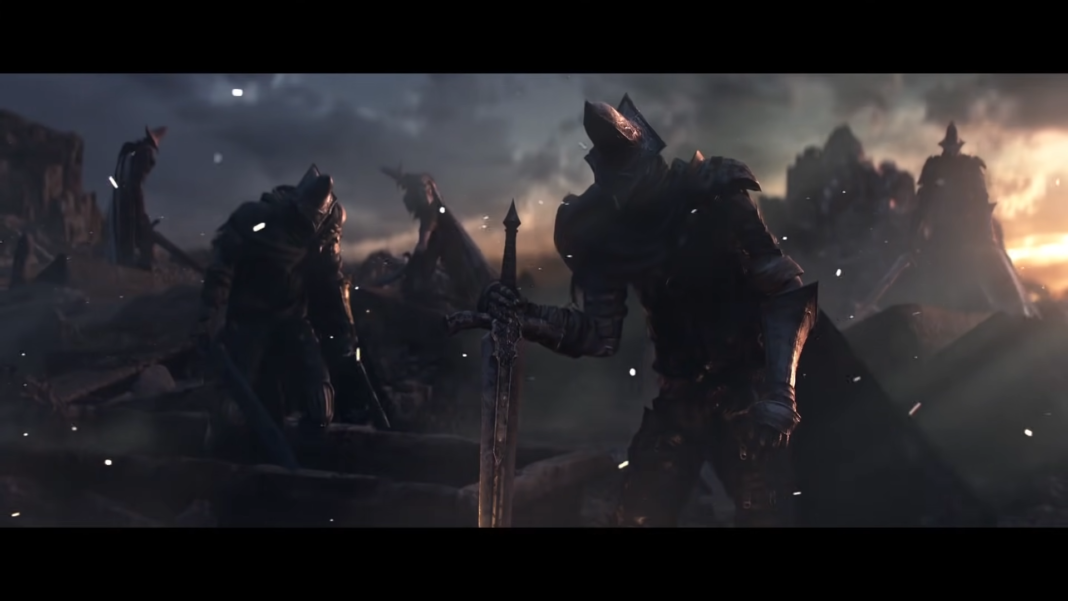 With the major success of the Dark Souls trilogy, one can’t deny the addictive yet gaming rage the game can induce in a player. Although there are many games that have been using the “git gud” type of feel to entice players, Dark Souls mainstreamed that type of game. So if you want to scratch that Dark Souls itch, here are ten of the best Souls-like games or games similar to Dark Souls available right now!

What better way to start off the list than with one of the latest Triple-A Souls-Like games. Elden Ring is one of the most highly anticipated games from FromSoft. With nearly a perfect score from every game critic, Elden Ring is the ultimate successor to Dark Souls.

If you’ve played Dark Souls before, then think of Elden Ring as an open-world version of the game. The combat feels like a much more fast-paced version of Dark Souls, emphasizing the reinvention of the entire skills mechanic. Now called “Weapon Arts,” Elden Ring makes the combat more explosive and fluid, incorporating powerful interchangeable spells in a weapon.

Also, the entire world is almost fully explorable to your heart’s content in Elden Ring. You can explore the world in any order that you wish. Due to the many similarities with the Dark Souls trilogy, many fans consider this game the 4th installment of the series.

Are you ready to begin your adventure in the world of The Lands Between?

Sekiro: Shadows Die Twice is another Souls-like masterpiece from FromSoft. You play as the shinobi called Sekiro A.K.A. Wolf, a servant of the Divine Heir, Kuro. Early in the game, Sekiro loses his hand and the Kuro upon battling Genichiro Ashina.

Sekiro later receives a prosthetic arm from a sculptor at the Dillapitated Temple. He is now tasked to retrieve the Divine Heir and protect him at all costs.

The unique posture mechanic separates the game Sekiro from other games in the list. The posture gauge is a special gauge that fills up when you deflect incoming attacks or take them from enemies. Both the player and the enemy have posture meters.

When you break the posture meter of an enemy, you can perform a death blow, which will shave off their life or kill them immediately. This mechanic is far from the usual ones we see in Bloodborne, Dark Souls, or even Elden Ring, making this game stand out.

Take on the mantle of Sekiro and become a legend.

The father of all Souls games, Demon’s Souls, is the first “Souls” game ever by FromSoft. The Kingdom of Boletaria is a world built around the vicious cycle of trial and error. You can clearly notice the foundations of the first Dark Souls game from the dark-medieval fantasy to the bleak atmosphere.

In Demon’s Souls, a dark and evil entity named The Old One starts to consume the Kingdom of Boletaria. Your task is to become the hero and savior of Boletaria by defeating the Fallen King Allant. Killing King Allant will rectify the problems caused by The Old One.

In 2020, BluePoint Games released a remake of Demon’s Souls for the Playstation 5. With the remake receiving high praises from critics, it has revived an underrated game from 2009. It is worthy of being the father of Dark Souls and a great souls-like game.

Reclaim the Kingdom of Boletaria and defeat the evil lurking within.

Another beautifully crafted masterpiece in terms of lore and art style, Bloodborne is another entry in Fromsoft’s long list of great games. In Bloodborne, you play as a “Hunter” through the city of Yharnam. You fight against the inhabitants of the said city who are infected with the “blood-borne” disease.

The disease starts with humans discovering a substance that enables miraculous healing. However, the catch is that this healing turns them into beasts and monsters. During the hunt, the player needs to eliminate these former people and find out what’s causing the plague.

The gameplay is a fast-paced and more fluid version of Dark Souls. The main selling point is relying on parries and transforming weapons. You have limited supplies of health replenishing items and ammo for your guns.

Recently, there have been rumors surfacing about Bloodborne’s release on PC; we’ll have to wait and see if we’ll be able to get our hands on this game.

Although many fans who first experienced Dark Souls looked at Nioh as “another attempt at poorly replicating a Souls-like experience,” critics thought otherwise. Nioh is one of the best Souls-like games that separates itself by having lightning-fast combat, along with the behemoth of mechanics it offers to players.

Nioh offers a variety of micro-manageable stats that each piece of armor contributes to. Not only that, it has a dedicated skill tree, weapon combo, stances, and lots more that players need to keep track of.

Another difference is that Nioh offers individual levels rather than one explorable open world. The larger levels still give off that Dark Souls design, with shortcuts to help you get back to a part of the level in case you die. Not many players appreciated this due to Nioh feeling disjointed throughout their playthrough.

Nioh 1 & 2 is a great alternative game similar to Dark Souls.

Mortal Shell is one of the more recent ones on this list besides Elden Ring. Surprisingly, Mortal Shell was Cold Symmetry’s (Developer) first game ever. They even have a nomination for “The Game Award for Best Debut Indie Game.” This nomination speaks volumes about how good the game is for an Indie developer.

It has a dark and gritty feel similar to the type of world in Dark Souls games. The game’s main selling point is the mechanic of taking a shell and using it as your primary combat body. It’s a very unique and good idea to incorporate this mechanic as it allows you to switch between different builds on the fly.

These shells also allow you a second chance if your HP gets depleted in combat. If you can get back to your shell during this period, your health will be fully restored. This mechanic allows new players to make mistakes, and the game forgives you for the most part.

Overall, if you want to go and delve into Dark Souls types of games, Mortal Shell is a good place to start.

You wake up as your custom character, an undead “revenant” with an unquenching thirst for blood. Your adventure revolves around figuring out what’s going on and saving the world. What keeps you stuck to the story is the idea that everyone has amnesia, poking you with the mystery that surrounds the events happening in the world.

As expected, Code Vein offers multiple Anime-Esque and flashy skills that truly involve you within its world. Certain enemies are also tougher to beat by staying with one playstyle, so the game sometimes forces you to switch up your strategies.

Are you ready to become a blood-drinking Anime character?

The Surge franchise is somewhat similar to Dark Souls, but not in the way you’d expect. Yes, the difficulty is there; however, that’s as far as it gets to being compared. It’s actually more similar to Bloodborne’s fast-paced combat and fluidity.

Once you have dealt enough damage to the area, it will allow you to chop that piece of armor off of the body and equip it to your liking. This mechanic is fun to play around with and adds a layer of strategy and depth to the combat.

The franchise’s biggest weakness, however, is the variety of bosses. Although it has been somewhat remedied in the sequel, still, it falls short of the original Dark Souls game.

Star Wars Jedi: Fallen Order is actually a surprising Souls-like game. Developed by Respawn Entertainment, many Star Wars fans rejoiced about this new Star Wars single-player game. What they did not expect was the game’s difficulty, especially on the Jedi Master Difficulty.

It contains similar mechanics to the Souls games. These mechanics include a meditation spot (Bonfire), enemies spawn upon rest, and limited healing that refreshes upon getting to a meditation spot (Estus Flask). Other than those mechanics, the developers also introduced a skills system that will make you feel like a true Jedi Master.

Not only do the mechanics seem all too familiar, but also the layout of the world, secrets, and shortcuts waiting for players to discover. Considering this is a Star Wars game, you’d expect a great story. Well, you are correct, and you’re in luck! Due to the highly positive reception of the game for its story, fans are screaming for a sequel to come out!

For now, I’d highly consider this one of the best Souls-like games ever made, plus it’s Star Wars!

Lords of the Fallen

Release Date: October 28, 2014
Platforms: PS5 via Backwards Compatibility and PS4, XBOX Series X/S and XBOX One X/S, PC via Steam or via GOG

Lords of the Fallen is another Souls-like game that didn’t see a highly positive reception upon release. The game actually received a mixed to almost negative reception due to bad balancing. As you progress throughout the game, your hero gets overpowered and removes the difficulty that makes dying obsolete.

You play as Harkyn, a prisoner for life until a priest named Kaslo breaks him out of jail. Kaslo’s reasoning is to have Harkyn help them quell the tides of the demon army. That’s it; that’s the story or rather the excuse to have Harkyn slay hundreds of demons.

From an axe to a polearm, the game lets you play to whatever your heart desires. It also has an arcade, hack, and slash feel to it, which you’ll be surprised, considering that this aims to be a Souls-like game.

The game also offers a class system like the Warrior, Cleric, and Rogue—all with different spells depending on your class. Warriors have spells that let you dish out more damage, Rogue spells allow you to be more stealthy, and Clerics have long-range and healing spells.

Although this is not the hardest souls-like game on the list, it at least deserves mention here since its sequel, Lords of The Fallen 2, will be coming out soon.

Those are our top 10 best Souls-Like games. Are there any games that you feel should have been included here? Tell us your thoughts in the comments section.