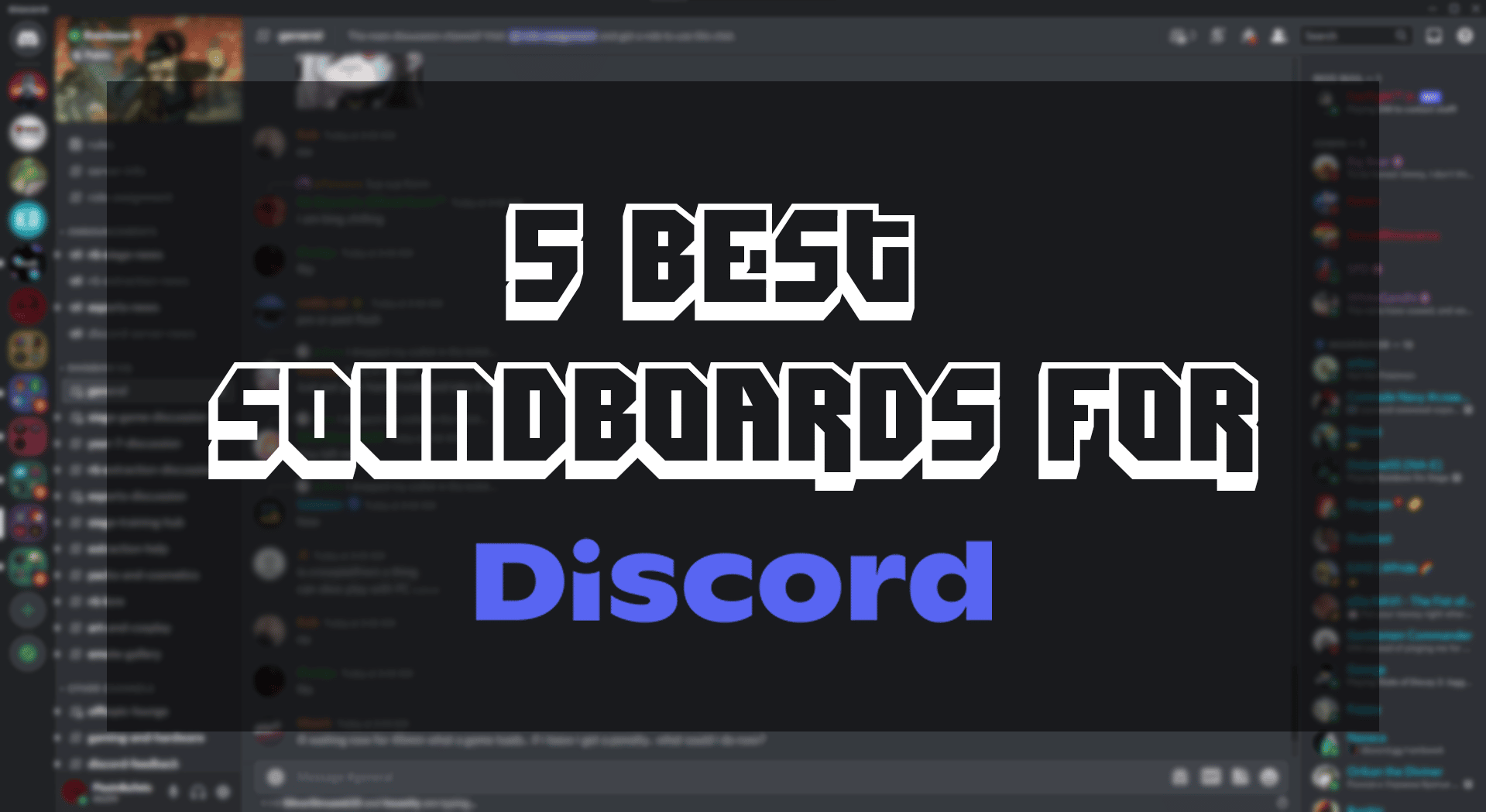 Discord is one of the biggest voice chat apps for gamers. It’s extremely convenient and allows you to hang out with your friends. Discord, on its own, is a bunch of fun and allows you to have a good time, and one way to really spice up your conversations is soundboards – or maybe have a cool profile picture instead.

What are Soundboards for Discord?

If you think about Soundboards in general, they’re a piece of equipment that musicians and DJs use to play certain sounds at the click of a button. Every button has a specific sound effect bound to it. It’s convenient and handy hardware that helps them make live shows what they are today.

But, when we know Discord in the mix, soundboards aren’t used to make tunes. They’re mostly being used to meme around and have fun with your friends. Instead of being a physical piece of equipment, Discord soundboards are mostly software. Whenever you press a button, it plays the sound through your mic to those that are sitting in a voice chat with you.

If you can get a little bit creative here, you can have loads of fun with your friends and a soundboard. With that said, here are the five best soundboards for Discord that you can install today. If you are in the mood for the best music bots though, we’ve got you covered!

Due to the insane amount of features available, Soundpad was able to make the number one spot on our list. This soundboard is just extremely convenient and is a walk in the park to use, even for people who haven’t used soundboards in the past. It’s super lightweight, which reduces the amount of load it puts on your CPU during gameplay. This unique feature makes Soundpad amazing for low-end PCs that need every bit of resource to run your games properly.

Soundpad comes with dual play functionality. You could open the Soundpad window in the background and play files from there directly. Alternatively, you can also map every single track in your list to a specific hotkey, so you don’t have to switch back and forth between windows.

Soundpad also has built-in features to improve the quality of your audio files. Firstly, you can use the built-in sound recorder and editor to create high-quality, custom sounds. Apart from that, the tool has its own volume normalization module.

This is a great feature if the volume of your audio files is inconsistent, i.e., some files are loud, and some are quiet. Volume normalization helps you bring them all on the same decibel level to ensure that your soundboard isn’t annoying for your friends.

Resanance is a classic tool that isn’t too flashy, but it gets the job done. What makes Resanance so great is the fact that it’s constantly being updated. The developers take the user’s suggestions into consideration and are constantly working to make the app better. It has a TTS Text to Speech soundboard as well, which makes it that much better. You have the option to control every sound volume individually to optimize the experience. Resanance does want you to annoy your friends with high volume, so if you’re just looking for casual sounds, this isn’t the tool for you.

Resanance works in practically every single voice chat app out there. From Discord and Teamspeak to Zoom and Google Meet, the app supports everything.

To make things a little easier, the app also lets you create a digital soundboard of sorts where you can load up a bunch of buttons and attach each to a sound on the back end.

JNSoundboard is an extremely feature-rich soundboard. The reason why we absolutely love this soundboard is that it is completely open-source. If you need to make some changes or alterations to the underlying code to customize it, you have the option to do that since the entire code base is available on GitLab.

The soundboard is absolutely amazing if we consider the number of audio formats it supports. You can use MP3, WAV, WMA, M4A, and AC3 audio formats. This pretty much means that if the file you’re dealing with is audio, there’s a good chance you can load it up on JNSoundboard.

Apart from that, you get all the basic but necessary features every soundboard has. You can bind sounds to hotkeys, play random sounds out of a selected group, and export hotkey presets to an XML file, so you don’t have to redo the hotkey setup in case you have to reinstall the app.

You also have a specific hotkey that can cancel out any ongoing sound. To make things easier for you, JNSoundboard even presses the push-to-talk key for Discord when you’re playing sounds.

This one is definitely for the memers. Voicemod is a modernistic soundboard focused on helping you meme. The best part about Voicemod is that it doesn’t have a lackluster UI that you might find in some of the soundboards mentioned above. The app has an insane library of meme audios that you can use to troll your friends. The convenient aspect here is that Voicemod is constantly updating its library with the latest memes so you can stay up to date with your soundboard game.

Voicemod is fully compatible with Discord, Zoom, TeamSpeak, OBS, Steam VC, and a lot of in-game voice chats for games like Valorant, CSGO, GTA V, PUBG, etc. The best compatibility feature that a lot of other soundboards don’t have is native support for Elgato Stream Deck. This support makes Voicemod perfect for Twitch streamers looking to make their streams a bit more colorful.

MorphVox is a powerful soundboard and voice changer combo. The reason behind it being dead last on our list would be the enormous paywall blocking all the fancy features. The app costs $39.99 USD upfront for the base applications. After that, you have to pay for sound packs and the necessary plugins, which cost anywhere from $2 to $10. So, if you’re not okay with whipping out your credit card every few days, this probably isn’t the app for you.

MorphVox comes with a ready-to-use set of sound packs that you can use in Discord and a bunch of other apps. But, even though this list is not about voice-changing software, we do have to compliment the voice-changing features in MorphVox.

It’s probably using one of the best algorithms out there for noise cancellation and voice changing. All the tools combined give you a crispy clean, voice-changing experience unlike any other.

How do I Setup My Discord Soundboard?

The process varies depending on which soundboard you’re using, but the basic principles remain the same. You’ll have to install the app and set up the right audio settings. This includes selecting the right mic and speaker devices.

The app will need this since the whole purpose of having a soundboard is injecting audio into your mic output. After that, you will have to set up your hotkeys and list of audio files, and you’re good to go!

What is the Best Soundboard for Discord?

The best soundboard depends a lot on your specific use case and what you plan on doing with it. But, if we had to recommend one, we’d go with Soundpad. It has everything that you could ask for in a decent soundboard and provides all the tools a person needs to liven up their voice calls.

How Do Soundboards Work?

Most soundboards also relay this audio into your headphone/speakers, so you know what’s being played. However, this isn’t always the default setting. You can take a look at the settings in your installed app to find this option.

Digital soundboards aren’t anything new. But they’re a tremendous amount of fun to use with friends and troll people in games generally. We’ve all had the casual CS:GO match where some guy is spamming songs on the voice chat constantly, and they’re actually super fun (or so we like to think!)

If you want to be that guy on Discord, just pick a soundboard from our list and install it today! While you are out there, take a look at our best Discord bots for this year! You’ll surely find one you’d like to invite to your server.