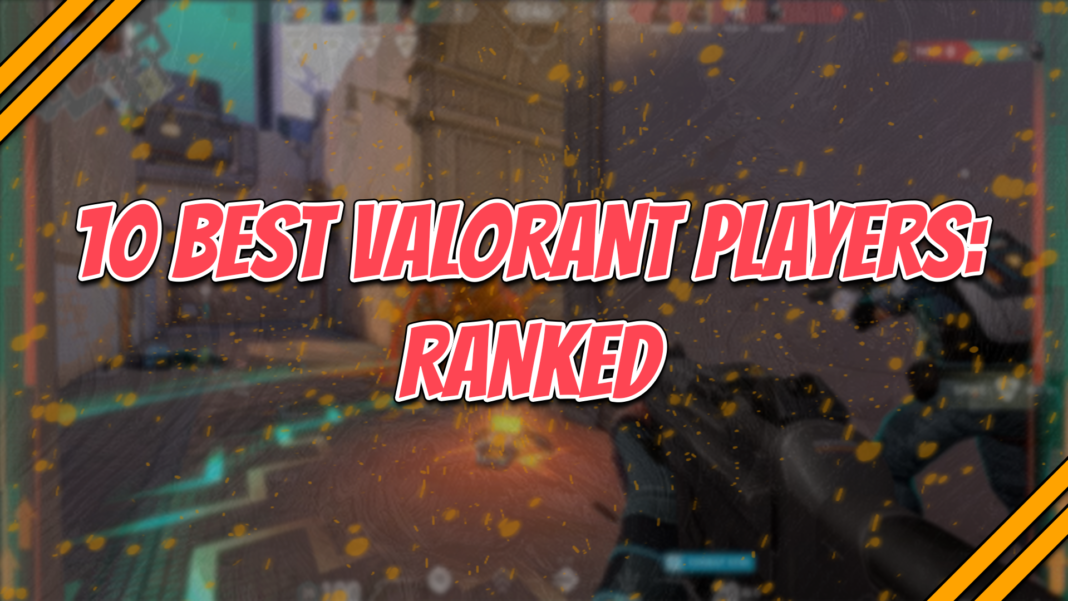 Ranking the best players in any sport or game has always been a fun thing to do. Debating whether a player is better than the other is always something that fans will do. We all create imaginary 1v1 scenarios and bring out the stats when trying to determine the best player.

Valorant is no different. We all would love to know who the best player in the world is. We all have our favorites and reasons for who we think the best player is. With this list, our goal is to rank the 10 best Valorant players in the world. Remember that it is going to be based on stats, achievements, and a little bit of our opinion, so you’re entirely free to disagree with any of our rankings. Feel free to leave a comment down below.

Before we begin the list, let’s first establish some of the ground rules that we’ve used to make this list.

Aside from those four rules, we’ve considered each player’s statistics, local and international success, achievements, importance to their team, consistency, and overall skills. Now that we’ve established the rules and criteria let’s start with the list.

The player we believe to be the current best Valorant player in the world is no other than Optic’s yay. I feel like this is really no debate at this point. He’s always been one of the best players and fraggers in North America. He struggled at first, but OPTC yay, eventually got the hang of Valorant and completely dominated the pro scene.

Jaccob “yay” Whiteaker mainly plays agents like Chamber and Jett for Optic Gaming and has helped lead his team to victory in the VCT 2022: Stage 1 Masters – Reykjavík. He had the highest K:D ratio in the whole tournament at 1.32 and the 2nd highest average combat score at 252.3. He also earned a total of 417 kills throughout the tournament.

Next up, we have none other than the “headshot machine” himself, ScreaM. ScreaM has always been known as a player with one of the best aims in both CS:GO and Valorant. He just one-taps enemies so flawlessly using his dot crosshair. Unfortunately, Team Liquid has struggled at international tournaments. But, ScreaM has helped his team appear in 3 out of the 4 international events, which is still a great achievement in its own right.

Adil “ScreaM” Benrlitom carries his team through most of their games. He’s a high-kill type of player and excels at what he does best, tap some heads. This was in full showcase during the VCT 2022: Stage 1 Masters – Reykjavíkevent, where he had the highest average combat score of 260.5 and a top 5 K:D ratio of 1.22.

Sentinels TenZ was once regarded as the best Valorant player in the world, especially when they completely dominated all teams during the VCT 2021: Stage 2 Masters – Reykjavík tournament. Sentinels didn’t drop a single game in the event and ended up winning the whole thing.

Unfortunately, Sentinels hasn’t been doing great recently, even in the local NA scene. Even though he’s not considered the best player in the world anymore, he’s definitely still one of the best Valorant players in NA. TenZ usually plays Valorant agents like Jett and Raze

Acend cNed helped his team bring home the Valorant Champions 2021 trophy. Anyone who leads his team to a championship is worthy of being in the “best Valorant players” conversation and cNed is no different.

Jett is one of the most popular and most picked agents in Valorant. Acend cNed is widely considered one of the top Jett players globally and is godly when he has an Operator at hand. Acend has been struggling lately, but cNed is still the same old cNed that helped his team become the first Valorant world champions.

Next up, we have a player that you probably didn’t expect to see in this list, especially this high. Usually, when you say “best Valorant player,” people automatically think of flashy players and top fraggers. However, this shouldn’t be the case. Valorant is a team game, after all, and there are other roles and agents that are great outside of kills or flashy plays.

FNC Boaster is one of the core members of the Fnatic Valorant team and has led the team to 3 out of 4 international tournaments. He’s definitely one of the best IGLs (In-game leaders) in the game and helps his team become consistent contenders both locally and internationally.

Gambit nAts is another non-flashy player who deserves to be called one of the “best Valorant players.” He is one of the most versatile and flexible players in the game and can either play a controller role and smoke for his team with Viper or provide a stellar defensive setup with his Cypher.

Through his versatility, nAts helped lead his team to become champions in VCT 2021: Stage 3 Masters – Berlin. It’s scary to think that nAts can also step up and carry games when needed, even though he plays non-duelist agents. Gambit nAts is undoubtedly one of the most skilled Valorant players in the world.

G2 Mixwell is another popular name on this list. He was already well-known during his CS:GO days, but he became more popular when he switched to Valorant. Mixwell is a core member of the G2 roster and has helped them get to multiple international Valorant tournaments.

Mixwell is another great flexible player who has poured thousands of hours playing Valorant using different agents. He used to be a Jett player, but he has recently transitioned to playing Chamber, Skye, and KAY/O.

The Guard’s Trent is a young and upcoming Valorant prodigy who has insane skills and still has great potential to grow. He’s only 17 years old, yet, he’s already one of the world’s best Valorant players.

The Guard has recently been dominating the NA pro scene, thanks to Trent among his other young peers. He mainly plays initiator agents like Sova, Skye, and Breach. He is one of the best initiator players NA has to offer, and we all know how annoying great initiator players can be.

Next, we have an Argentinian player from KRÜ Esports. KRÜ Klaus used to be an Overwatch player, but he switched to Valorant in 2020 and never looked back. He has helped his team dominate the LATAM region on agents like Sova, Breach, and Viper.

KRÜ Klaus has helped his team get into all 4 of the international Valorant events by being a dominant force in the LATAM region. KRÜ is the only team to have participated in all 4 international tournaments, and that’s impressive in its own right. Klaus has been there through all 4 tournaments and has been a huge part of their success as a team. He definitely deserves his spot here and is currently the best Valorant player from LATAM.

We’ve finally reached the end of our list. We believe that this spot belongs to DRX BuZz. BuZz was part of the original Vision Strikers roster who had the insane 102-series win streak after competing for over a year. That’s an insane record to hold and shows their complete dominance over South Korea.

BuZz is a massive part of DRX’s dominance over South Korea. He is one of their main fraggers and can pull off some insane plays and clutches that will simply blow your mind. He used to play a lot of Jett but has recently transitioned to Chamber as the primary Op-er. Overall, he is a fantastic player and deserves his spot as number 10 on our list of the best Valorant players.

That’s the end of our list. Those were our picks for the 10 best Valorant players in the world. Remember, these are based on statistics, consistency, achievements, and our personal opinions. These rankings are based on who we think the current best players are, and there’s no saying what will change in the future.