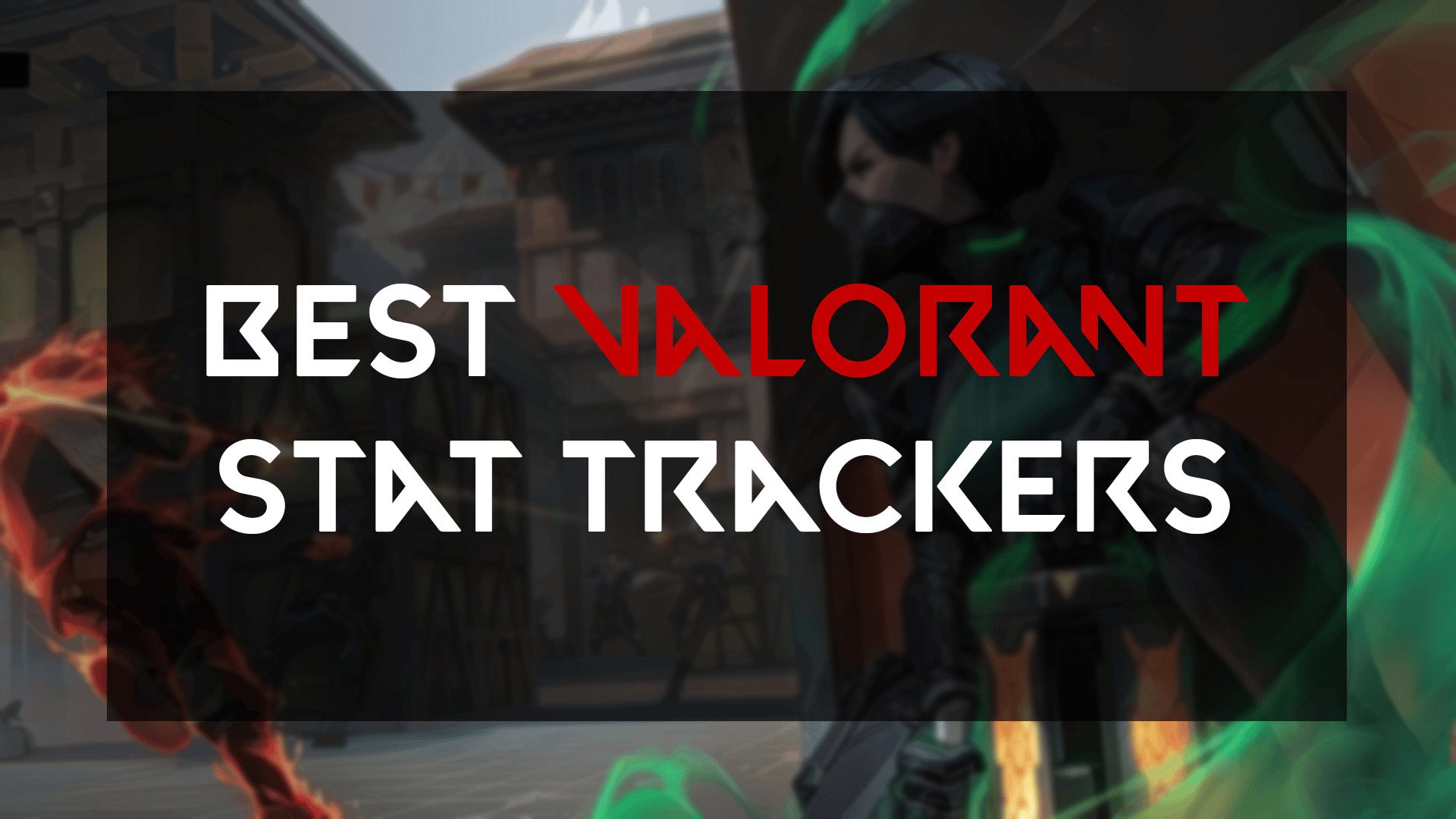 Valorant is, without a doubt, one of the biggest FPS games in the world right now. It’s still a relatively newer game when you pin it against some classics like Counter-Strike: Global Offensive which has been around for almost a decade. However, there are a few no-brainer features that aren’t added to the game despite a large player base asking for them. And, no, I’m not talking about map queues (Riot, if you’re reading this, please, I don’t want to play Breeze four times in a row). The feature I’m talking about here is stat tracking.

Unlike its main competitors, Valorant is yet to add any kind of stat tracking features that let players understand how good/bad they’re doing in their games. It’s not even possible to check the very basic stuff, such as the number of hours you’ve played the game. Riot has not given us any built-in method to analyze the meta and see what agents are the best in a certain patch.

And, if a mainstream developer doesn’t give the players a feature they’re asking for, you can bet that some third-party will. But, before we get into that, let’s talk about what stat trackers are very briefly.

What are Valorant Stat Trackers?

Here’s are five of the best Valorant trackers you can use to analyze your gameplay, understand the meta, and develop as a player.

Overwolf is a pretty popular name in the world of third-party apps for competitive multiplayer games. It’s a tool used for a lot of competitive games like Dota 2, CSGO, etc. It’s a widely used app for Valorant as well with over 1 million downloads from their website. The fun part about using Overwolf is that it is integrated with Tracker.gg. This means that you’re sort of getting the best of both worlds with this tool.

Overwolf also has a ton of community guides integrated into the platform that allows you to learn secret tips and tricks that other players are discovering all over the world. The neat feature of Overwolf is the real-time statistics that help you calculate your chances of securing the win. Overwolf does lack a lot in terms of functionality, but it’s a decent tool regardless.

The best part about Overwolf’s Valorant Tracker that absolutely blows other tools out of the competition are the real-time stats it shows of your teammates. As soon as you enter the agent select screen, you’ll see every player’s K/D ratio, win percentage, and a W-L track record of their recent matches. This really helps see if that instalocking Reyna is even remotely good or they’re just going to grief your game. Apart from that, it also shows the rank of every person in the game. However, to see the detailed stats, the players on your team need to give permission to the Valorant Tracker before their stats can be tracked.

Tracker.gg is another brilliant Valorant stat tracker that I absolutely love. The most unique aspect of this Valorant tracker is the public guides. If you found some sick peek spot, a weird Viper lineup, or maybe just found the shock dart bounce of your life, you can post the guides to Tracker.gg. Other players will get an extra trick or two up their sleeves while you’ll earn unique awards for your profile. This is what makes Tracker.gg special.

The stat tracker comes with its own dedicated mobile app, which isn’t something you’ll find in most Valorant stat trackers. Tracker.gg is perfect if you just want to learn a bit more about Valorant on the go.

Tracker.gg is a brilliant tool that gives you all the personal data you could expect from a Valorant stat tracker. It highlights your strengths and weaknesses, letting you know what you’re doing right and what areas you still need to improve on.

Dak.gg is a decent Valorant stat tracker. However, it lacks some of the features that Blitz and Tracker are offering to players. The tool does give you a deep insight into how well your recent matches have been going, the win rate, average damage, average kills, and some other useful stats. However, it lacks the strengths and weaknesses feature that put Tracker.gg at number two on my list.

Apart from that, Dak.gg also offers global statistics like agent pick rates, win rate, first blood percentage, KDA, etc. Moreover, a feature that I really liked in Dak is the agent comps. It provides analytical data of the most successful agent compositions in any given patch. All of this data is refreshed every 24 hours so you can have the latest meta picks show up here on the same day.

ValorantStat.xyz is an app that greatly emphasizes the importance of individual playstyles and helps you make the best of your skill to win matches. You’re getting all the basic things like your performance on specific maps with certain agents, weapons, and team compositions. It also tells you some of the things that you need to focus on with your gameplay.

Furthermore, ValorantStats.xyz has an advanced algorithm that generates insights after every match you play. This analysis gives you an overview of how well you played in comparison to previous games, along with what you did, good and bad.

Blitz has been one of the most consistent Valorant trackers out there with an insane amount of users. The app has been fine-tuned to ensure that it puts all the necessary stats in the hands of an amateur Valorant player. To use Blitz.gg, you’ll need to download their app and have it running during your Valorant gameplay. Here are some of the main features of Blitz that you will find particularly helpful.

Blitz has a database full of stats for maps, agents, and weapons. They’re constantly giving you information about the most picked agents throughout different ranks, their win rate on certain maps, the best team compositions, and much, much more.

Apart from the global stats, Blitz also gives you a dashboard to view your previous match history, the percentage accuracy of your shots, and how well you’ve been doing in comparison to your recent matches.

We all have those games where we just take a minute to wonder what went wrong. If you want some AI-driven data to analyze your mistakes, Blitz provides post-game breakdowns of your game that might just help pinpoint the issue in your gameplay.

However, the one reason why the app is at the bottom of our list are the ads. The tool sort of forces you to purchase the pro version by displaying ads to cover content that you’d like to access after a game. It’s fine at first but gets pretty annoying if you’ve been using it for more than a few weeks.

What Stat Trackers Do Pros Use in Valorant?

Blitz.gg remains one of the most popular stat trackers that a lot of pros are using to track their gameplay. TenZ is one of the pro players that publicly endorse Blitz amongst many others, too.

Does a Stat Tracker Help Improve Your Aim?

No, a stat tracker is not a tool to improve your aim. You can get helpful insights about where you usually aim (head, body, legs), but that’s as far as it goes. If you do want to practice and improve your aim, you can consider using something like an aim trainer that’s made specifically for making your aim better.

Can I Get Banned for Using Stat Trackers?

Usually, the answer is no. Third-party stat trackers are usually browser-based so they’re not interfering with your gameplay in any way. However, some apps like Blitz do make you download their application which runs simultaneously with Valorant. However, if the app does not comply with Valorant’s policies, there’s a good chance you’ll get banned.

Most of the apps offering stat tracking services for Valorant are extremely underwhelming. Riot’s API isn’t making the job easy for them as they only allow third-party apps to access the last 20 matches. So, in order for these apps to be effective, you’ll have to log in frequently. With third-party apps like Valorant trackers, there’s always a risk of bans too.

Riot’s anti-cheat ‘Vanguard’ does not like it when other apps interfere with the game. However, the five Valorant stat trackers we’ve mentioned on this list are compliant with Riot’s policies and will not result in a ban under any circumstances.