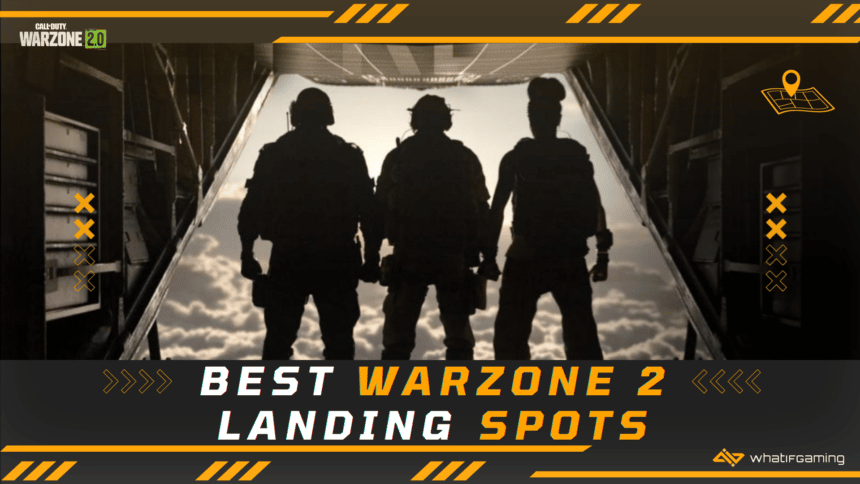 Choosing an optimal landing spot can be the difference in winning or losing the game. If you want to find good loot early on in the game and gear up for the late game, you need to land at the right spot. That is why this guide will show you the best Warzone 2.0 landing spots right now.

Since the game is relatively new, players are still trying to find out which area is the best to land on. Some of these places are quite popular, meaning there will be many enemies. At the same time, others are still underrated and will allow you to get good loot and win the game. With that said, let’s get started!

There are a lot of great locations where you can drop to get good loot. However, some of these locations might have a lot of enemies and not enough loot for everyone. So, you will have to fight your way out of these areas and be the last person or team standing.

Starting off with one of my favourite landing spots in Warzone 2.0, The Quarry. It is one of the more popular landing spots, so there will be quite a few squads landing here. However, what’s interesting about The Quarry is that it is situated between Rohan Oil and Port. So, chances are that enemies will often go to those locations.

Plus, since The Quarry is at the edge of the map, most players tend to avoid that so they don’t have to run too far if the circle is on the other side of the map. That makes this place one of the best landing spots. Since it is often neglected by most players, you will find a lot of loot that will let you play safe till the end-game.

If there are a few teams landing here with you, the loot might not be suitable for everyone. However, it is one of the best places where you can rotate to other areas and take out the last person standing there to get their loot.

Found at the center of the map, the Observatory is a high-risk, high-reward location. While there might be a lot of teams landing here, if you know which place to exactly land, you will have an advantage. Try landing close to the observatory towers and quickly enter them. They have decent loot to get you started and eliminate all surrounding enemies.

Plus, due to its elevated and strategic position, you can camp in the observatory towers and see the surrounding areas as well. If you find a good sniper, you will have a great time picking off enemies from a distance.

While you have to fight a lot of threats early on, being the last team standing here can have a lot of advantages. Overall, this place has great loot if you can get it all.

The Al-Bagra Fortress is one of my favourite spots to land in Warzone 2.0 Because it has many lootable places inside cover, which can be helpful whenever you are starting as you won’t be vulnerable and out in the open.
Caves

The most compelling aspect about this drop zone is that it is situated on the outskirts of the map, meaning you will attract less attention because people prefer to be in the middle of the map to have easier access to other nearby areas.

If many teams or players land beside you, you can always hide in the corners and strike when people are busy looting, as the lootable chests are enough for multiple teams.

A lot of traffic

The Al-Bagra Fortress is one of my favourite spots to land in Warzone 2.0. Because it has many lootable places inside the cover, which can be helpful whenever you are starting, as you won’t be vulnerable and out in the open.

The most compelling aspect about this drop zone is that it is situated on the outskirts of the map, meaning you will attract less attention because people prefer to be in the middle of the map to have easier access to other nearby areas.

If many teams or players land beside you, you can always hide in the corners and strike when people are busy looting, as the lootable chests are enough for multiple teams.

Located near the Observatory, Ahkdar Village is a great landing spot for players that prefer close combat. It has a lot of buildings and tightly enclosed spaces. Due to having a lot of covers, it is a good place for beginners to land as well since you won’t have to worry about getting sniped from the distance.

Plus, it offers tons of rare loot that will help you get started in Warzone 2.0. Make sure that you loot as many buildings as you can to have the ideal early-game setup. The nearby shop also lets you customize your optimal loadout as well.

SMGs perform the best in this area since you will fight enemies that are really close to you. Other than that, assault rifles also do the trick but you have to choose the correct ones that have a high fire rate.

If you fancy fighting tons of opponents during the early game, Al Mazrah City is the heart of Warzone 2.0. It is found in the northeastern part of the map and it is absolutely massive. In fact, it is the biggest location in Warzone 2.0, making it one of the most popular spots in the game.

This location has a mix of buildings and open spaces. So, you will have to engage in close and long-distance combat simultaneously. Plus, thanks to the Orange Supply Boxes, you can easily gather money to buy your loadout or other gear.

With that said, though, Al Mazrah City isn’t the ideal landing spot for a beginner. So, make sure that you avoid it if you are new to the game and do not want to see a lot of action early on.

The Al Malik Airport is a surprisingly underrated location that is slowly gaining traction. There is a mix of both buildings and large open spaces. You can find tons of rare loot from this location if you loot every building or get to the control tower.

Be careful though, I have seen many players camping in the control tower. If you are certain no one is in it, you can climb it and get the layout of the land. Plus, if you have a good marksmen rifle or a sniper in your hand, you can easily get a few eliminations as well.

The Caves are currently one of the best landing zones if you plan to get early kills because it has many tiny houses and elevations. You can get some pesky kills by using an SMG or a Shotgun. You won’t be out in the open because the caves have ample cover.

One of the most notable aspects is that this dropzone is very close to the Hydroelectric power plant, so you can quickly drive over there and get some more exit frags. This proximity to other drop zones can be beneficial in the beginning because you will quickly rack up kills.

Stay calm if teams are also dropping into this area along with you. Plenty of lootable storage boxes are scattered around the area, meaning you can not run out of loot.

Sawah Village is probably the least crowded area on this list. It is situated away from all the action and usually, the circle as well. So, if you are prepared to do a lot of running, Sawah Village will be the ideal location to drop at. Whether you are landing here alone or with a team, you will find good loot that will assist you in preparing for the mid-game.

One thing to note about this location is that there is a lot of water surrounding it. So, be prepared to swim to get to the other side or other buildings. This can also mean that some players are camping underwater just waiting for you to walk in unsuspectingly.

That can work in your favor as well. If you don’t want to get noticed, make sure that you dive underwater if you see other enemies. Wait to get the drop on them or completely avoid them if you are unsure of your winning chances.

I suggest that you quickly rotate from this location once you get decent loot and make your way to the Cemetary or Sarrif Bay.

The Hafid port is also an excellent beginner-friendly drop zone, as it has big warehouses and ample room to fight someone in case the situation arises. You won’t have to waste your time in close-quarter fights.
This area can be beneficial whenever you plan to play slightly defensively because you will have a lot of loot available, with a lot of room to use the equipment properly.

One of the best aspects of this map is that it is near the outskirts of the map. Although still close to the Sa’id City, which can help you get a lot of kills if you properly loot the port and drive over to the city because the city usually gets a lot of traffic.

You are in luck if players are landing with you because you can quickly get weapons and start shooting them down. After all, the area is very much out in the open, and the insides are also hallways and warehouses. So there isn’t much room left to hide and camp.

Finally, Rohan Oil is another great place where you can land. Before we talk about how good it is, I want to state that it is a relatively open area. So, make sure that you always stick to cover if you don’t want to get shot by a sniper or get spotted.

It can be located in the northwestern part of Al Mazrah, and it has good loot spread around the area. While it is somewhat popular, you won’t find a lot of players there, depending on where the plane’s route is. Plus, if you get the place to yourself, you can easily gear up for the end game and camp the circle.

Another great part about this place is that a Stronghold is present nearby. Strongholds are a new addition to Warzone 2.0 that offers challenges to the player. If you clear them, you will get tons of rare loot that will let you complete your loadout.

That’s everything you need to know about the best Warzone 2.0 landing spots. These areas have good loot and will allow you to gear up for the mid or end-game. However, some of these places are quite popular spots so watch out for that since there will be a lot of enemies landing there.

Which landing spot do you like most? Is there an area where you always land and feel like is a great landing spot? Let us know your thoughts in the comments below.

In the meantime, check out our Warzone 2.0 tips and tricks as well to help you get started with the game.