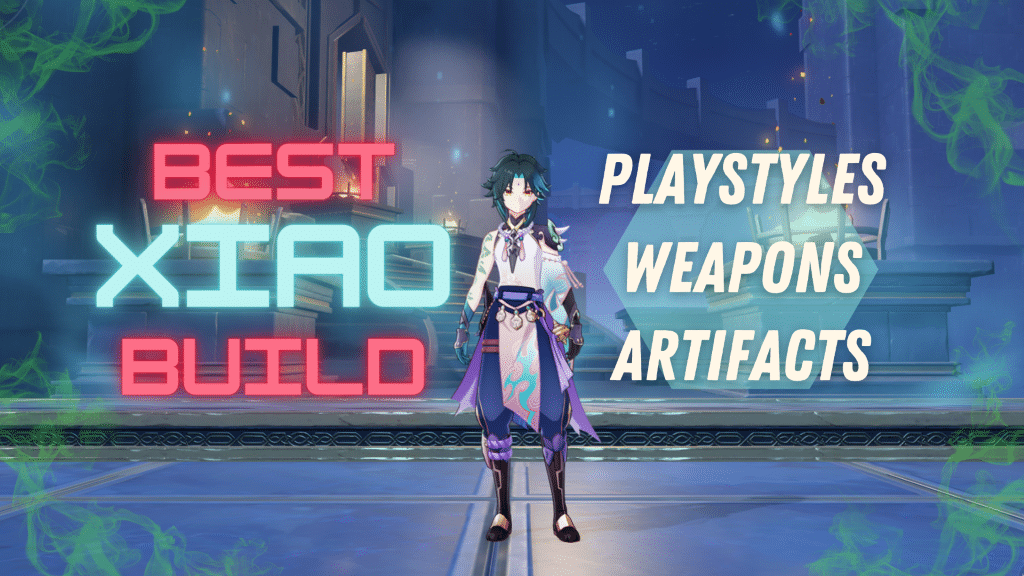 On the Genshin Impact 1.3 update, the adeptus Xiao, a 5-star playable Anemo character, became wishable for Travellers. Multiple banners have passed since then, and now, on the Genshin 2.4 update, we see the return of our favourite polearm-wielding adeptus.

Whether you’re here to refresh Xiao’s build or working on him from scratch, we have you covered. This build discusses the latest best artifacts and weapons for the 5-star Anemo boy. You’ll also find a breakdown of his talents and playstyles. Continue reading to find out more!

Xiao is a powerful DPS that works well in teams with another Anemo character, for the Elemental Resonance increased movement speed and a shielder. It has been around 11 months since Xiao’s release, and many Genshin Impact players have devised in-depth guides about him.

Xiao’s playstyle focuses on dealing AoE damage through his plunge attacks. His Elemental Skill, Lemniscatic Wind Cycling, has two charges. Once pressed, Xiao dashes forward and deals Anemo DMG to enemies on his path. This Skill works as a plunge attack.

The adeptus’ Elemental Burst, Bane of All Evil, does not only look eye-catching but stands as Xiao’s most important part of his kit. Once activated, Xiao places a Yaksha Mask on. His jumping ability is greatly buffed in his Elemental Burst. In addition, his attack AoE and attack DMG are increased. Lastly, all of his attack DMG is converted into Anemo DMG.

The Skill lasts for 15 seconds and costs 70 Energy. When Xiao’s Burst is up, he loses a little bit of his life per second. The Life Drain is 2% of Xiao’s current HP per second. It’s not that noticeable in fights, but it can be annoying against enemies that drain HP as well. This is why Xiao works well in teams that have a shielder, and of course, a healer.

The optimal rotation for a Xiao team composition typically goes like this:

Xiao’s playstyle is not for everyone, especially if you get dizzy easily while playing the game. The constant up and down motion can be uncomfortable to watch if you’re not used to it.

It’s not surprising to hear that the 5-star Primordial Jade Winged-Spear is by far the best weapon on Xiao. Not only does this sparkling spear match Xiao’s character aesthetics, but it is also his featured weapon. The 5-star spear has a high Base ATK and a CRIT Rate substat, perfect for Xiao. In addition, Xiao gets an ATK bonus through the passive skill.

The second best weapon for the adeptus is another 5-star polearm-the Staff of Homa. This weapon also has a high Base ATK plus a CRIT DMG substat. Xiao also gets an HP and ATK increase through the weapon’s passive.

The new 5-star polearm, the Calamity Queller, is also a decent weapon to use on Xiao. It has a high Base ATK and an ATK% substat. The passive effect increased the wielder’s Elemental DMG Bonus and ATK.

Sadly, Xiao does not work well with any craftable 4-star weapons currently available in the game. Cries in F2P. The 4-star options for him are the Battle Pass’ Deathmatch, the Starglitter Blackcliff Pole, or the gacha Lithic Spear. Each of these weapons works well with Xiao. If you want to see a detailed breakdown of the damage output of each polearm, you can watch Xlice’s Complete Xiao Guide.

Let’s move on to the masked Yaksha’s best artifact sets to build. Thankfully, it’s pretty straightforward and has options to choose from, thanks to the recently released artifact sets a couple of months back.

You can build Xiao with a 2-piece Viridescent Venerer for the 15% Anemo Bonus DMG, paired with a 2-piece Gladiator’s Finale or a 2-piece Shimenawa’s Reminiscence, both for its 18% ATK Bonus. By now, you probably have a lot of Galdiaotor pieces to spare. It all depends on finding the pieces with the best substats.

The substats to look for are: CRIT Rate, CRIT DMG, ATK%, and Energy Recharge.

Are you planning to pull on Xiao’s Invitation To Mundane Life Banner, or are you skipping? We wish you all the best of luck if you are planning to pull! Stay tuned for more builds on the two other new characters released in the patch.