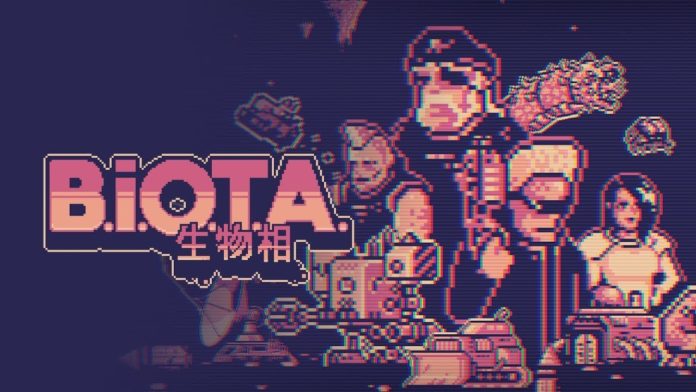 Here’s a 2D Metroidvania action-platformer set in a mining colony infected by an alien plague. Retrovibe and Small bros bring us this charming 8-bit game with 8 playable characters to unlock and upgrade.

Whether you’re craving some old-school Nintendo Game Boy aesthetics or a neon-infused arcade-style, B.I.O.T.A. has 54 unique 4-color palettes to unlock. Swap them anytime during your play to completely change the game’s 8-bit visuals.

With a decent synth-wave soundtrack, an immersive story campaign with two endings, and arcade levels to test your aiming and other platforming skills, we bring you no spoiler review of B.I.O.T.A.

The overall story felt generic to me: A meteorite hitting planet earth, humans discovering Viridium, a valuable resource for unlocking interplanetary travel constantly being sought after by mining colonies.

As you journey in this pixel world, you’ll be discovering bosses and other strange creatures cleaning up the infested planet of aliens. Every area you visit has its own black market where you can spend Viridium refilling your special ammo or upgrading your characters.

Exploring the different areas feels like you want to completely cover all bases. Can it be a speedrun candidate? Probably yes, with an active community.

Controls felt smooth on a gamepad, which B.I.O.T.A. is optimized for. You can play this on a keyboard but as someone who’s already used to playing platformers on a controller, it might take time to get used to.

If you want to take a break from exploring the world of B.I.O.T.A., you can try out playing its Arcade mode. The shooting range can be a good warm-up for your platform sniping skills. Especially if you use Flynt a lot in this game with over 10 stages of shooting exercises.

B.I.O.T.A. gives you up to eight characters to choose from, each with its own unique abilities. Initially, you’re given the Gemini II Squad – four characters at the start of the campaign and you can pick someone depending on your playstyle.

The only nitpick that I would have for the character selection is that I wish the text was clearer to read.

Here are the following characters that you can pick at the first part of the campaign along with their primary weapon and specialty:

Personally, I like using Flynt a lot in this game because of his large ammo supply for his Sniper Shot. His specialty is very useful for those annoying enemies that are hard to beat without the need to sacrifice a few health bars.

Go for Zeed if you like close-range combat and some run and gun action. His shield ability lets you run over enemies (except bosses). Ace is also a nice choice if you’re the spray and pray type of player, and his hand bomb is useful for quickly finishing off hordes.

I’m not really a Kirill fan since most of the enemies can get eliminated easily with a primary weapon. I rarely use his C4 in most situations.

We leave the other characters for you to discover while you traverse the different parts of the world.

Don’t Forget To Hit Save

As someone who’s exposed to soulslike and roguelike games, I had this tendency to forget to save in the middle of my explorations. This is where the challenges and frustrations of B.I.O.T.A. come around.

Despite the devs giving you unlimited chances of saving, you can hit some roadblocks in trying to defeat bosses and enemies in a quick fashion.

Take a trip back in memory lane and challenge yourself in the world of B.I.O.T.A. with its nice pixel graphics. Although some gamers might get turned off by the color palettes the game offers as it can be eye-straining.

Not to mention the casual photosensitive flashes that might give you a bit of a headache the longer you’re immersed.

We hope you enjoyed reading this B.I.O.T.A. review. If you’re undecided to get this game, you can try out the demo on Steam. But if you’re a retro gaming fan, this game definitely deserves to be part of your library.

What did you think of our B.I.O.T.A. Review? Share your thoughts in the comments below.

This review is based on the PC version of B.I.O.T.A. The key was provided by Retrovibe.

Load more
B.I.O.T.A. Review: A Trippy Retro MetroidvaniaWith plenty of characters to choose from, a good variety of biomes, and different combat platform mechanics, B.I.O.T.A. gives a great modern remake to retro gaming. Though the game isn't really built for long sessions due to some palettes giving away a bit of a headache the longer you play, its immersion is just enough for you to enjoy the game.
Tech