Boots of the Assembler: New Warlock Exotic in Destiny 2 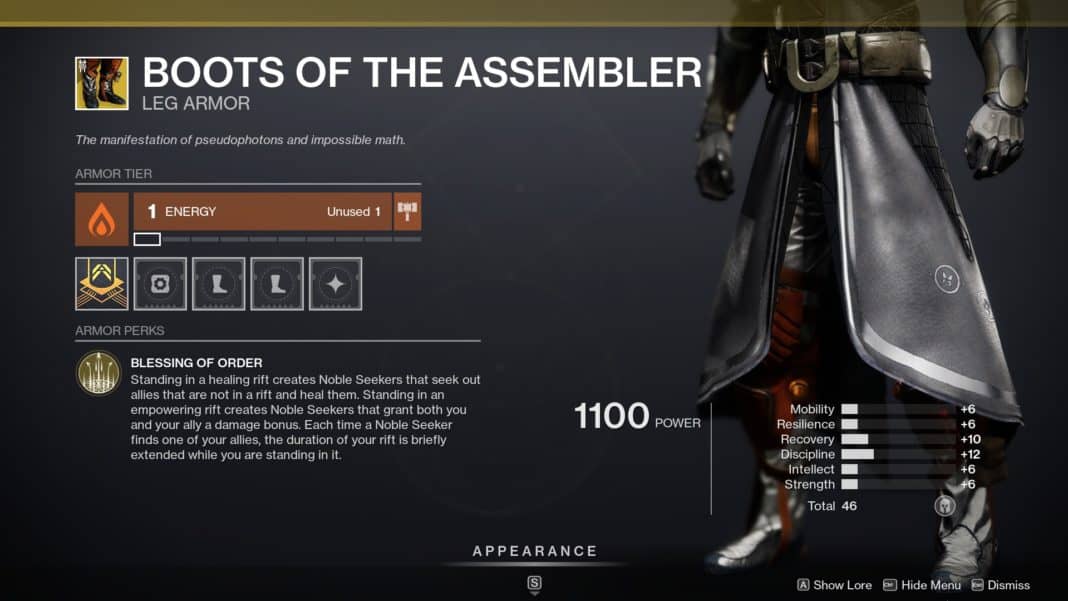 Destiny 2: Season of the Splicer launched on May 11th this year. Season 14 of Bungie’s award-winning game introduced three new Exotic armor pieces, one for each of the three classes. Boots of the Assembler is the new Exotic leg armor for the Warlock.

What is the Boots of the Assembler Exotic in Destiny 2

The Boots of the Assembler has an intrinsic perk called Blessing of Order that buffs the Warlock’s Rift class ability.

Depending on what type of Rift you have equipped, this Exotic buffs them in different ways if you stand on it:

The duration of your Rift is extended each time a Noble Seeker reaches an ally Guardian.

Here are the Armor 2.0 stats for Boots of the Assembler. This is the default roll that can be pulled from your Collections tab once you have unlocked this Exotic.

Pray to the RNG gods that your Boots of the Assembler drops with a high-stat roll. Recovery is the most important stat for the Warlock since a higher amount means a lower cooldown for your Rift.

Now you know what the new Warlock Exotic leg armor is all about, it is time to learn how and where to farm it.

How to Get the New Exotic Leg Armor in Destiny 2

The current way to unlock the Boots of the Assembler in Season 14 is through solo completion of Legend and Master Lost Sectors. These rotate each day between the following patrol zones: Cosmodrome, EDZ, Europa, and the Moon.

Note: If you want to farm for the Boots of the Assembler, make sure that the daily Exotic drop for the Legend and Master Lost Sector is Legs.

The Legend Lost Sectors have a recommended light level of 1310. They are much easier to access by players at the start of the season.

On the other hand, Master Lost Sectors suggest that you have at least 1340 power level before trying them out.

The Master Lost Sector is more difficult to complete solo. However, the Exotic rewards are much more likely to drop after every run.

If you want to catch up with the power level grind quickly, check out our Destiny 2 leveling guide here.

The Boots of the Assembler is an excellent choice for Warlock users who love to run full support builds. This is the first Exotic armor piece that directly heals allied players. Furthermore, it is the second Exotic item with healing capabilities after the Lumina Exotic hand cannon.

If you prefer to run solo most of the time in Destiny 2, then there are other more effective Exotic armor pieces available. The Boots of the Assembler works best for Warlocks that play high-level content with a fireteam. Pair it up with the Lumina and your allies will forever thank you for the constant healing!

Sifu File Size and Trophies Revealed for PS4 and PS5