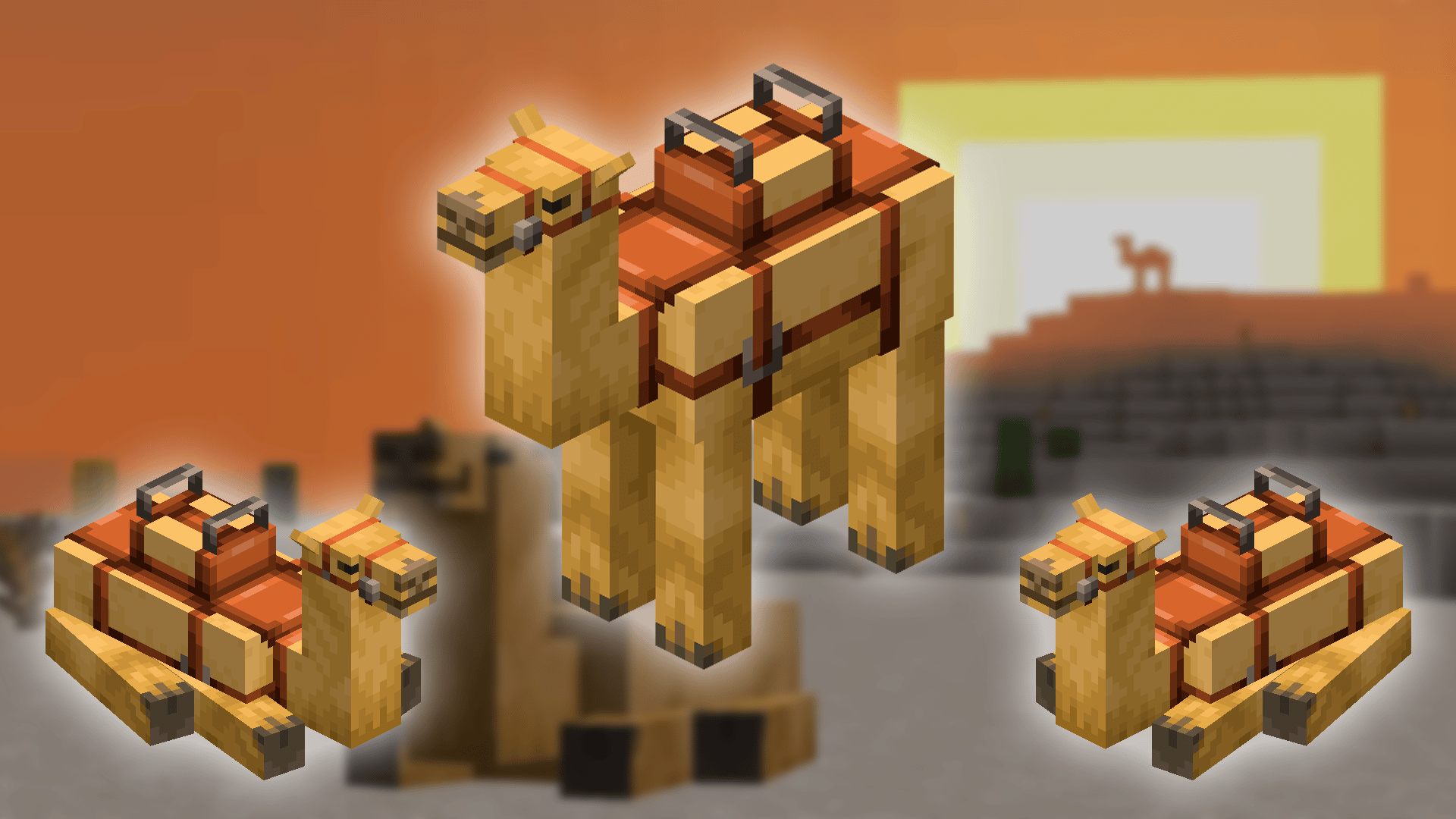 Camels were introduced to Minecraft during the Minecraft Live event on the 15th of October, 2022. They’re a new mob that allows players to mount them and get around faster – think of them as tall horses but different.

Of course, since camels have been released in experimental snapshots, the community has tons of questions. So we conducted some tests and listened to other players to compile this guide on camels in Minecraft 1.20.

Camels are the new desert-faring mounts that stand tall against players and mobs. In fact, camels are so tall that other mobs and players that use melee attacks won’t be able to harm you while riding the Camel.

The new animal is cute and derpy simultaneously – with attractive features and absurd jumping animations. In addition, this passive mob doesn’t require training; instead, just a saddle to ride on, which means there’s no training required.

The Camel is already out in Snapshot 22w42a and available to all Minecraft players who are ready to test the new Minecraft 1.20 features.

Where to Find Camels in Minecraft 1.20?

As seen during Minecraft Live and Mojang’s blog post, players will find camels around desert villages. However, you’ll only find one Camel per village, and they’re usually grazing around the village center. Their scarcity makes them less available than horses and a mount to capture when found.

The spawn rate and exact location of the Camel are subject to change as the developers work on the new Minecraft 1.20 features.

What Do Camels Eat In Minecraft 1.20?

Considering that Camels are so rare, there’s no doubt that players will want to breed them in-game. However, to do so, we need to know what Camels eat. As stated during Minecraft Live, Camels are the first mobs to eat cacti from the desert biome.

However, it’s exciting to see what else the Camels could eat, for example, prickly pears that might show up later in the Minecraft 1.20 update.

How to Breed Camels in Minecraft 1.20

To breed Camels, and the only way to get a baby camel in survival, you’ll need to feed two adult Camels with Cactus plants. After doing so, just like any other passive mob, a baby camel with spawn.

Also, note that the only way to find two adult camels is to find two separate desert villages. As there’s one Camel per village, this might take slightly longer than expected.

How to Ride a Camel in Minecraft 1.20

To ride a camel in Minecraft, simply right-click on the mob, and you’ll hop on. Unlike horses, the Camel won’t throw you off. However, to control where a camel walks, you’ll need to equip it with a saddle.

Camels are the only mounts that don’t need to be tamed or coaxed with food. Considering that camels can only be found in desert villages, we can say that perhaps the villagers tamed the camels for us.

There is, however, one thing to keep in mind: Camels are grumpy.

The mob will randomly sit down, even while riding. Even worse, once the Camel is sitting, it’s challenging to convince them to move again. On the other hand, camels sit, on average, two to seven seconds before getting up, so good luck.

Why Choose a Camel as Your Next Mount?

So why choose a camel as your next mount? Surely they’re an odd animal to take into battle? Well, there are a few factors to consider when deciding if a camel should be your next mount:

At 2.375 blocks high and 1.7 blocks wide, melee mobs have no chance of reaching you while mounted on a camel. This is particularly helpful when avoiding husks in the desert. However, watch out for skeletons, spiders (as they jump), and creepers.

Of course, Ender Men are still the bane of our existence and will still be able to reach you.

Introducing the first dual riding mount, the Camel can be ridden by two players simultaneously. Not only does this reflect actual camels, but it allows for the fantastic mechanic of one-player steering, and, in contrast, the other player participates in combat.

That said, camels are combat friendly and are excellent in PvP servers and other multiplayer games. Besides allowing for agile combat, camels blend in with the desert environment.

Additionally, just like the mobs mentioned above, it’s likely that most players on foot won’t reach you. However, this doesn’t mean your Camel is invincible.

To heal your Camel, feed it with cacti. They’ll heal by 2 health points per block of cactus. They will also heal independently, but this is a slow process.

Camels can simply walk over blocks that are 1.5 blocks high. This means that camels can quickly clear walls and fences without jumping. They’ll also walk over anything one block high, which is convenient.

Lastly, camels have a rechargeable book called dash. Doing so will cause the Camel to leap over several blocks – up to 12 blocks (unverified). With camels, you’ll be able to clear ravines with ease.

Keep in mind that the dash has a 2.75-second cooldown.

It’s about time that Mojang brought us a new mount – the last being the strider in the Nether Update. We’re excited to see players develop unique ways to use camels and incorporate combat styles.

It’s important to remember that camels are still in development and might have some bugs. We’ll also likely see some changes before they’re finalized. To keep up with all Minecraft 1.20 and other camel updates, follow us on Twitter.

What are your thoughts on camels in Minecraft? Let us know in the comments below.