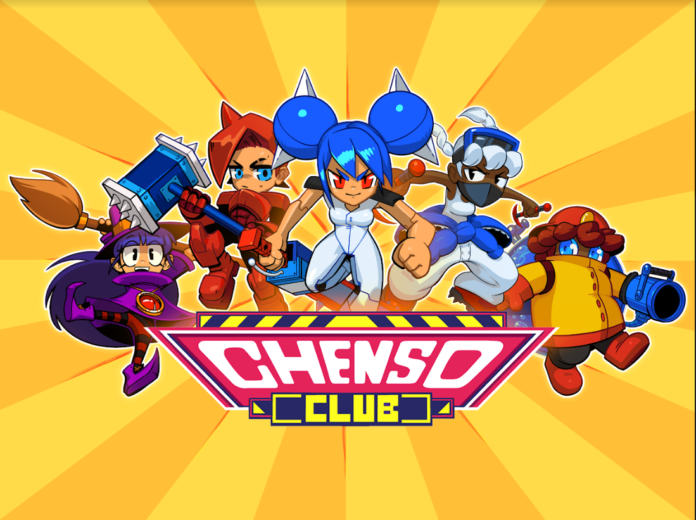 Chenso Club is the latest action roguelike 2D platformer from Pixadome – an indie game company from Sweden. The game is published by Aurora Punks and Curve Games – the publisher of Lawn Mowing simulator, Ascent, and other exciting titles.

This game sets you off as the savior of humanity as aliens try to conquer the world. Use your chainsaw and hammer, and take the aliens’ life forces to aid you in your battle.

Chenso Club is coming out to Steam this September 1. Now, is it worth getting? Find out through this review.

Chenso Club is reminiscent of the classic pixel-style arcade games such as Contra, Celeste, and Dead Cells. The pixel art looks great, and the colors are well-balanced – no design conflicts with each other.

The overall environment layout looks excellent as well. The game feels dynamic despite emulating a classic platformer look since the background elements are constantly moving.

The characters, Blue is a well-designed character with a lot of charm. Her tiny chainsaw compliments her look and breaks the blue and white monotony. Her colors reminded me of Megaman, which is not bad since it means that her overall design is top-tier.

The movement animation looks smooth. It does not feel sluggish, and I have not experienced any stuttering or noticeable frame errors while moving. The regular attacks look great, and the unique attack animation is fantastic.

There is nothing much to say when it comes to the audio department. It simply works wonders in providing an immersive gaming experience. The background music sounds are common for a 2D-platformer title, but the developers could not deviate from that, or else the overall sound would feel out of place.

Every hit has a sound effect, and every movement has one as well. It does a great job of providing an audio cue of what I am doing in-game.

Chenso Club has fun and challenging gameplay. For platform newbies like me, it is a little too challenging sometimes, and I had to repeat some levels to move forward. However, if you are already a fan of 2D platform games, you will easily go past the earlier levels.

The game immediately introduces you to Blue – an Android who finally got activated after an Alien power transferred to her. With that, she gained the necessary skills to ward off the alien invasion. Besides Blue, there are other unlockable characters as well, and I will not spoil their names or skills.

Chenso Club also has a co-op feature as well. You may plug in another controller and fight aliens with your friend or family. However, I was not able to test this feature as I didn’t have anyone to play with at the time of the review.

The minions or aliens are easy to defeat using regular attacks, but there are more powerful aliens that need a little bit more button-mashing. The good thing, though, is that the special attacks change depending on the buttons you press. You have the option for aerial special attacks or zoom through platforms and kill anything in front of you.

There are also a decent variety of bosses. Some are tough, while others can be defeated through a different method. For instance, you would encounter a boss where you have the choice to play a game or to fight its alien minions. The choice is yours.

Chenso Club is not hard to figure out since the game is very linear. It is challenging, though and the roguelike elements make it harder as you progress.

You need to be careful with every level since dying would bring you back to the start. Now, this part is tough since you need to plan your route while fighting the aliens. Since there is no quick escape option, death is knocking right around the corner. I cannot remember how many times I died trying to evade an alien and falling through a platform because I already used my dash. It is frustrating, but it is part of the fun.

There are several game options too. You may opt for the story mode if you want to know more about the narrative, the casual mode if you are a platform first-timer, and the normal mode wherein you are expected to have some platform game experience. This is a good move from the developers as not everyone has the liberty to grind the game.

I highly recommend playing Chenso Club with a controller. The movement feels smoother if you use one, and the attack combinations can be better executed through a controller.

It is not like other games, though, where you only need to smash buttons, and you are good to go. You need to plan out your attacks since there are no escape options except for the dash. Use it once, and you are a slice of dead meat.

You may use the D-pad or the right thumbstick to move and the buttons for the attack, special attack, jump, and dash.

The only downside is that sometimes the game would not register the button I pressed. Hopefully, a future patch can address this.

The Chenso Club ticks the right boxes for an action roguelike 2D platformer. The game is challenging, which is a must for roguelike games. The game will babysit you for the first few chapters, but you are on your own for the rest of the game.

The controls have a bit of a hiccup and could have been better, but it is not bad. The gameplay, visuals, audio, and story outweigh the problems I encountered.

Who is this game for?

Chenso Club is perfect for seasoned platformer gamers, but that does not mean it will not work for beginners. Beginners must play the game more and get used to its controls and gameplay. The fun starts to kick in once you are used to it.

That is it for our Chenso Club review. It is available on Steam, PlayStation 4, Xbox One, and the Nintendo Switch.

This review is based on the PC version of Chenso Club. The key was provided by Renaissance PR.

Load more
Chenso Club Review: Lively Platformer Worth PlayingChenso Club is a 2D platformer with roguelike elements from Pixadome. Use chainsaws, hammers, and the aliens’ own life force against them to claim victory.
Tech