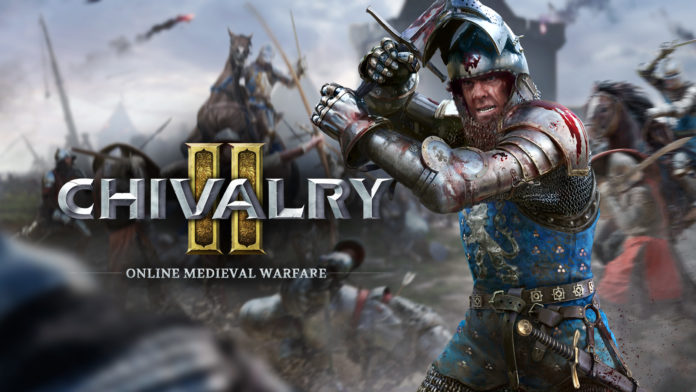 Chivalry 2 is some of the most chaotic fun you can have in any game that’s out right now. But if you’ve played the first, then you already know that. For all you loyal fans who’ve waited for over 8 years for this, you can rest assured that Chivalry 2 stays faithful to the formula; in fact, the developers just decided it’s a good idea to up the ante on this one. But for everyone who’s unfamiliar with the games then you’re in for a wacky surprise. This Chivalry 2 Review is aimed more at those late to the party and not entirely sure what to expect.

Chivalry 2 Review: What is it?

Chivalry 2 is a war simulation style of game that’s so close to being Totally Accurate Battle Simulator yet so far. The game drops you in 64-player team-based multi-stage matches. The objectives change (torch a town, seige a castle, or breach enemy lines) every stage, but the game stays the same.

It’s the sheer chaos of the battles is that makes them so god damn unpredictable. One match you’ll find an enemy shield chucked at you out of nowhere, the other you’ll be wiggling in the air across the map by a trebuchet.

But don’t let all that silliness throw you off, Chivalry 2 is a hard skill-based game. Sure in a 64-player map it is very likely you die by no fault of your own, but that’s just part of the experience. But from picking your weapon to executing any of over 10 unique neck-bending melee maneuvers, duels in Chivalry 2 can get intense.

Obviously, this Chivalry 2 review is written from the POV of an absolute noob. I don’t have the hundreds of hours needed to master the game, sorry. Still, the game is enjoyable at every skill level (in drastically different ways).

There is a lot to love about Chivalry 2. The soul of the first game lives on; you can still feel that the game was built by a bunch of gamer-modders who want to make something, above all, fun. Yet still, Chivalry 2 miraculously feels more polished than its predecessor.

Fun at every level

When you play an FPS or a multiplayer survival (like Cryofall or Remnants) you’re either good enough to have fun or you’ll get rolled without mercy. In Chivalry 2 it’s different. Even at the lowest skill levels, your stray sidearm axe flying into an enemy’s face is terribly fun.

If you’re so bad at the game you struggle with basic movement, roleplaying is enough fun to keep you going. If you’re naturally talented or you’ve invested hours into the game you’re still sure to enjoy Chivalry 2’s unbelievably deep combat system. Your weapon swings in this game are not rigid; moving your camera affects your attacks and players (yourself included) are not just a rectangular hitbox. Aim your polearm correctly, make the right movements, and you might – if you don’t get nailed by an arrow – pull off a replay-worthy kill. It’s not Mordhau-level deep, but don’t you sleep on Chivalry 2.

Basically, skilled players can enjoy the game’s tough mechanics, while newer players can just enjoy the pure hilarity of every match.

Just enough of the right kind of humor

Speaking of hilarity, Chivalry 2 carries on its predecessor’s legacy with the perfect amount of crude humor. You would not expect a game with such a high skill-ceiling to have such low humor, but it does.

Chivalry 2 is a game with a semi-realistic combat system and some serious physics. You can dodge attacks by actually dodging and not just barrel-rolling forward. And yet, there is a dedicated button for roaring into battle and complete voice lines for “your mom” jokes. Chivalry 2 flips between serious and absurd so abruptly and so naturally, and I think it’s glorious

In the end, Chivalry 2’s brilliance is in how it prioritizes fun over any technicalities. Yes, like any other multiplayer game you’ll find yourself tabbing to check your KD. However, I found my most memorable games not the ones where I absolutely smashed, but the ones where I pulled off the most ridiculous shenanigans.

There is a deep attention to having a good time in Chivalry 2. Bonking an opponent on the head with a blunt (or a makeshift) weapon feels so satisfying even if it isn’t all that effective. And so is taunting your opponents in an open field at the cost of your life. In either case, the punishment does not feel severe and you’ll likely do it again.

‘Tis But a Scratch

But to call Chivalry 2 a polished game without footnotes is to insult it. For Chivalry 2, janky is high praise – for better or for worse. It’s just a part of the experience. That said, sometimes the quirkiness is just a touch too much.

There is no sugar coating it, Chivalry 2 is buggy. It’s to be expected but it can be annoying all the same. Smashing your enemies flying into the air is a fun bug, but getting spawned into a wall and immediately dying is not.

During my playthrough I’ve had a few matches ruined by weird glitches. One time I killed myself on a wooden pole, another time I failed to spawn entirely; it’s a coin toss. But overall, it was alright.

64-player maps and crude emotes make both the most and least social experience possible. There is no reason or rhyme to how games go in Chivalry 2. Although you are surrounded by tens of players on your team, teamplay is kind of non existent. It’s the game’s very spirit of reckless fun that makes people so eager to just go around and randomly die solo. That’s not bad per se; I, too, was more interested in mindless fun than taking objectives. However, it comes at a clear cost; the game is too casual for its surprisingly deep mechanics.

Chivalry 2 is stupid fun. That’s as in stupid and fun. I had a blast with over 10 hours playing this game. Because of the massive multiplayer aspect, every match is a new experience so it won’t get stale after a couple of maps.

This game is all about fun. It’s casual enough for anyone to enjoy, and deep enough to keep the KDA enthusiasts going. Whichever kind of player you are, you’ll find loads of nonesensical gorey fun to be had with Chivalry 2.

This Chivalry 2 review was based on the PC version of the game. However, you can also play it on PS4 and PS5 as well as Xbox One and Series X|S.

This review is based on the PC version of Chivalry 2. The key was provided by Tripwire Interactive

Gigabash Review – A Kaiju Brawler On A Rampage

Load more
Chivalry 2 Review: Mindless Medieval MayhemChivalry 2 is all about having a good time. It's casual enough for anyone to enjoy and deep enough to keep the KDA enthusiasts going. Whichever kind of player you are, you'll find loads of nonsensical gory fun to be had with Chivalry 2
Tech