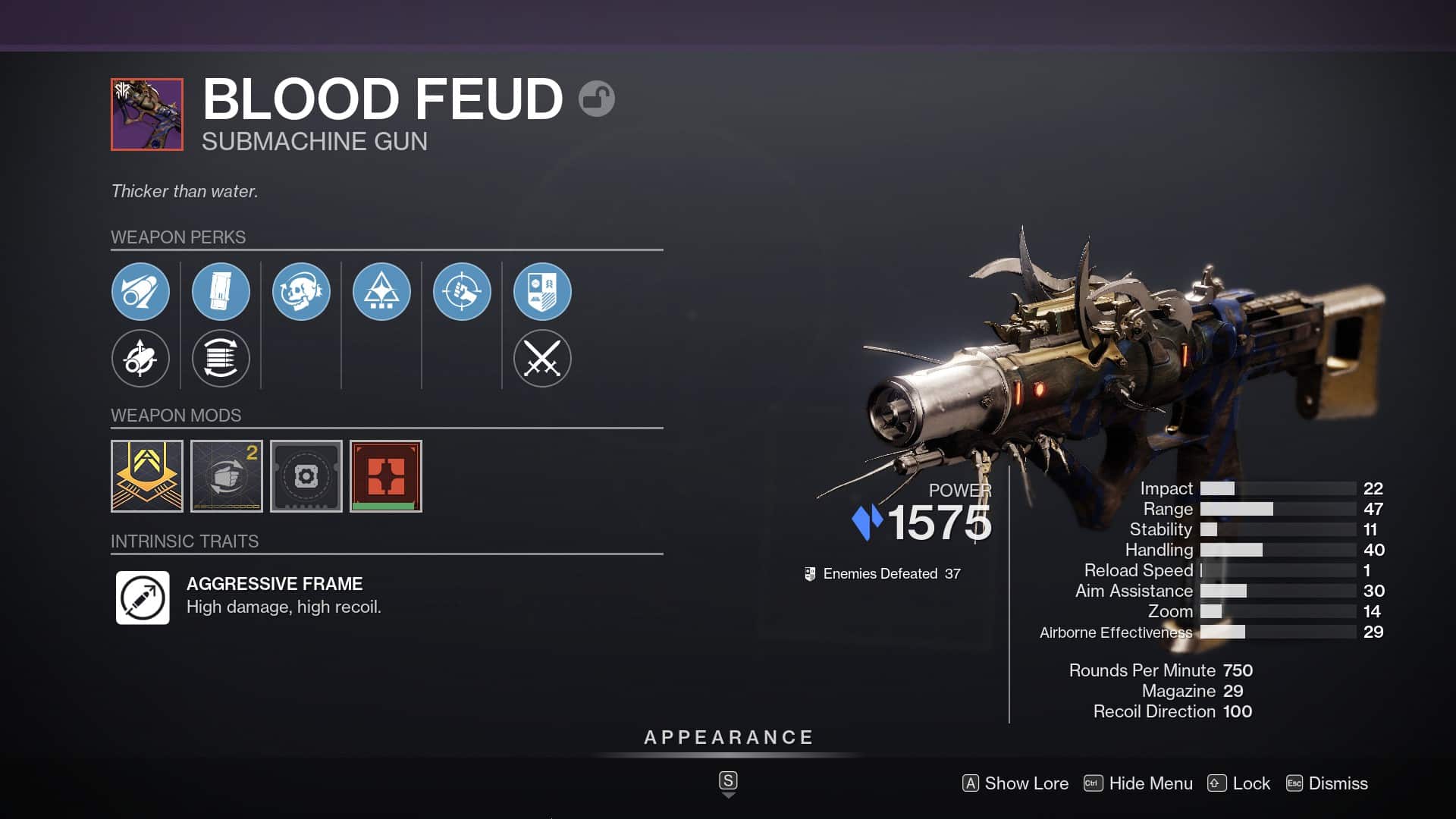 These two Destiny 2 Blood Feud god rolls are interesting. In PvE, Blood Feud has a couple of ridiculously powerful rolls. So powerful, that the weapon would be a Destiny 2 META staple if not for its terrible base stability. In PvP, though, it struggles, again becuase of its stability.

The base stats of Blood Feud really let it down. That’s why I’m spending a good portion of these god rolls perks on trying to compensate for that. It’s rare that I even mention masterworks in a Destiny 2 god roll guide, but getting a stability masterwork on this thing will go a long way toward making it usable.

With that being said, here are my two (technically three) Blood Feud god rolls. At the very least, this is a very viable weapon in PvE. In the Crucible though, well, you can be the judge of that for yourself.

This Blood Feud god roll features a perk combination favorite of mine. It’s nice when a weapon not only rolls with an S-tier perk in each column, but has those S-tier perks synergize with each other as well as Grave Robber and Swashbuckler do.

Before that, I need to touch on the choice of using Polygonal Rifling over something like Arrowhead Break or Fullbore. Sure, you could use either of those alternatives if you want. However, keep in mind that Blood Feud’s stability is absolutely abhorrent. There’s no point in having a bunch of range if you can’t actually hit what you’re aiming at. That’s also why I’ve gone with a stability masterwork. In my opinion, compensating for Blood Feud’s low stability is more important than loading up on range.

That’s not to say we can ignore range entirely. I’m still using Accurized Rounds in my second perk column, as I would with any other SMG god roll. A flat +10 to range with no drawbacks is too good to miss. Plus, we’ve substantially improved our stability with Polygonal Rifling and our masterwork, so we can afford the range here. If you don’t have a perfect 5/5 roll, consider swapping out Accurized for something that helps bump that stability up a bit more.

Okay, that’s all the boring but important stuff. Now, we get to talk about the Grave Robber/Swashbuckler combination. In days past, I hated Grave Robber. I’ve always been a Hunter main, and a Void one at that. So, I never, ever, used my melee in any meaningful offensive way. However, once Solar 3.0 dropped and I made the infinite Hunter melee and Radiant build, my opinion on Grave Robber changed dramatically – especially since the Calus Mini-Tool god roll included it.

With Grave Robber, our melee kills reload our magazine. With Swashbuckler, both melee kills and regular weapon kills increase our weapon’s damage, up to 33.3% at five stacks. Now, with perks like Swashbuckler and Adrenaline Junkie, it’s typically reloading that causes you to lose your stacks. However, melee kills keep Swashbuckler active, and reload your weapon thanks to Grave Robber, so there’s no reason you shouldn’t be able to keep max stacks up almost 100% of the time you’re in combat – especially with a melee-focused build.

Now, I’m still a Void Hunter main, so using my melee offensively isn’t ideal – it’s a utility tool to grant Invisibility. So, this Blood Feud PvE god roll isn’t going to do much for me. Well, if you’re not big on melee builds, or you’re a Stasis main, there’s a second S-tier god roll on this SMG in the form of Triple Tap/Headstone. You don’t need me to tell you why this is a T1 roll – Triple Tap gives you bullets back for precision hits, and Headstone generates Stasis shards on precision kills. The synergy speaks for itself.

The only reason I’m arguing that the Grave Robber/Swashbuckler Blood Feud PvE god roll is slightly better is that hitting those precision shots isn’t the easiest thing in the world with this weapon. Still, for a seasonal sub-machine gun, it’s got a whole load of potential worth exploring.

Blood Feud isn’t built for PvP. I know that SMGs are a popular Crucible option, but you’d struggle to hit the broad side of a barn with this thing. On top of that, Blood Feud doesn’t exactly have any perks that scream PvP god roll to me. Still, I’ve done the best I could with the options on offer.

First and foremost, I would argue that getting some stability-buffing perks in columns one, two, and as your masterwork is far more important here than it was for the PvE god roll. I’m still keeping Polygonal Rifling and Accurized Rounds, but you could substitute the latter for something that gives even more stability – you really can’t get enough of it if you’re planning on taking Blood Feud into the Crucible or Trials.

In line with that thinking, I’m using Dynamic Sway Reduction in slot three. There are no real S-tier PvP perks in column three, and Dynamic Sway Reduction grants us a big ol’ chunk of accuracy and stability for free – all we have to do is fire to trigger it. Compared to the other column three perks, the majority of which have kill-based activation triggers, this is a clear god roll top-choice.

It’s generally impossible to recommend Elemental Capacitor for Destiny 2 weapon god rolls because its effect is based on what subclass you’re running. However, the combination of there not being many great alternatives, and the fact that using Void with it grants +20 stability, makes it my top choice. The other subclass benefits are also great, but if you want to make the most of this roll, you need to run Void.

This Blood Feud god roll, with a Void subclass, gives us over 60 stability while we’re firing. That’s a massive improvement over the weapon’s base 11 stability and makes it somewhat useable in PvP. Still, it’s not going to be replacing Funnelweb anytime soon.