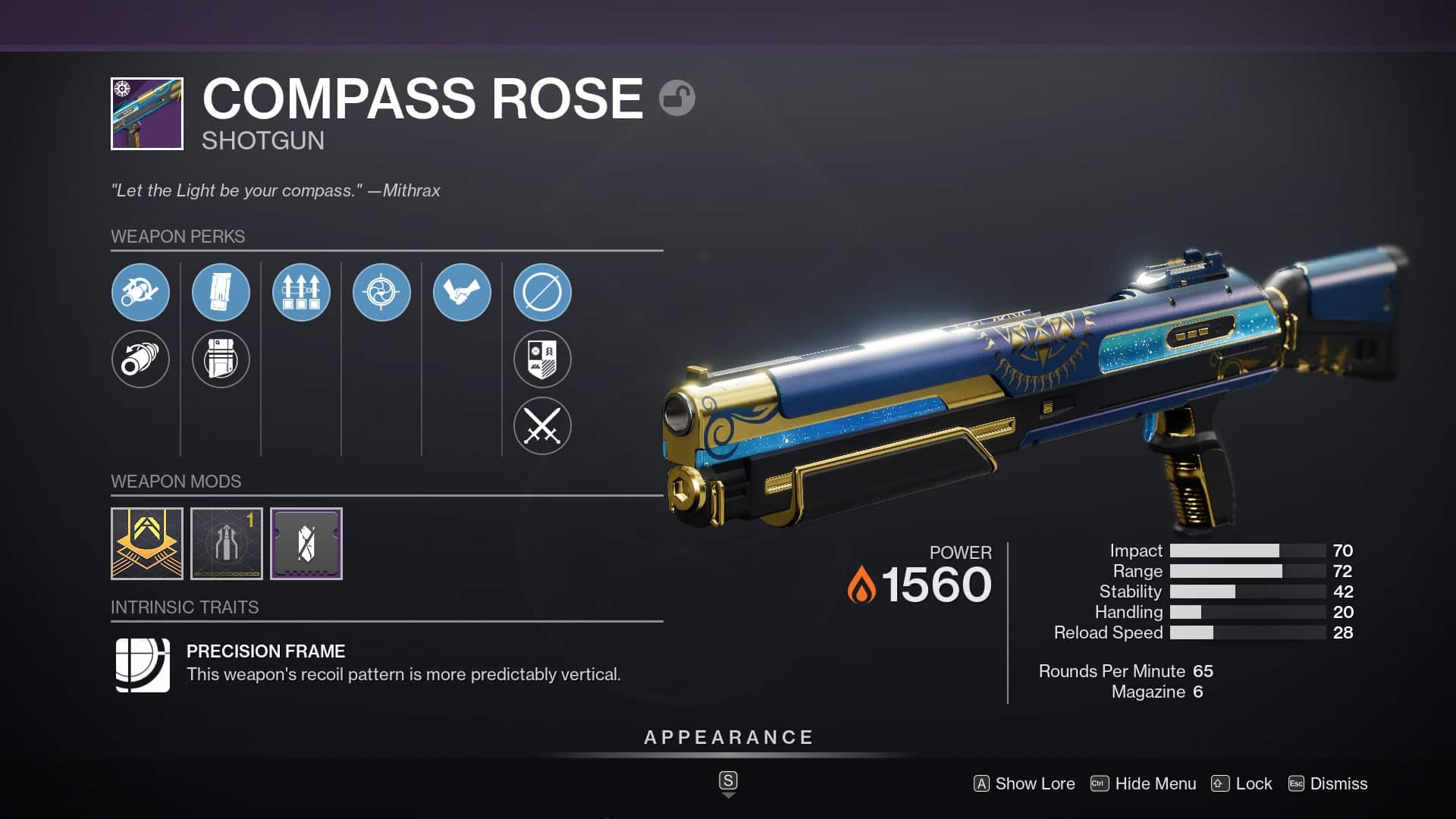 These two Destiny 2 Compass Rose god rolls are deceptively effective. Most people will overlook this brand new Solstice shotgun, but I think that’s a mistake. It has a handful of perk combinations that could make it a genuine META contender and I wouldn’t be surprised to see more people using it in the coming months – at least in PvP.

I’m going to dive into both of these Compass Rose god rolls in depth. I’ll take about what makes each of them tick, and why I think it’s one of the most slept-on weapons in the game right now.

So, if you’re curious about what Destiny 2’s newest shotgun has to offer, check out these two Compass Rose god rolls.

I’m one of the very few non-Titan players that loves a shotgun in endgame PvE. I main Void Hunter, so I always have invisibility at my disposal, making getting into shotgun range very easy even on Grandmaster Nightfalls (although you should never take a shotgun into one of these). With that in mind, I have to say that I LOVE this Compass Rose roll. If it was Kinetic, it would be one of my go-to weapons. However, I would not recommend it to anyone. At all. Shotguns are not META in PvE unless they’re being used to wombocombo with a melee Titan build. Just because I like weird things doesn’t mean you should. I run glaives at endgame, too.

In PvP, a shotgun’s range needs to be at around 70 to maximize efficiency. In PvE, I like having as much range as possible, so I may have gone a little overboard with Smoothbore and Accurized Rounds. A lot of people don’t like Smoothbore because of how it affects the weapon’s pellet spread, but PvE targets are often big enough that it doesn’t make a difference – but the increased range does.

I use shotguns as a quick way to deal with chunky Majors and yellow bars. These enemies almost always have shields of some kind, making Turnabout a surprisingly effective perk. It grants the user an overshield whenever they break an enemy’s shield – which is the weapon’s main use case. Having that overshield at close range is a lifesaver.

For me, Turnabout combos with Trench Barrel exceedingly well. Traditionally, Trench Barrel is an S-tier PvE perk that enables some of the aforementioned shotgun/Titan wombocombos, but I use it to combo with my Hunter’s Smokebombs.

The weapon is extremely effective at what it does – I go invisible and get up close to a Major. Then I throw a Smokebomb on them to disable them and hit one melee attack. Turnabout gives me an overshield when I fire, and the damage buff from Trench Barrel is active. It only takes two or three shots to kill most enemies, at which point I get my invisibility back because I killed an enemy affected by my Smokebomb. It’s a combo made in heaven.

That being said, it won’t work that well for everyone. Even still, I think this is the definitive Compass Rose PvE god roll. Someone might argue that Incandescent is a better choice – but that’s an AD-clear perk and shotguns are not AD-clear weapons, so bear that in mind if you decide to use a roll of your own.

PvP is where Compass Rose really comes into its own as a META contender. That shouldn’t be too surprising on account of it being a shotgun. Beyond that, though, it has a particular perk combination that makes it genuinely viable at the top levels of play.

I’m keeping Accurized Rounds from the PvE roll, but I am replacing Smoothbore with Full Choke. Accurized Rounds is enough to push the weapon’s range up into that 70+ bracket, so there’s no need to go all-in on a range-based barrel. Instead, Full Choke is going to tighten up our pellet spread and make getting one-shot kills significantly easier.

Looking at all the potential perk rolls, it’s clear that the only real Compass Rose PvP god roll is Quickdraw/Snapshot Sights. These two perks are up there with Opening Shot as the best shotgun perks in the game.

Quickdraw is going to let you pull the Compass Rose out insanely fast – something incredibly important in Crucible as you need to quickly adapt to the changes in range during a gunfight.

Snapshot Sights synergizes with that incredibly well as it increases our ADS speed. Going from your primary weapon to ADSing with this shotgun only takes a fraction of a second, and that’s a gamechanger when it comes to how you approach a lot of PvP scenarios.

I don’t think that Compass Rose is going to be at the top of the PvP META, and I don’t see it getting any mainstream use in PvE. However, it is a great alternative to something like a Felwinter’s for anyone looking for a different shotgun to run.