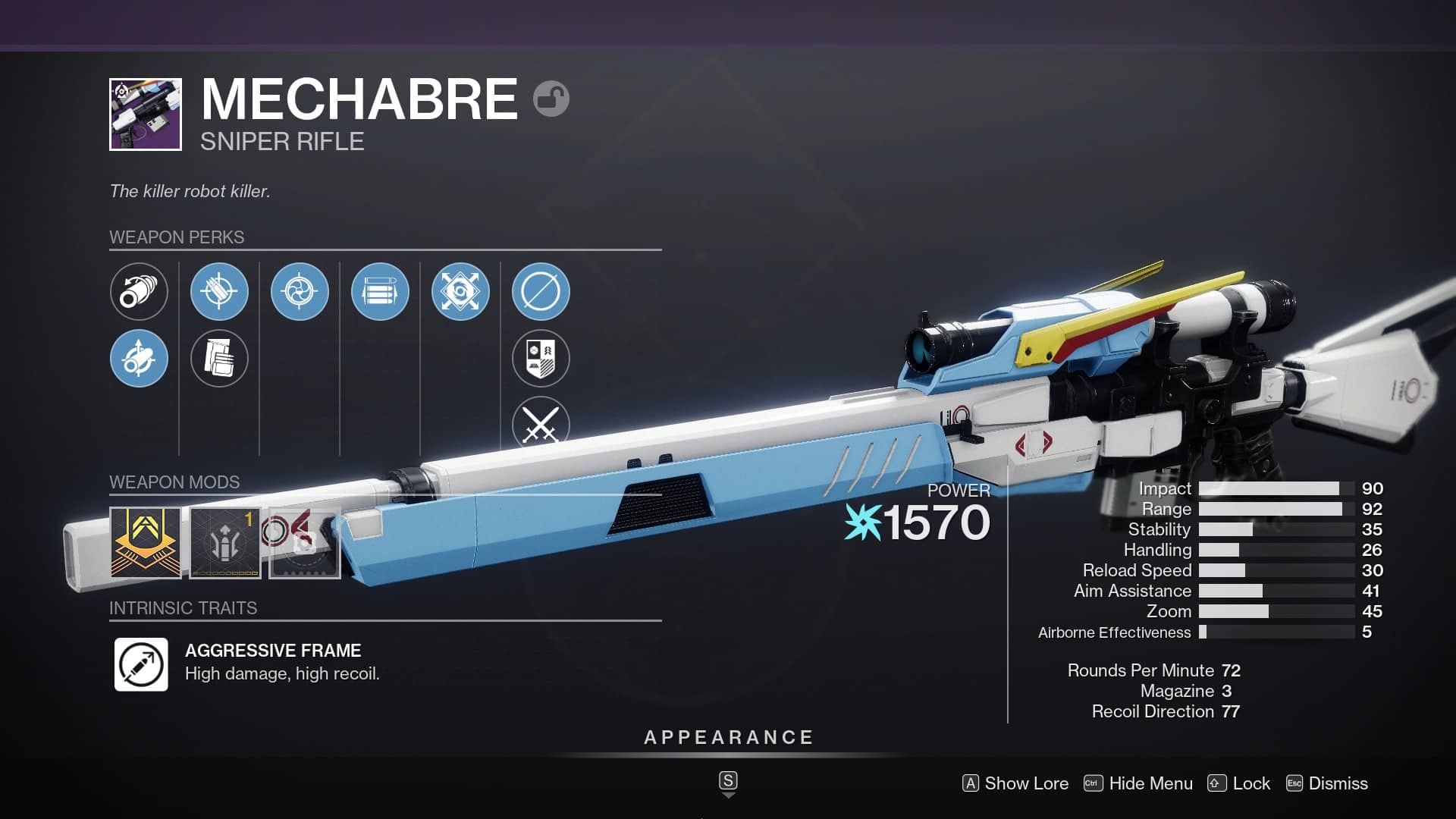 These two Destiny 2 Mechabre god rolls are pretty good – at least, for an Event weapon. It’s a new weapon to Destiny 2‘s Festival of the Lost 2022, and beyond it’s incredible design and aesthetic – has some value to offer. These Mechabre god rolls aren’t going to break the META, sure, but they are a bit of fun to play around with.

I’m going to be breaking down both the PvE and PvP Mechabre god rolls perk-by-perk. I’ll explain why I chose what I chose, and offer up any viable alternative options. Mechabre ain’t going to be around for long – so get your hands on one before it’s too late.

It feels like it’s been years since snipers have been META in any way, shape, or form in PvE. Despite that, plenty of snipers have great god rolls that you’ll want to hunt for – especially since rumor has it that snipers may be in line for a PvE buff. This Mechabre PvE god roll is one such example.

As with most snipers, the barrel you use on this roll doesn’t matter all that much. Arrowhead Break is my go-to barrel 90% of the time, so I’m staying consistent with it here. If you want to swap it out, though, then feel free. Appended Mag, on the other hand, is something of a staple for this roll.

Despite rolling with Triple Tap, the perk is useless on Mechabre. It only has three bullets in its base mag, which means we’re only ever going to get one Triple Tap proc per reload. To combat that, we’re grabbing the extra bullet from Appended Mag, and running Clown Cartridge. This means that we’re guaranteed to always have at least five shots per reload – on par with Triple Tap. More often than not, though, you’ll have six or seven bullets to play with per mag.

To take advantage of all that extra ammo, I’m also running Vorpal Weapon. When it comes to boss DPS weapon archetypes, like snipers, the only real column four perks you want are Firing Line and Vorpal. Firing Line is generally considered to be the superior of the two – but it doesn’t work for solo players. Not that it matters, because Vorpal is the only option that the Mechabre has at its disposal.

Vorpal will give us 10% more damage against bosses. Combine that with a Boss Spec and the extra 3/4 bullets we get per mag, and this Mechabre PvE god roll is going to be able to output some decent DPS. It’s no linear, but it’s not too bad.

Snipers are a PvP weapon in general – and that’s clearly the intention with Mechabre. Not only does it have an S-tier PvP god roll, but you’re given that roll by Eva Levante when you complete Gone but Not Forgotten.

Arrowhead Break is back, as per usual, but I’ve swapped out Appended Mag for Accurized Rounds. The extra range bump feels nice, and we have no need for the extra magazine capacity in most Crucible or Trials games.

Beyond that, you’re going to want to run Snapshot Sights and Opening Shot. It’s a perk combination that feels as old as Destiny 2 itself, and that’s because of how long it’s dominated the META. Every PvP sniper worth its Glimmer is capable of rolling with these two perks, and it’s the roll you want to hunt for nine times out of 10.

Snapshot Sights is going to let us ADS faster – a distinct advantage to have when you’re using a sniper. Opening Shot gives us more accuracy and range on the first bullet we fire. Generally, you only need one bullet to kill a Guardian with a sniper, so we should be procing Opening Shot most of the time – provided you’re hitting your headshots.

With this Mechabre god roll for PvP, you’re going to be ADSing faster, and by extension getting that Opening Shot off faster. Dueling a non-god roll sniper with this thing should result in your win a good majority of the time. It’s faster, and stronger, than a lot of its competition.

Despite being high-tier for PvP, there’s still an argument to be made for using Mechabre in PvE. Sure, the Clown Cartridge/Vorpal roll isn’t going to be getting a world’s first raid completion any time soon, but that’s not your only option. Mechabre rolls with Volt Shot, and that’s worth experimenting with – even if it’s not the most optimal perk on special weapons.