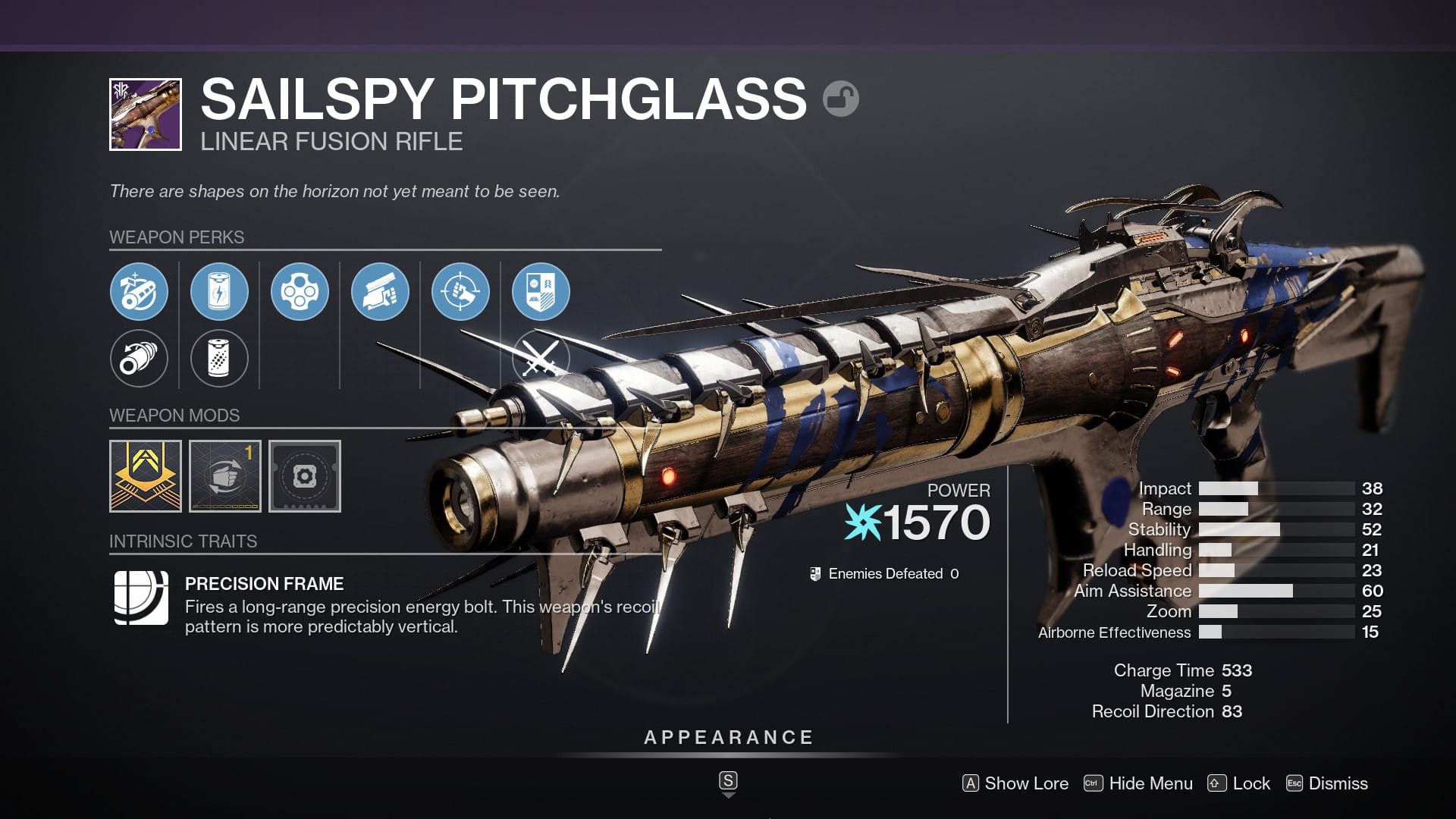 These two Destiny 2 Sailspy Pitchglass god rolls are pretty standard by linear fusion rifle standards. Linears have been kings of the Destiny 2 PvE META for a little while now, and they can certainly hold their own in PvP. The Sailspy Pitchglass is no exception, making these god rolls pretty strong compared to a lot of other weapons in the game right now.

I’m going to break down both of these Sailspy Pitchglass god rolls perk by perk, explaining my choices and why I think certain combinations of perks work well together. These are far from the only god roll options you have – I don’t use Voltshot, but it’s still an S-tier perk, albeit weaker on heavy weapons compared to primaries. So, if you disagree with my perk choices, that’s okay. Think of my Sailspy Pitchglass god rolls as frameworks rather than the definitive best versions of this weapon.

This is a linear fusion roll that should look familiar to almost all of you out there. All top-tier META linears either have this roll, Triple Tap/Firing Line, or a combination of the two. The latter is the more optimal roll, but the Sailspy Pitchglass doesn’t have access to that god roll, so we’re using Clown Cartridge and Vorpal Weapon.

For my barrel, I’m using Hammer-Forged Rifling for an extra bit of range. The range on the Sailspy ain’t great, so we use this perk slot to give it a slight bump in that department. This is arguable the least important perk for this entire god roll, so swap it out if you want to.

After that, it’s a choice of either Accelerated Coils or Liquid Coils. Liquid Coils will give us more overall damage, while Accelerated Coils gives us better DPS. Honestly, which one of these is better changes from boss to boss. If you’ve only got a short DPS phase, you’ll want Accelerated. For long damage phases like Oryx, then Liquid Coils is the more optimal option. Either one will work for this Sailspy Pitchglass god roll, though.

The previously mentioned Clown Cartridge/Vorpal combination is pretty self-explanatory. It’s a roll you should have used, or at least seen, before. Clown Cartridge overflows our mag on reload, giving us at least six shots per reload, while Vorpal gives us 10% more damage against bosses. It’s going to let us get more damage in on bosses, faster, and that’s all you really want from a DPS PvE heavy weapon.

Linears are at the top of the PvE META, and they’re pretty strong in PvP, too. The perks you roll on a PvP linear aren’t as important as their PvE counterparts, purely because the weapon’s archetype is strong without the need for additional help.

Regardless, this Sailspy Pitchglass PvP god roll makes use of Arrowhead Break and Accelerated Coils specifically. Arrowhead improves our recoil direction – making getting off a second and third shot much easier, and Accelerated Coils gives you a faster charge time – meaning you’re getting more shots off faster, and the weapon is much more forgiving if you miss a shot.

Beyond that, I’m using a combination of Moving Target and Heating Up. Moving Target has been a PvP staple for a while now – and for good reason. It gives us more movement speed and target acquisition while we’re aiming down sights. Given that we should never be firing from the hip with a linear, this perk should be active for every shot you take.

Heating Up isn’t the most optimal PvP perk in the world, especially for a god roll. However, pretty much every other column four perk on Sailspy requires you to hit or kill a target in some capacity – making their triggering conditions far too difficult to achieve in the Crucible. Heating Up falls into this category – requiring you to get a kill to trigger it. However, that kill gives you better accuracy, stability, and better vertical recoil. The idea behind using this is that it should make subsequent kills with the weapon much easier to get, as your sights and recoil won’t be as punishing and will be easier to transfer across to other targets.

Overall, the Sailspy Pitchglass is just as good as most other linears in PvE, and while not a top-tier option for PvP, it’ll certainly get the job done.