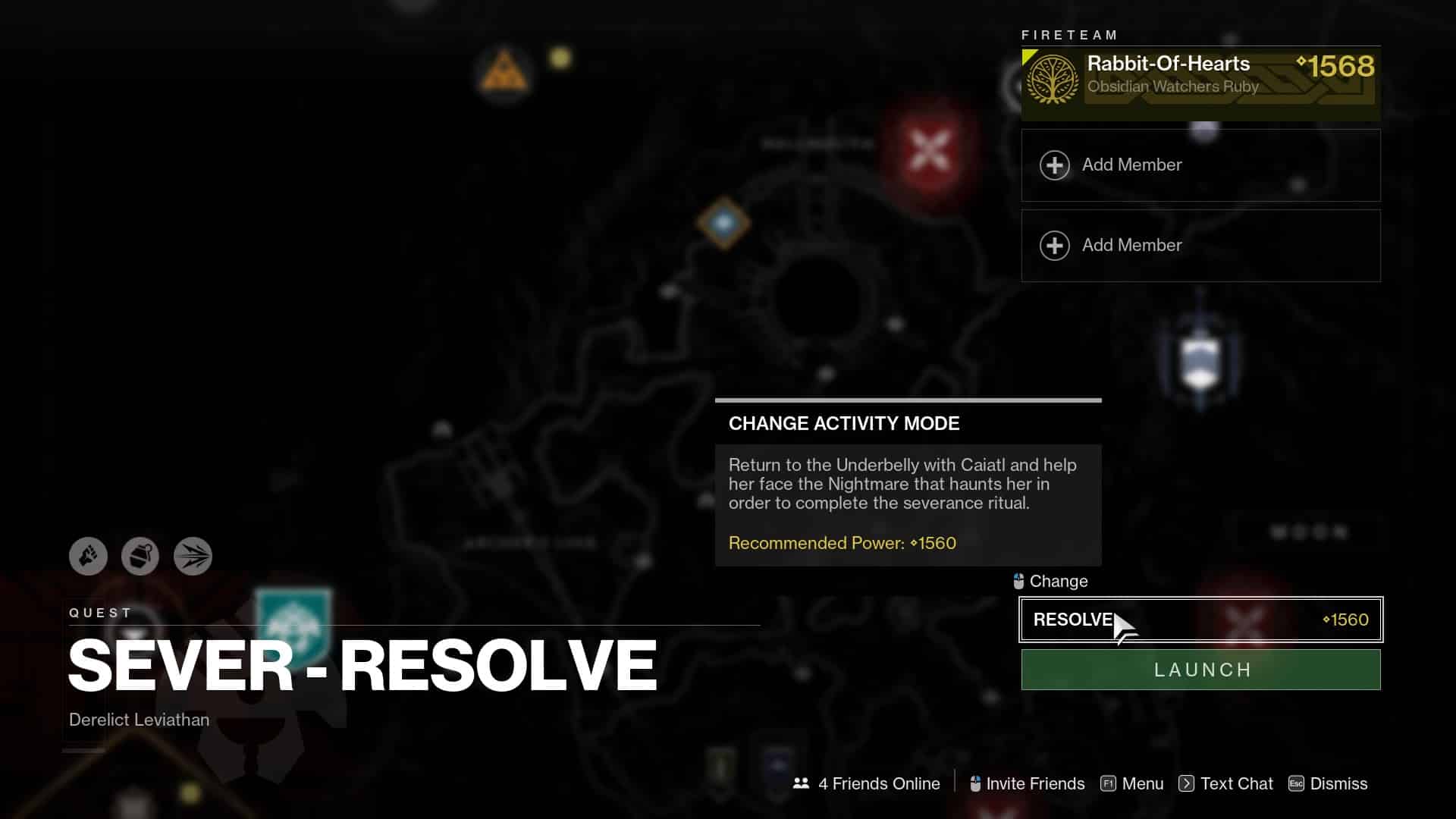 Week six of Destiny 2’s Bound in Sorrow has us completing Sever – Resolve. It’s the last Sever mission, and like last week’s Sever – Rage, is incredibly short. I’m going to run you through how to complete the mission, as well as the location of the Sever – Resolve Bobblehead and Calus Automaton.

So, if you’ve been following Destiny 2‘s Season 18 story, rest assured that you’re almost at the end. All we have to do is help Caiatl purify her Nightmare of Ghaul, then it’s onto the big boss Calus himself. Hopefully.

Clear a Route to the Leviathan’s Engines

When you boot up Sever – Resolve for the first time, you’re going to be met with a familiar sight. Get used to that, because this mission plays out almost identically to Sever – Rage. There are no substantial differences between the two versions of the mission.

So, when you spawn in, follow the linear path through the Leviathan. You’ll be met with Cabal resistance at various different choke points. Clear out the enemies, and eventually, you’ll reach a hole in the ground with a drop.

When you’re above the hole, two Cabal allies will spawn in. Jump down and help them to assault the Leviathan’s Engineering Bay.

After jumping down the hole into the Engineering Bay, a whole bunch of Scorn and Cabal are going to start spawning in. You, along with your two Cabal buddies, need to kill everything.

Your progress in the Engineering Bay will be tracked as a percentage counter under your objective. You don’t need to pay attention to this, though. Just move forward through the area killing as you go and you’ll be fine – just watch out for the Screebs.

Once you’ve secured the area, your Cabal friends will wait by a closed door while you go and place the first amplifier.

When you reach the amplifier site, pay attention to the open door that should be directly in front of you. Place the amplifier, then start heading towards that open door to find the Calus automaton for Sever – Resolve.

When you clear out the Engineering Bay, you’ll be prompted to turn around and place a Ritual Amplifier. When you reach the amplifier site, you’ll be able to see an open door across the bay. Head through that door and take a right – the Calus automaton for Sever – Resolve will be sitting there in the hallway.

Once you’ve listened to the robot ramble on, turn back around and head towards your Cabal allies. Go through the door next to them, and you’ll be greeted by Caiatl and the Nightmare of Ghaul.

When you walk through the door, you’ll be met by Caiatl going on a bit of a mad one. She’s skewered some poor Scorn and is just holding him there like a grisly trophy. It’s actually really cool the first time you see it.

She’ll toss the Scorn down the hole, then have a little chat with you and Nightmare Ghaul. Wait for the dialogue to finish, then head straight down the hole. You don’t need to deactivate any sort of Arc barrier this time.

Keep in mind, though, that you do actually need to listen to all the dialogue. The barrier from last week is active until it finishes, preventing you from moving forward.

When you’ve dropped down, you’ll be in the Ventilation shaft. Like last week, the fans will be on. You need to disable them so that you and your three Cabal allies can move forward – that means heading to the Containment Lockdown.

Jump up to the platform to your right and follow your objective marker through the door. Stop as soon as you’re in the new area, though.

Given that we incinerated the Containment last week, I honestly thought we were going to get something interesting for Sever – Resolve, like a fakeout or something. Unfortunately, we don’t. It’s the exact same process as last week.

So, when you’re in the Engine Room, take an immediate hard right and shoot the fuse above the door. Go through that door and activate the switch in front of you.

When you reach the end of the Immolation Hallway, jump up and activate the switch. The hallway will get blocked off, and if the Containment is trapped in there, it’ll die.

You can then override the lockdown and head back to the Ventilation shaft.

From here, it’s more or less a straight run to the boss fight. Follow your Cabal allies down the Ventilation shaft. Eventually, you’ll reach a wave or two of Scorn. Clear them out, then pay attention to the platform they spawned in on – that’s close to where the Sever – Resolve Bobblehead is located.

After collecting the Bobblehead, or not, proceed forward and you’ll be met by Caialtl and Ghaul again. Plant your rally banner and prepare to activate the Severance Ritual.

In the Ventilation, pay attention to the platform that the Scorn spawn on. When you’ve cleared the area of enemies, stand on that platform yourself and look up to your top left. You should be able to see a raised platform. Hop onto the platform and go through the open door – the Sever – Resolve Bobblehead is located in that room, tucked in the corner behind some debris.

After grabbing the Sever – Resolve Bobblehead and rallying at your banner, you can interact with Caiatl and the Nightmare Harvester to start the boss fight.

To spawn Ghaul in, walk towards the objective marker on your screen. Get close enough, and the fight will trigger. This will lock your Cabal allies outside with a barrier, preventing you from leaving, so try to grab the Calus Bobblehead beforehand.

Like last week, Dominus Ghaul doesn’t have a health gate, so you can sort of just go nuts. Use the barrier around Caiatl for cover, and this fight should be pretty easy.

Just bear in mind that if you’re trying to complete the Sparking Rage seasonal challenge, you won’t be able to pick up the Solar Scythe. If you do, it will invalidate the challenge and you’ll have to start the mission again.

Regardless of how you decide to do it, kill Ghaul and take your loot from the chest. Sever – Resolve will be complete, and you’ll be all done with Sever missions! Congratulations. There’s still one week left of Bound in Sorrow, so if you’re following these guides for the seasonal quest, you’re not done yet. If you’re just cracking through the Sever missions, though, you can rest easy. All the hard work is done.