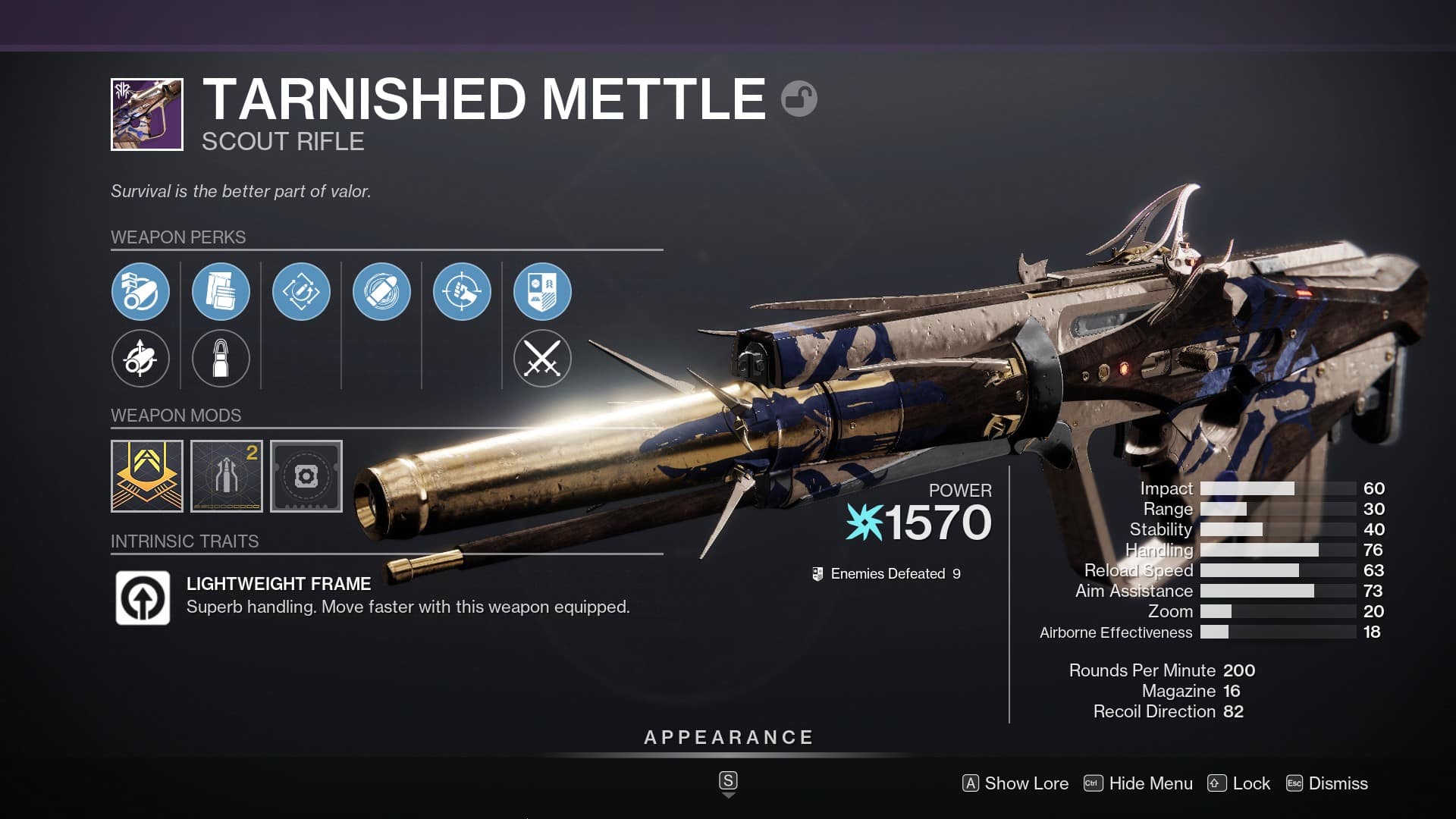 These two Destiny 2 Tarnished Metal god rolls are incredible. Season of the Haunted had the Calus Mini-Tool, and Season of Plunder has the Tarnished Metal. This is easily the strongest seasonal weapon we’ve gotten with Season 18. It’s up there with the likes of Zaouli’s Bane and the other top-tier King’s Fall weapons.

I’m going to break down these Tarnished Metal god rolls – justifying my choice of perks and recommending alternative options. It’s been a hot minute since we’ve gotten a weapon this versatile in Destiny 2. There are arguably four or five S-tier Tarnished Metal god rolls, so don’t take my word as gospel. If you don’t like my rolls, make you’re own – you have plenty of options.

This Destiny Tarnished Metal god roll is so good that we’re not even using Explosive Payload. It’s exceedingly rare for a weapon to roll with a top-tier perk like that and for us not to ignore it, but that’s exactly what we’re doing here.

We’re opening our Tarnished Metal roll with the classic combination of Arrowhead Break and Accurized Rounds. As far as scout rifles go, Tarnished Metal has pretty poor range – hence my choice in Accurized Rounds. Arrowhead Break is always a nice pick and helps deal with the scout’s unusually bad recoil – you could swap it out for a barrel that gives more range, though.

Next up is Rapid Hit – an A-tier perk that pops up every now and again in god rolls. The perk increases our stability, and more importantly reload speed, with every precision hit we get up to five. This isn’t typically a go-to perk, but it’s a good backup for a lot of popular rolls.

Rapid Hit isn’t a backup for us, though. We’re taking it specifically for the reload speed buff it gives us because that works exceptionally well with Voltshot. Voltshot is to Arc what Incandescent is to Solar.

When we get a kill with a Voltshot weapon and reload, the next shot you fire will Jolt targets. If you’ve played around with Arc 3.0, then you know how powerful Jolting is – you can clear entire waves of ADs with one shot, and it synergizes with a whole bunch of Arc builds.

There are plenty of other Tarnished Metal god rolls, of course. I mean, you’ve got perks like Explosive Payload, Dragonfly, Swashbuckler, Fourth Time’s the Charm, and more available on it – practically any instance of this weapon will be a god roll. So, if you’re not an Arc or Voltshot fan, then play around with your other options.

All it takes is changing one perk to turn the Tarnished Metal PvE god roll into a top-tier PvP god roll, which speaks volumes about how powerful this weapon is.

Again, I’m opting for the Arrowhead Break/Accurized Rounds combination, but there’s an argument to be made for something like Smallbore, instead. You’ll certainly notice the worse recoil, but if you find yourself struggling to kill targets at range – experiment with other options.

Rapid Hit is staying, which is something of a surprise. However, we’re using it in place of Outlaw to mimic some of the most popular pulse rifle god rolls by combining it with Multikill Clip. Essentially, we’re ending up with a discounted Outlaw/Kill Clip roll here.

With Rapid Hit/Multikill Clip, precision hits will give us faster reloads, and reloading after a kill will give us a temporary 17% damage buff – and that number increases if we get more kills in a short duration before reloading.

Rolls like this are tried-and-tested in the Crucible, and they work – so this should be no different.

As always, if you’re struggling, try experimenting with your other options. Explosive Payload is also a top-tier PvP perk that eliminates the need for range, so play around and see what you can come up with. It’s worth your while, because Tarnished Metal is going to be META for seasons to come.