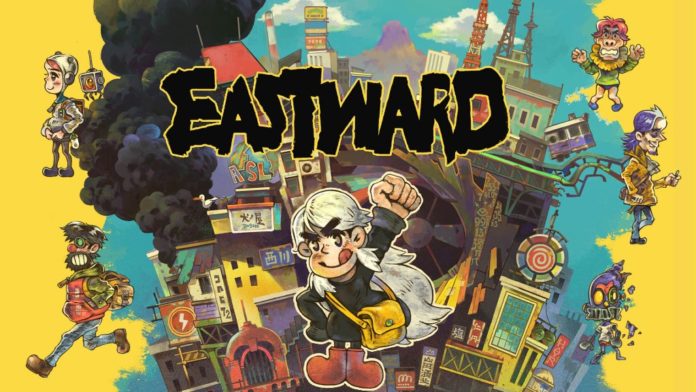 I wasn’t really a big fan of story-based games until I got immersed in this Eastward review. The game’s art style gives me a mix of Zelda, Stardew Valley, and Earthbound – a SNES classic that it’s widely compared to which we’ll quickly take a look. Also, the game gave me a feel of Stranger Things.

There was even this mini-game near the start of my playthrough that felt like I was playing a family computer game within a game. This “family computer game” also had some Earthbound influences on it, which made me research what that game is (talk about Inception).

Here’s a review of my experience with playing as John and Sam in this potentially epic (and spoiler-free) masterpiece.

The Zelda and Earthbound Influence

Judging from the game’s UI alone, we can already see Eastward’s resemblance from Zelda just from the hearts alone.

If we also look at one of the mini-games at the start of your adventure called Earth Born, you would actually see its combat mechanics being very similar to Earthbound.

I have yet to play Earth Born soon in a separate playthrough or probably do a mini-game guide outside this Eastward review.

But if we’re gonna look at the graphics, Earth Born also reminded me of playing the Pokemon Yellow version back in the days when the Game Boy Color was a thing.

I also had a quick peek at some Earthbound YouTube gameplay footage provided by Cinemassacre and I can clearly see where Earth Born’s inspiration was drawn from.

And this is also where I learned that Ness’ origins came from for this SNES classic because honestly, I only knew him as a character in Super Smash Bros and I wasn’t curious enough to explore his origins.

Don’t get me wrong, I still enjoy a lot of AAA games that are out in the market. But when it comes to underrated games such as Eastward, I got surprised to get sucked into the narrative.

The game starts with introducing a hardworking miner named John and a mysterious young white-haired girl named Sam. Eastward is set in the near-future where society is in chaos and you get to explore a couple of bizarre settlements while getting to know each person you encounter.

Some gamers might not be able to appreciate text-based dialogues but this game just hits different. Each world you go into feels like watching through a new TV series while having that retro nostalgia felt great.

I personally even tried voice acting the characters based on what they look like. So I was entertained and curious about how their voice will sound like whenever they blurt out dialogues and I even made a YouTube short out of it.

John almost doesn’t talk throughout the game, you’ll hear grunts from him most of the time. But I enjoyed trying to decipher on how he would sound like when he speaks.

Despite its linear storyline, the game does have a lot of peculiar characters and you can even get Steam achievements just by interacting with these NPCs.

The first impression of the battle mechanics was a bit funny because the moment I saw John put out his weapon I was surprised seeing a frying pan as his main. I immediately got amused as my first reaction was “Is this PUBG?”

Battling weird creatures overall wasn’t stellar but it’s enough to keep you entertained. You can also play as Sam during the latter parts of the story and you can swap between John and Sam in certain situations.

The puzzle aspect of the game isn’t that difficult and most enemies in the game are pretty easy to beat. There will be some cases that you’ll probably get annoyed by the other strange creatures but not to the point that you’ll immediately rage quit.

If ever you’re that type of person who felt lost playing the game in the first few hours, let me give you a piece of advice so you won’t experience the same thing that I went through: take advantage of using your bombs and frying pan.

Although the idea of swapping between characters seemed like a good idea, I feel that Sam could’ve been more utilized during combat. However, she’s very useful when it comes to puzzle solving together with John.

As someone who heavily plays roguelikes like Tribes of Midgard, I wish there was a dodging mechanic but I guess the devs did not include this since the game’s combat system is quite simple.

I do get killed by some mini-bosses from time to time but later on I get used to the patterns that they give making it easy for me to beat eventually.

Cooking Plus Other Minigames to Get You Hooked

Another part of this Eastward review that I like to highlight is the tons of minigames that it has. One of the minigames that I enjoyed was the Cooking Slot Machine. Each unique dish that you create gives you heart bonuses for getting one or two matches in the slot machine while getting three in a row will give you additional energy.

Almost every checkpoint you bump into includes a refrigerator for saving your game and a stove for experimenting with different kinds of dishes. One hack that I usually do if I want to increase my chances of gathering ingredients or materials is I can go back to the previous area and the objects and monsters reset.

There are also a couple of mini-games to explore and keep you occupied. Aside from Earth Born and the Cooking Slot Machine, you also get treated to ranch games such as Sandrupe Harvesting, Blimpig Herding, and even Baseball!

There’s no denying that the team over at Chucklefish pulled off Eastward’s art direction quite well with the game’s bizarre and retro elements.

Eastward is for people who want to bring back their gaming nostalgia in the 80s and 90s era. At the same time, this game also captures an audience who prefer this kind of great storytelling without choking your machine’s specs.

Overall, I enjoyed this Eastward review, and I hope you did too. You can get this game on Steam or on the Nintendo Switch.

Feel free to check out my other hidden gem reviews like Dice Legacy and Lords and Villeins if you enjoy these kinds of games.

This review is based on the PC version of Eastward. The key was provided by Chucklefish

Load more
Eastward Review: A Strange And Breathtaking ExperienceEastward bridges the gap between retro and modern players, giving us an amazing blend of pixel art and curious storytelling. This game is catered to people who appreciate the art and those who love a simple action-adventure visual novel.
Tech