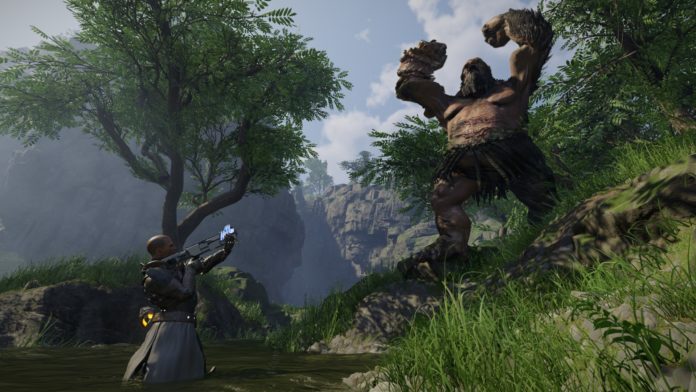 It’s been a while since I played an open-world RPG and I’m excited to share with you my ELEX II review. Upon opening the game for the first time, it already gave me some hints of inspiration from the Horizon and the Mass Effect series in terms of the game’s setting.

After over 30 hours of playing the game, I’ve developed a love-hate relationship with its game mechanics. Are the mess and stress worth it in the world of Magalan?

Let’s take a deep dive into ELEX II and see if it has the chance to become one of the best RPGs released in 2022 after five years of waiting.

ELEX II is the sequel to ELEX, the vintage open-world role-playing experience from the award-winning creators of the Gothic and Risen series, Piranha Bytes. This sequel returns to the post-apocalyptic science-fantasy world of Magalan – filled with massive environments that can be freely explored via jetpack or on foot – you will be able to move through the epic story any way you want.

The game sets several years after Jax defeated the Hybrid. A new threat arrives from the sky, unleashing dangerous powers putting all life on the planet at risk.

In order to defend the peace on Magalan and the safety of his own family, Jax has to go on a mission to convince the factions to unite against the invaders and find his own son, Dex, who got separated from him.

Build your own coalition called the 6th Order where you’ll recruit different people across each faction to help in your cause in a battle against the Skyanders – unknown invaders that consume a more powerful kind of purple resource called Dark Elex.

As someone who hasn’t played the first game, I managed to figure out what happened in the previous installment through the story flashback cutscenes.

But if you do want to play the first game and take a trip down memory lane, you might want to grab ELEX when it goes on sale up to 80% off. It’s not as great as the Witcher but the story might be enough for you to get hooked on this post-apocalyptic sci-fi universe.

This rare resource gives you powers that can boost your experience or attributes. Factions like the Albs are obsessed with Elex that they do heavy research on it to become “efficient” in their day-to-day lives.

Elex gives you attribute and experience point boosts and it’s no wonder why a lot of people want to study and hoard it for their own interests.

While exploring the world of Magalan, you’ll encounter a lot of factions from different areas of the world and here we give you some first impressions of the types of people (or machines) that you’ll meet.

If you won’t be able to choose a faction while you’re progressing in the story, then you can choose the Renegade path but expect your journey to become more challenging because you won’t have any access to exclusive weapons and armor from the other factions.

Depending on how you interact with each faction, you might even end up being enemies with everyone. I personally had a hard time choosing which faction to side on because I always felt like I’m missing out on the other faction perks.

This isn’t the type of RPG where you can spam your attacks at your liking. Expect the ELEX II combat system to be a bit clunky and unforgiving at the same time. I felt like playing Dark Souls after the countless times I died in the hands of random creatures.

I had one mission where I had to beat this “wounded” troll for almost an hour and the XP that it gave me wasn’t that rewarding but it felt fulfilling regardless.

I’ve lost count of the number of times I died from a horde of “normal” enemies. If I had a death counter, I probably died over a hundred times already.

The companion AI could use more work though. It’s frustrating having someone on your side only to become a liability in your progress later on.

Thank goodness for unlimited saves though, making the raging bearable. But sometimes I do forget to save from time to time especially if I beat a challenging enemy and I suddenly die from fall damage because of running out of jetpack fuel.

What I actually loved about this ELEX II review is how they implemented leveling up something that I’ve probably never seen before in an RPG.

Learning abilities require you to find certain teachers around the map in order to learn something, adding points to its realism component. It’s like going to a faraway place to seek an expert in order to learn a specific craft.

However, you need to be very careful in assigning your stats because ELEX II can also become a long grind if you don’t know what you’re doing. I was already Level 15 and I couldn’t equip a more powerful ranged weapon right away because I allocated the wrong stats early on.

Early advice for those who are going to play through ELEX II, try to focus on Strength, Constitution, and Dexterity. These stats are enough to let you carry powerful melee and ranged weapons.

Going around the world of Magalan can get annoying. First off, if you observe your minimap, you won’t see any buildings or paths, making map exploration a tedious chore.

Despite these minor issues, at least we get to enjoy the beautiful visuals this game actually brings. You won’t ever run out of a variety of places to sightsee. I wish it had a photo mode though since the sceneries here are worth making a wallpaper (or NFT – just kidding).

While doing this ELEX II review, I’ve also observed that fast travel locations are pretty challenging to spot so keep this in mind if you plan on finding these teleporters in this large open-world post-apocalyptic mess.

When it comes to meeting a lot of people in this universe, there are surprisingly a lot of side missions and backstories to get yourself occupied with. The voice acting has some hits and misses but overall it does reel you in for hours.

If I’m gonna give my honest opinion on my first playthrough, it was torturing. I really felt the frustration of grinding the stats wrong especially when I realized that I needed to master ranged weapons early in the game instead of relying on companions to do the heavy lifting.

But if you’re up to the challenge of stiff combat mechanics while engaging in countless hours of understanding the story and you’re looking for a cheaper Elden Ring alternative, then you’ll probably enjoy ELEX II.

With plenty of dialogue to digest in ELEX II, it’s decent enough to get you hooked into each faction’s story. However, expect lengthy grinds (and deaths) at the beginning but rewarding loot as you progress if you’re able to find or craft them.

There’s also a ton of replayability in this game as well since you have five factions with each of their unique perks that you can discover. This might not look enjoyable from a casual RPG gamer’s perspective but if you’re a fan of soulslikes or roguelikes like me, it deserves a spot in your library.

ELEX II reels you in an immersive chaotic planet where you try and unite different factions against a new breed of invaders. Despite its stiff combat mechanics that we’re not used to anymore because other games have set the bar in this category, it truly is a huge improvement from its predecessor. Try not to die from fall damage once your jetpack fuel runs out.

We hope you found this ELEX II review helpful. Check out our review for Expeditions: Rome if you’re into history-inspired, turn-based RPG.

This review is based on the PC version of ELEX II. The key was provided by THQ Nordic.

Load more
ELEX II Review: A Sci-Fi RPG Planetary MessJourney across the world of Magalan and learn about how to unite factions against this new breed of invaders or do it alone. Despite the "broken" gameplay and endless hours of raging, ELEX II makes up for its vast open-world exploration filled with stories to tell plus the unexpected chaos that you'll encounter. RPG players might not enjoy the experience as much but for veteran roguelike and souls-like players, it deserves a spot in your gaming library.
Tech