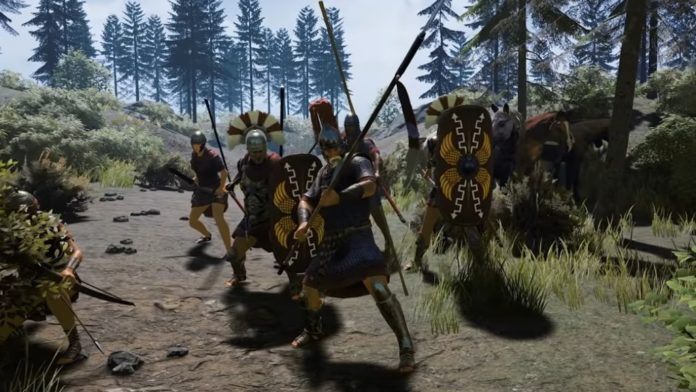 Logic Artists brings us this underrated turn-based strategy masterpiece. In Expeditions: Rome, you get to be a part of Roman history as one of the Legatus who will conquer the rest of the regions around Asia Minor and beyond.

Legatus simply means a high-ranking Roman official with the power to command massive armies. Decent voice acting and engaging dialogues will get you thinking about how you’ll dominate Rome.

Will you use peaceful diplomacy to beat your opponents or will you take them on by force?

After tons of hours of playing through the story, you’ll be surprised how much depth this game actually has. The vibe somewhat reminds us of the Dragon Age series minus the magic. So here’s our spoiler-free Expeditions: Rome review.

At the start of the game, you get to modify your character’s looks. However, the game’s visual customization options for your character are limited so don’t expect much.

But to compensate for the lackluster visual customization is the classes that you get to pick the main class with their appropriate sub-classes which you can mix and match as you progress in the game.

Let’s briefly discuss each of the four character classes that you’ll get to pick.

This is the main defending unit of the Roman legion and they will serve as your tanks whenever you fight off armies. They make a good distraction for your other troops to flank. You can even demoralize your opponents with its AoE skills.

This is also a good starting class for those who want to take the safe route in experiencing Expeditions: Rome.

The Veles is a light but deadly class wherein they have the ability to dual-wield weapons. If used correctly together with the Sagittarius, you can stack strategic combo attacks, quickly wiping off the threats that come your way as long as you deliver the final blows.

This class is pretty tricky to master and I personally recommended it for those who have experience with turn-based games and want a hint of RNG.

If your playstyle is more of ranged combat then Sagittarius is the way to go. This makes a great backline in an encounter and if you position them correctly you can get an offensive advantage early game.

Take note that anyone who’s shielded won’t get damaged from your attacks. So you’re going to need the help of the other classes (particularly the Princeps) to disable the enemies’ shields if you want to utilize its high damage ranged attacks.

This is probably one of the most underrated classes that you can utilize. The Triarius can serve both as a support or a killer. They can do a mix of short and mid-range attacks with their staves.

Triarius also has a couple of buffs and debuffs that can turn the tides of battle and they can even revive your allies in case they get incapacitated. Honestly, I had a hard time picking between this class and the Veles because both had good skill trees.

Your Choices In The World Matter

Praetorians observe your every interaction so choosing the right one can improve your relationship with certain characters. The visual presentation is not as great as other games like Mass Effect or Elder Scrolls Online, but the voice acting in this game will reel you right into the narrative.

Depending on your rhetorical style, you also get to unlock different choices that could turn the tides of certain quests like encouraging someone to turn against their allies. Another sample scenario is when you spare a high-profile official which you can use on other quests later on.

Sparing or killing someone in the game can lead to favorable or unfortunate events in the story so choose wisely.

During the world map explorations, you will be met with random events that can put your legionnaires and companions in danger. Make sure that you have enough medicine and upgraded camps to keep your troops healthy.

Immerse Yourself In Hex Grid Action

In the next section of this Expeditions: Rome review is where the game actually shines –⁠ the combat system.

You can take up to six of your companions and battle it out against pirates and Greek armies. Each weapon you take has its own set of abilities –⁠ even your bare hands can contribute in battle.

There are around seven weapons that you can experiment in the game and you can craft your own powerful weapon once you’ve chosen your play style through the armory.

Be careful when switching targets during your turn as your enemies can give you an attack of opportunity once you disengage with them.

Don’t get too comfortable once you get used to fighting with your legion as you’re also presented with environmental challenges.

Think of creative ways to finish off your enemies by picking up torches or pilums to weaken their offense.

Take Over Regions With Your Army

Expeditions: Rome also gives you the opportunity as a Legatus to command thousands of troops and lead them to victory in this chess-like simulation. However, I was a bit disappointed with how they implemented this mechanic.

I was expecting a Rome: Total War cinematic where you watch these armies clash against each other. I know they were trying to add some variety to tactics but I expected too much for this combat section.

The legion battles have four phases in which you get to pick cards (or “stratgems”) to put your army at an advantage. Every battle won entitles you to acquire rare loot depending on the status of your legion commander.

A minor design flaw with exploring the world map is you might have a hard time spotting the cities and outposts that you have already conquered. It gets a bit annoying whenever enemies are able to recapture your region just because you forgot to garrison your legion in one of your captured cities.

Your legion camp has its own outpost management wherein you can upgrade your facilities to make your army stronger. Build an armory, improve your infirmary, and more as you keep on exploring resources on the world map to have an upper hand against your future enemies.

The camp also provides a barracks where you can assign a legionnaire to recruit skilled troops to join your legion.

Inventory management is a bit messed up as every time you defeat enemies in your encounter, you’ll be able to pick up their weapons and armor. For beginners, it can get a bit overwhelming seeing a lot of equipment lying around and it might take time to figure out your combat preferences.

Personally, it became a chore dismantling a lot of the weapons and armor that I don’t really need for the legion.

This may cause some players to steer away from the administration side of things because they might feel that Expeditions: Rome has a lot of micromanagement – from checking up on your injured legionnaires, making sure that the legion has enough supplies for exploring, etc.⁠

Expect a long journey ahead when exploring and conquering Rome. The game is pretty easy to pick up but you might have a hard time with the grind. Expect a couple of playthrough frustrations in figuring out the right combination of classes to bring into battle.

It was a great effort for Logic Artists and THQ Nordic to put variety in all aspects of the game from storytelling to the battle mechanics. We just wished that it found a way to implement massive scale battles similar to what we see in the Total War series. Even playing this at Normal difficulty already provides a challenge.

Take your time to familiarize yourself and strategize your next moves in war and diplomacy because Rome is a huge chessboard where you’ll be thinking of ways to become an efficient leader.

As of this writing, I managed to finish one conquest in almost 24 hours, that’s how much content this game has and it felt like binge-watching a couple of seasons of Game of Thrones.

Selective nitpicking aside, I think the game’s worth the money especially if you’re a huge fan of Roman history. Not spoiling the story, but I think you’ll be surprised with the developments of the first conquest.

We hope you enjoyed our Expeditions: Rome review. Head over to Steam and take advantage of the 20% pre-order discount and we hope to see you on the battlefield.

For more medieval-themed reviews like this, also check out our review of Wartales.

This review is based on the PC version of Expeditions: Rome. The key was provided by THQ Nordic

Load more
Expeditions: Rome Review | Experience The Legionnaire LifeExpeditions: Rome gives you a mix of social intrigue and hex-style turn-based strategy. Relive the glory days of Rome as a high-ranking military official. Meet companions and hire trusted legionnaires in your quest for dominance. Get immersed with tons of quests and random world map events while maintaining order in your regions and learning more about Roman culture.
Tech