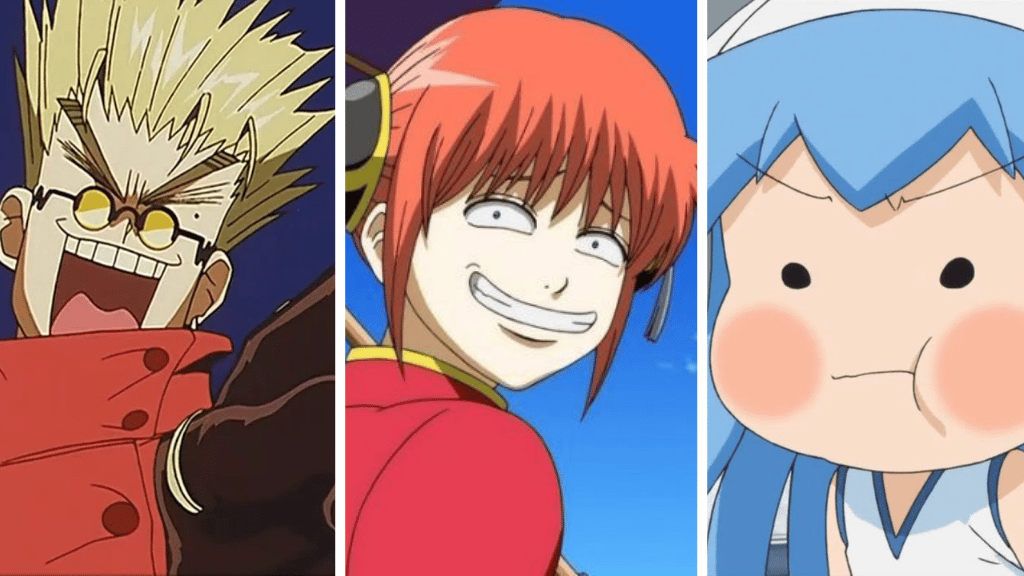 These funny anime faces will surely leave you rolling on the floor.

In fact, some of these characters are so amusing that most of their personality gets overlooked by anime fans.

So, without further ado, let’s see if you can make it through this list without laughing.

How could the strongest man in the universe have a nickname as hilarious as ‘Caped Baldy’.

Even though Saitama wished for a better superhero name, he realizes that ‘Caped Baldy’ perfectly describes his appearance.

In fact, the writers intended for him to look similar to a traditional webcomic, and because of that, he has a very cheaply drawn face.

You would think a championship-level boxer such as Aoki would be a no-nonsense type of guy.

But, in reality, Aoki is the complete opposite as he is reliant on strange froglike attacks and other comical techniques to defeat his opponents after shocking them with his funny anime faces.

What’s more peculiar about Masaru is that he is only attracted to unsightly women.

Few people in this world can look as comical as the pervert Eikichi. His lecherous expressions make it impossible to take him seriously despite his ambitions being highly pure and profound.

To add to his funny demeanor, he likes to display his flamboyance by cosplaying various characters such as Bruce Lee, an angel, and a monkey!

Mamoru Takamura is a man revered for his dominance in the boxing world. After one of his triumphant victories, all the people of Japan had fallen in love with him.

But that look of admiration turned into a look of repugnance as Mamoru made a number of lecherous comments that belittled all the women who were present in the boxing stadium.

Yes, although you may find it hard to believe, that is actually the face of a 7-year-old girl.

Naru Kotoishi is a bubbly young girl who does not have a sense of privacy as she can be seen hiding inside Seishu’s house despite never being invited.

Being the adorable little home invader that she is, she also enjoys spending time with animals and would do anything to protect them.

Ika-chan has one of the most hysterical backstories in all of anime.

She is a squid girl who had arisen from the sea in order to invade the human race in an attempt to punish them for polluting the sea.

Unfortunately, that plan backfired as she was forced to work as a waitress so that she can pay for the gigantic hole she had created in the wall.

Kid is the son of Death himself.

Thanks to that, he is brimming with talent and intellect which is proven by the fact that he is one of the 3 best students in Death Weapon Meister Academy.

After the demise of his father, he assumed the role of Lord Shinigami (God of Death). Last but not the least, he also has an ambition of restoring equilibrium between ‘good’ and ‘evil

Rocking the most bizarre hairstyle on this list is none other than Shinjirou Hayashida from the anime ‘Cromartie High School’.

Although his mohawk is supposed to stay on the front of his head, it is instead seen waving side to side.

Shinjirou looks like a typical tough guy delinquent but that assumption goes out the window when you realize how friendly and mischievous he really is.

Anime eyes are usually known to be shiny and charming but take one look at Caster’s eyes and you’ll quickly find disgust and freakiness.

These rolling eyes are only a part of the mysterious demeanor as Caster has surprisingly fair skin even though one can notice that he is a man of old age.

Although the current version of Naruto is much more serious and dignified, his younger version was quite the trouble maker and made several funny anime faces.

In fact, one of the nicknames given to him was ‘number one unpredictable noisy ninja’. He was also known as the ‘number one hyperactive, knuckleheaded ninja.

Despite, his mischievous lifestyle, Naruto was a very talented ninja who was able to master many techniques from quite a young age.

Sanji is the ultra-pervert of Luffy’s crew.

After witnessing a mermaid for the first time, he inflicted upon himself such a devastating nosebleed that at one point, fans began to question if his life would come to an end due to blood loss.

Fortunately, he was able to receive a blood transfusion in the nick of time, and thus, his life was saved.

When Lord Beerus declared that Monaka was the strongest character in the universe, people were beyond shocked as they could not believe such an unintimidating deliveryman could actually possess all that skill.

Jiraiya is known as one of the three legendary fighters belonging to the hidden leaf village.

His prodigal skills could have been taken to the next level if he hadn’t spent so many hours trying to peep at naked women.

In spite of his lecherous ways, Jiraiya was also renowned for being the mentor of Naruto who was able to save the hidden leaf thanks to Jiraiya’s teachings

Despite the way he looks, he is the most reliable of the five first-year boys in an all-girls high school named Hachimitsu Academy.

Takehito likes to use his intelligence in order to plot master plans that will lead to a successful prison escape.

Before joining Hachiimitsu, Takehito spent most of his time in the library being an Otaku.

Just as his name suggests, ‘The humanoid typhoon’ is a magnet when it comes to attracting destruction and mayhem.

Vash is not even a human as he is defined as a “plant” which is a term given to inter-dimensional beings that are used as a source of energy for the planet Gunsmoke.

Vash is one of the independent plants and is, therefore, able to use that awesome power for his own destructive wishes.

Todomatsu is the youngest of the sextuplets and is also the most fashionable among them as he can be seen wearing western-style clothing.

His fashion sense also causes him to be very popular with the ladies, which can be inferred from the fact that he was once seen going on a date with two women at the same time.

Raku made one of the best jokes in anime history when he called Chitoge a gorilla when in reality she is one of the most gorgeous women he ever had the pleasure of meeting.

What’s best about Raku is that he is very kindhearted and loving which is proven by the fact that he likes to walk in harm’s way in order to protect someone close to him.

Luffy is a man who needs no introductions. His quest to become the pirate king has included an endless (1000+ episodes) supply of entertainment for us anime fans.

Despite having one of the largest bounties in the show, he seems to be quite foolish and lackadaisical as he can usually be seen doing something really hilarious.

Kintarou Ooe might just be the most perverted man on this list as his perversion is so deep that he actually used his janitorial job so that he can feel a woman’s warmth that is left on the toilet seat.

In spite of his weird fetishes, Kintarou is a very intelligent young man who had lots of talent when it comes to programming new software.

Initially, Kagura comes off as a lovely woman thanks to her light red hair and her ocean blue eyes. However, when she makes funny anime faces, she has a very funny outlook.

In fact, one of Kagura’s friends actually refer to her as an ‘ultra-hot China girl’. This should be a testament to her beauty.

I hope you had a great laugh while reading this post about funny anime faces.

Which of these 20 characters did you find the most hilarious? Was it Caster because of those peculiar eyes?

Or was it Masaru Aoki thanks to his froglike expressions?

Either way, let us know what you think by leaving a comment down below.