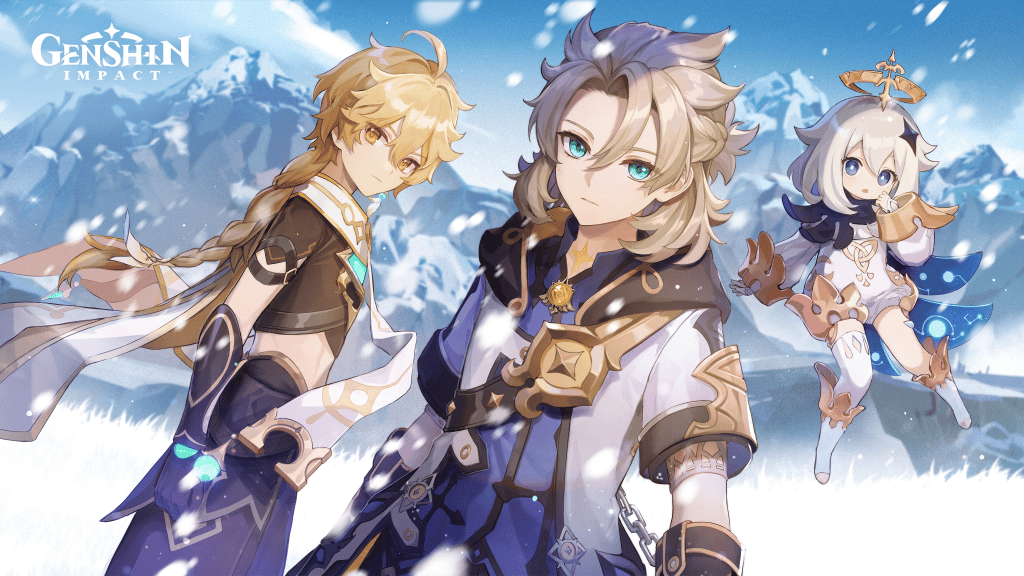 Hello, travellers! We’re here again with another summary of the Genshin Impact 2.3 update coming in just a few days. Are you excited? The Genshin Impact 2.3 Special Program: Shadow Amidst Snowstorms lasted for 40 minutes and showcased different quests, events, and characters to look forward to. In their chibi forms, Aether, Goroi, and Albedo hosted the event. If you missed the live stream, here’s a breakdown especially for you!

Last month, the official Twitter account of Genshin Impact dropped a bomb when they posted a sneak peek of the upcoming 5-star Geo character, Arataki Itto. Shortly after, the Genshin fanbase blew up after seeing the new 5-star we all can bring home to our party.

Arataki Itto wields a Geo vision and uses a Claymore. He is the leader of the infamous Arataki Gang. Itto is not human and is an Oni, which translates as demon in English. One reason why Genshin fans immediately were drawn to this Oni is because of his fighting style animation.

Itto’s Elemental Skill is called Masatsu Zetsugi: Akaushi Burst. Once activated, Itto hurls a bull into the battlefield that deals Geo DMG to nearby opponents. Unlike what we’ve seen in other characters with companions, Itto’s bull taunts surrounding opponents and draws their attack to it. Cool, right?

Next, Itto’s Elemental Burst Royal Descent: Behold, Itto the Evil unleashes the Arataki Gang leader’s inner demon. All of Itto’s Normal, Charged, and Plunging attacks are converted into Geo DMG in this state.

During the Vision Hunt Decree, travellers first saw the 4-star Geo character Gorou. Fighting alongside the Divine Priestess of Watatsumi Island Kokomi, Gorou was shown as a brave and reliable general that led the Watatsumi forces. Gorou havers will be happy Gorou wanters when the canine warrior’s banner releases alongside Itto’s.

Gorou fights with a Bow and yields a Geo vision. His Elemental Skill Inuzaka All-Round Defense inflicts AoE Geo DMG and plants a General’s War Banner on the ground, giving your team different buffs and scales depending on how many Geo active characters you have.

Next, his Elemental Burst Juuga: Forward Unto Victory is similar to his Skill. It also deals AoE Geo DMG with buffs that scale off of the number of Geo characters on the active team.

A new wishing system is coming to Genshin Impact for the first time ever. The phase one rerun banner features the Chief Alchemist Albedo and the Captain of the Knights of Favonius Reconnaissance Company, Eula Lawrence. These two 5-star characters’ banners will be running at the same time. You heard that right. You can spend your primos for either one depending on who you want to get.

MiHoYo’s development team decided to try out this new wishing style to give newer players a chance to get their favourite character. Instead of waiting months for a rerun, you get a chance to get them earlier with this new system. The Secretum Secretorum banner of Albedo and the Born of Ocean Swell of Eula will share the same wish counter.

This means if you’ve reached 50 pulls in Alebdo’s banner and still haven’t gotten a 5-star, you can switch over to Eula’s banner and continue pulling with the same pity. Phase two banner will have Arataki Itto and Gorou.

Aside from the two new characters coming to the 2.3 update, players also get a new quest: Taurus Iracundus Act I. This quest tackles Arataki Itto’s back story and a look into the lives of the other Onis like Itto.

In the 2.2 Genshin update, travellers got hangout events for Thoma and Sayu. Have you completed those already? If you haven’t, be sure to check it out!

In the upcoming update, travellers can battle the new boss enemy Golden Wolflord. Test your skills and patience against this oversized Rifthound that floats in the sky and wields a Geo vision.

After installing the new update, you should head on over to your Serenitea Pot for a surprise. Travellers can now add Paimon in their pot! She has a lot to share with you, so be sure to talk to her as soon as you can.

The main event coming to version 2.3 of Genshin Impact is Shadows Amidst Snowstorms. Travellers will find themselves returning to the frigid lands of Dragonspine. During this event, the Adventurer’s Guild will be holding a training guild in, you guessed it, Dragonspine. We will reunite with characters like Amber, Eula, Albedo, and Bennet throughout the event.

All three training exercises give event currencies to exchange for Mora, primogems, and other items. In addition, travellers can obtain snowman parts to build a personalized snowman in-game—cue in Anna, asking Elsa to build a snowman with her. You can even trade snowman parts with your friends to create a memorable snow figure!

The next event coming to patch 2.3 is entitled Bantan Sango Case Files: The Warrior Dog. During the event, you are commissioned to discover the reason behind the unexplained disappearance of animals in Inazuma. Take a break from killing slimes and samurais and become an animal rescuer. Complete this quest to gain different rewards, including primogems.

Travellers will be able to add new animals to their Serenitea Pot through the new gadget “Omni-Ubiquity Net.” When equipped, the device allows you to aim at a small animal in Teyvat, like the roaming foxes in Inazuma, and catch them with a net. Once caught, a replication of the small species will appear in your teapot. Head over to your archive to see the list of animals you can replicate.

The Energy Amplifier Fruition event is a continuation of the previous energy amplifier events. Mutation stones are once again resurfacing. In this version, you’ll need to head over to the designated location to eliminate enemies. This event offers a hefty sum of primogems, so be sure to participate!

Misty Dungeon is another event that makes a reappearance. If you took part in the previous dungeon event, you’d already know what you need to do. Travellers can use the trial characters available to complete multiple dungeon trials. You’ll need to complete the dungeon sequences to try out the final dungeon. For this patch’s Misty Dungeon, you’ll get to try out a new set of trial characters. How fun!

The last recurring event to appear in the upcoming patch is Liben’s “Box o’ Marvels.” Just like the previous Marvelous Merchandise event, travellers will need to provide Liben with a set of materials to obtain various rewards. Search for Liben and submit the materials he requests for easy primogems!

What are you most excited about with the upcoming update? (It’s Arataki Itto, right?) You still have a few more days to finish quests and farm for materials until the new update launches. Good luck, travellers!

Skull and Bones Has Been Delayed to March 2023