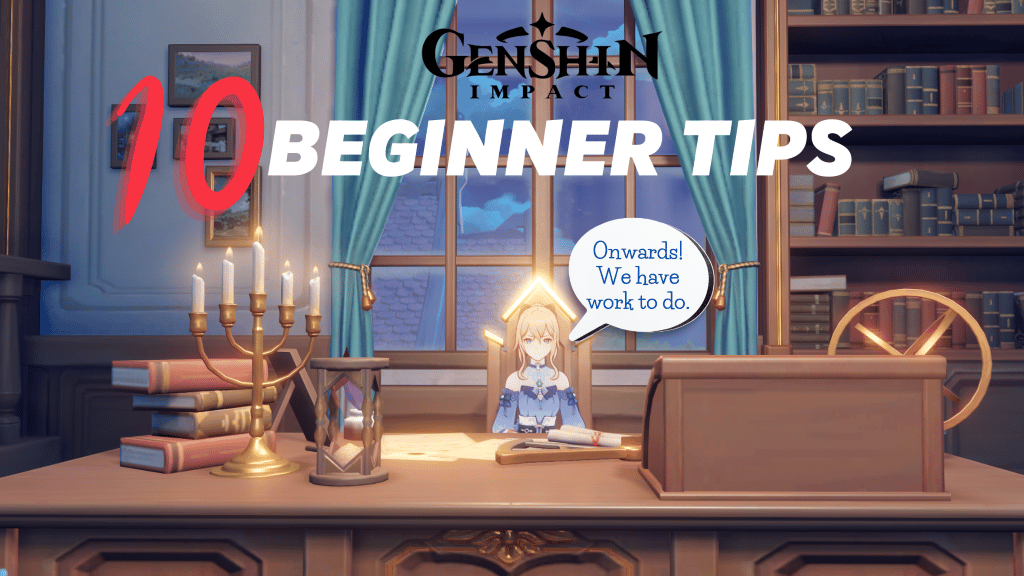 Welcome to the dark side future Traveller. We’ll take it that you’ve succumbed to temptation and installed Genshin Impact on your PC, phone, or tablet. As first-timers, this open-world adventure game can be a lot to swallow. You might have been drawn to it because of the eye candy characters or the game’s mechanics; whichever the case, you made the right decision.

Primogems? Wishing for characters? Spiral Abyss? Where to start. We’re here to give you some useful beginner tips so that you’ll enjoy the game and not regret your actions in the future when you’ve reached higher levels or Adventure Rank, as it’s called in Genshin lingo.

You’ve finished the cutscenes and start walking around Teyvat with your flying partner Paimon. Now what? Pick up ANY items you see on the ground. That’s not a drill. From here onwards, you’ll be a certified hoarder.

The more you immerse yourself in the game, the more you realise that there are always retrievable items around you. You can also “Investigate” certain areas like crates, boxes, campsites, and much more to pick up items. You can find all sorts of drops from low artifact pieces, fruits, vegetables, and Mora.

Whether it’s a Sweet Flower or Mint, pick them up. You’ll never know when you’ll need them.

Familiarise Yourself With the Different Elements

The seven elements in Genshin Impact are the following: Pyro, Hydro, Anemo, Electro, Dendro, Cryo and Geo. The most efficient way to defeat enemies is by utilising the reactions of these elements. For example, you can proc the reaction Melt with Pyro (fire) and Cryo (ice). Playing the game with a rough idea of how the elements interact will help you build stronger teams and defeat bosses easier.

You can check out a detailed breakdown of the Genshin Impact elements and their reactions in this article. It’s worth taking the time to read about them before attempting big boss fights.

Wasting Primos or resources is a beginner Genshin player’s biggest mistake. In the game, the currency to wish for a character is called a Primogem. One wish equals 160 Primogems.

There are multiple ways to gain Primogems, or Primos for short. You can explore the vast Genshin world and open chests, join in-game events, do quests, and much more. And, of course, you could purchase gems in the store. Characters are available through their respective Banners, and each banner runs for around three weeks.

If you plan to play the game without spending money on it, you’ll need to plan your steps way ahead of time. You won’t have the liberty of wishing for every new character that comes out as a free to play (F2P) player. Luckily wishes you make on the Character Event Banners carry over to succeeding Banners. This means if you wish 45 times in this month’s Banner, those wishes carry over when a new character is released.

Sadly, the gambling doesn’t stop there. When you wish for a 5-star character on their respective Event Banner, you’re not guaranteed to get that character. You have a 50/50 chance of getting the limited edition character or one of these 5-stars (Mona, Diluc, Jean, Qiqi, Keqing.) However, if you fail a 50/50, you’re guaranteed to get your 5-star on your next pulls.

Another important tip is not to spend your resources (Mora, Talent Books, etc.) by maxing out every character you get. Think about who you want to build, and level up the characters you want to play. Don’t level up a character you don’t plan on using unless you have the resources to.

Optimise Your Party to Suit Your Needs

The beauty of Genshin Impact is that it caters to different types of gamers. Chill, laid-back players will enjoy the game as much as hardcore, Excel-calculating Travellers will.

When you have a few characters in your party, the next important tip as a beginner player is to create a party for your goals. There are generally four roles in Genshin Impact. These are the Main DPS (damage per second) or Carry, the Sub-DPS/Burst Carry (relies on Elemental Burst DMG), the Enabler (helps the Carry by applying elemental status on enemies, and the Support (healers, shielders, buffers).

Think about these roles when building your party for battling or completing the Abyss. You’ll need one character to fit each role for optimal DMG output. However, if you’re just exploring the map, go ahead and use whoever you wish. Some characters like Sucrose, Kazuha, and Venti are great for fighting mobs with. Their abilities group the enemies together, making it easier for you to kill.

In addition, there are also characters like Albedo, Zhongli, and the Geo Traveller, whose skills create pillars for you to hop or climb on. These make it easier to reach higher spots while saving your Stamina.

Complete Your Daily Commissions for Primos

The best way to gain Primogems is by completing your Daily Commissions. What are Commissions? These are four mini-quests players receive daily that give you 60 Primogems. You must complete the World Quest “Every Day a New Adventure” and reach Adventure Rank 12 beforehand. On every server reset, you get four more Daily Commissions.

Genshin Servers reset daily at 4 AM (server time). However, this will vary depending on the region you’re playing. For example, servers reset at 9:00 PM in the UK, and 5:00 AM in Japan.

Conveniently, you can set your Commissions to appear in either Monstadt, Liyue, or Inazuma. Here’s a tip: set your Comms to a region you’re currently exploring. So while you’re completing the quest, you’ll be able to open chests along the way.

Don’t Use Fragile Resin Until AR 45

Another big mistake a beginner player can make is spending Fragile Resin early on in the game. Fragile Resin is an item that immediately restores 60 Original Resin. As your Adventure Rank increases, you get rewarded Fragile Resin. You can also get the item by buying the Battle Pass and through other events.

If you plan to use your Fragile Resin to farm Artifacts, it’s better to wait until you reach Adventure Rank 45 to use them. This is because, at this rank, you’re guaranteed a 5-star artifact drop, compared to farming at lower AR, where you’ll only get purple drops.

You’ll thank us later if you follow this advice. When you’re at higher AR and want to farm all day, you’ll have the resources to do it, thanks to all the Fragile Resin you’ve saved.

You can’t call yourself a true beginner Genshin player without having fallen off a cliff because you ran out of Stamina. Your character’s Stamina meter is a yellow bar that decreases whenever the character sprints (dodges), climbs, swims, or glides. Performing Charged Attacks also depletes your character’s Stamina. Luckily, if you run out of Stamina, all you need to do is stand still as you naturally regenerate at 25 Stamina per second.

However, you can also eat specific dishes that regenerates your Stamina faster. It’s handy to have these dishes in your inventory when you’re running low on Stamina while climbing a mountain. You can stop, chow down on snacks, then continue your ascent.

One of the worst things that can happen to you is running out of Stamina midflight or climb and tumbling down to your death. Yikes. Luckily, unlike other games, you don’t wake up losing all your items or progress so far. If you die, you simply wake up where you left off.

Save Your Billet Drops

Some believe that prototype billet drops are rarer than pulling a 5-star. The average drop rate for one is 12%. This means you have a chance of getting a billet every 8 to 9 Weekly Boss Fights. Some unlucky Travellers don’t even pull one after reaching that threshold. If you’re just starting out and get one of these drops, save it for future use. Remember: billet drops are ultra-rare and appear once in a blue moon.

Another useful but not that popular tip is reading the loading screen trivia. You’d be surprised; maybe you’ll find the answer to the question you were wondering about on your game’s screen. Many players don’t take the time to read the words on the loading screen, and they’re missing out. Take the time to read the tips, especially if you have slow internet connection. In this case, you have no choice but to read it.

The final tip for beginner Genshin players is to make a farming routine that suits your play style. If you’re a casual Traveller who doesn’t mind their Resin capping, then take your time and play at your own pace. However, if you want to efficiently play the game and not cap your Resin, then try to log in and do your Daily Commissions around the same time every day.

We’ve found that it’s easier to do the Commissions and consume Resin at the same time daily. You can also turn your Original Resin into Condensed Resin if you don’t have time to use all 160 in one go. Whatever the case, try to make sure it’s not left at 160/160.

Another useful tip is to take note of all the materials you need to farm for your characters and weapons. Certain Domains are only available three times in one week, and most of them are available on weekends.

The general rule of thumb to remember when it comes to the order of importance when farming/levelling is:

Spend your Resin and More based on the list above. Levelling up a character is the highest priority, while farming for artifacts is the least important and should come last. Artifact farming depends highly on RNG, and spending your Resin on that is wasteful at lower levels.

Statues of the Seven Heal

Some additional tips worth mentioning is that all Statues of the Seven heal and revive fallen characters. If you’re low on health and don’t have a resident healer in the party, simply teleport to any Statue you’ve unlocked and stand by the tower. It’s as simple as that.

Mark Spots on the Map

Another useful tip is to mark spots on the map for your convenience. If there’s a chest, a resource, a puzzle, or maybe even a picturesque location you want to return to another time, mark it. The Genshin Impact open-world is too vast to keep only a mental note; you’ll surely forget the location without a physical marking.

If you’ve reached this far in the article, pat yourself in the back. We hope these useful beginner tips will help you in your Genshin adventure. If you have any questions about the game and how it works, feel free to leave a comment below!